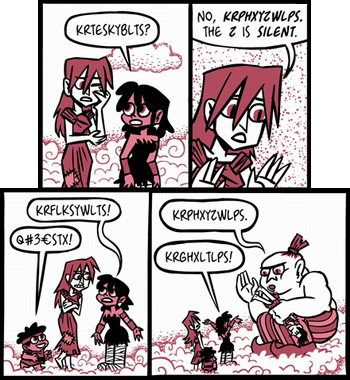 Foreign names can be difficult to pronounce for English speakers, but the names of aliens and monsters are often worse still.

In the mildest version, the character's name is simply unusually long, set up with a phonetic maze like a Tongue Twister, or merely linguistically bizarre even given where it originates; Romanadvoratrelundar, Nahasapeemapetilon, Vijayaraghavensatyanaryanamurthy, Asmoranomardicadaistinaculdacar, Wendissofigelroc, Abalamahalamatandra, Maheswaran. Pronouncing names like these correctly is a sign of linguistic skill. Mispronouncing them is allegedly funny.

In practice, most languages contain at least one sound, or sound combination, not allowed in English. Names containing such sounds will always be unpronounceable, though spelling may obscure this. Naturally, this works both ways. English has more sounds than most other major languages, and its speakers pile up consonants in ways which the rest of the world wouldn't dream of, so it is rich in unpronounceable names. Some languages even have linguistic variables that don't affect meaning at all in English — most famously, changing voice-pitch of a Chinese word changes its meaning,note In some variants of the language, there are up to nine words that could be pronounced from a single character whereas in English tone doesn't do much other than change the emphasis of a sentence.

Characters who are seriously alien, and/or members of The Legions of Hell, get names genuinely unpronounceable in English. Mostly, they get names intended to be unpronounceable by a human mouth at all, but guaranteeing that requires some familiarity with other languages than English. Here is where Pronouncing My Name for You will not help the listeners.

Curiously, these same unpronounceable names can almost always still be written in the Latin alphabet: Cthulhu, Mxyzptlk, WxrtHltl-jwlpklz. (Of course, there is no guarantee that what is written down sounds anything like the actual pronunciation - "bark" and "woof" isn't exactly what a dog sounds like, but is the closest we can get.) They are more commonly seen in print than on screen, since most actors are not stunt linguists. When they do appear on TV, if the character is friendly they'll get called something easier to say. Giving someone who is supposed to be awe-inspiring and mysterious a shortened and silly nickname is also a way of humanizing them — or even humiliating them, if they're a bad guy.

At the more extreme end of the unpronounceable scale are names which aren't even recognizable as "words". You can't say them or write them down. These tend to appear either in hard science fiction, or as parody. The serious variants are often described as animal or other noises — roars, grunts, clicks, pops, etc. Parody variants typically get elaborate descriptions, such as "a name which sounds approximately like a trolley of squawking chickens being chased downhill by a bagpipe player on horseback, but played backwards at twice the speed". Names like this are easy enough to do as sound effects, but difficult to handle in print.

Beyond even that are the names which aren't sounds at all — a flash of green light and the smell of roses, binary code, telepathy, and so on.

When it's even possible, correctly pronouncing the most extreme names is often actually dangerous — you could damage body and/or soul or call forth unspeakable evil.

Names which aren't even comprehensible are usually reserved for particularly Eldritch Abominations, or the REALLY seriously alien.

See also Punctuation Shaker and Word Purée Title. Compare No Pronunciation Guide, Some Call Me "Tim" and My Name Is ???.