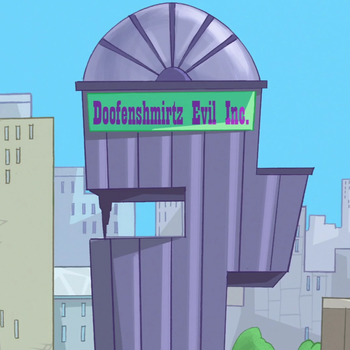 "The NEVIC corporation, who are evil because they're a corporation in a sci-fi game. They might as well have been called There's Shit We're Not Telling You Ltd. Formerly traded as Hope You Haven't Watched Any Alien Films Lately PLC."
— Zero Punctuation, Lost Planet 3
Advertisement:

Evil Inc. is the standard enemy organization in a lot of works- a corporation out to make money and/or gain power through some form of villainy. Often a Lex Luthor back-up plan: Create a front that, in case anything goes wrong, gives you the perfect alibi as well as the resources to start again. They will be one of three types:

Regardless of which type, they will typically have one of two basic goals: make as much money as possible regardless of who suffers, and Take Over the World.

When Evil Inc. would make more money without being used as an evil front, it's an example of Cut Lex Luthor a Check. When Evil Inc. is a legion of super heroes gone awry, it's a subversion of Heroes "R" Us. When it's actually succeeded, more or less, in taking over the world, it's turned into Mega-Corp. When the Evil Inc. masquerades themselves behind their nice-sounding names and publicity, then they are Peace & Love Incorporated. Toxic, Inc. is a subtrope, where the company is depicted as not just evil but with a specific focus on pollution. Compare Incompetence, Inc., which can overlap.