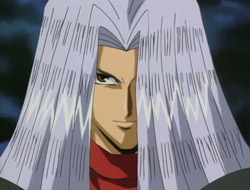 CEO and founder of Industrial Illusions and creator of the children's card game Duel Monsters. When his wife-to-be inexplicably exploded at the altar, he went to Egypt and received the Millennium Eye from Shadi. He hides his sorrows and true intentions behind a gay facade. And we mean that literally. He used the first tournament to gather souls to bring back Cecelia, but lost to Yugi. After releasing the people he turned into trading cards he was killed by Yami Bakura... temporarily. Surgery has made broad advances, and Pegasus is back and more fabulous than ever before.

Yami Bakura / Florence / The Spirit of the Millennium Ring 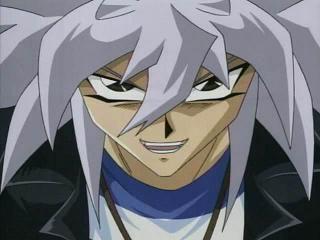 The spirit within the Millennium Ring. Yami Bakura, whose name is actually Florence, is the definition of evil: sadistic, sarcastic, and trying to steal Yami's screentime. It is because of this, however, that he has a legion of fangirls at his beck and call. After Dueling Kingdom he lay dormant until Marik's arrival, where he struck a deal to assist him in his cause, since they shared similar agendas. After Melvin assumed direct control of Marik's body, he outed him as a spy for 4Kids and challenged him. He lost and died, but after Marik regained control, it seems Florence is back, albeit he will be swept aside to make way for Dartz and his Evil Motorcycle Riding Henchmen.

He's a prominent Breakout Character of the series with Marik, and the two star in several side projects including fanfiction and the Evil Council videos. 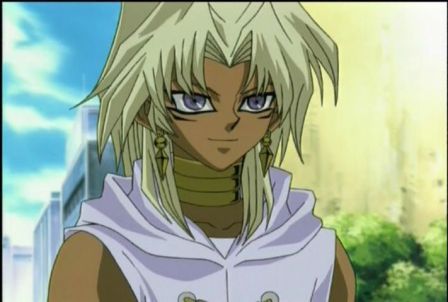 "I don't want to kill you, I just want to destroy you a little!"

Marik is the successor to the tomb keepers of the Pharaoh and the leader of the Rare Hunters. Like Yami Bakura, he wants to take the Pharaoh's screentime, and so he sends his minions into the Battle City tournament to destroy Yugi a little (not kill, destroy). He possesses the Millennium Rod, which allows the user to brainwash anyone with "Steve" or any variation thereof in their name. When he was young, Marik yearned for a life better than one spent underground, and the trauma of living with an abusive father and undergoing ritualistic scarring created an alternate personality/imaginary friend, "Melvin." Melvin personality was sealed away for some time, but at the end of Season 2 he emerged and banished Marik from his mind. However, he reclaimed his body and reformed at the end of Season 3.

A Breakout Character of the series with Bakura, Marik is featured in numerous side-videos, most notably the Evil Council videos, where he annually (or did; the videos have seemingly been discontinued by Little Kuriboh) called together other villains to scheme against Yugi. None of them ever got anything does. He even has his own Let's Play, Marik Plays Bloodlines, where he plays Vampire: The Masquerade – Bloodlines. 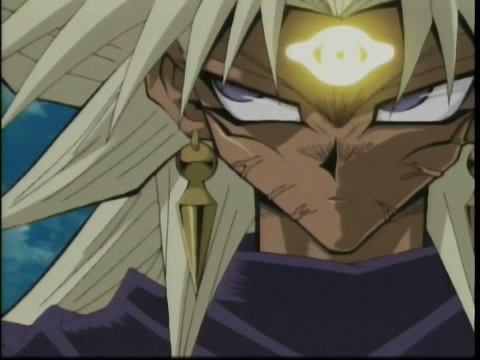 "Come over here and let me cut you, I mean hug you. Hugging is what I meant."

Marik's alter-ego-slash-imaginary friend, born from his childhood trauma of being tattooed during the tombkeeper initiation ritual. When Odion was struck by Ra's divine wrath, the mental seals on Melvin weakened, and he resurfaced. Unlike Marik who wants to destroy Yami, Melvin just wants a hug. And by "a hug" we mean "to stab you with a chainsaw or any other weapon on hand". And he loves hugging people.

At the end of Season 2 he is revealed to be a spy for 4Kids, sent to get the show cancelled. Bakura duels him to try and save the show, but is defeated. Melvin thus destroys the Fourth Wall and the show is canceled. However, boredom slowly starts to set in during The Cancelled Series due to him becoming a sub-character, and he goes on another destruction spree that inadvertently gets the show Un-Canceled. With his former employers now dead, Melvin was once again the main villain… until Marik was able to regain control of his body and finally destroyed Melvin for good. 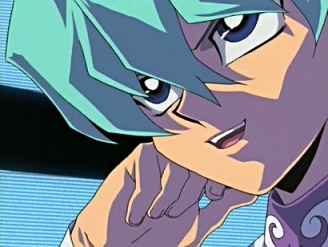 The biological son of Seto's and Mokuba's adoptive father Gozaburo, and CEO of 4Kids. In league with the Big Five to attempt to take down the show for good. Certifiable nutjob who wants revenge against Kaiba for stealing his life. Noah lived (somewhat) happily with Gozaburo until he was killed in a car accident. What remained of his mind was uploaded to the internet. Unbeknownst to him, Joey and Serenity are indirectly responsible for his death. Serenity, as it turns out, was the one who ran him over while learning how to drive. Regains his sanity — or something — upon hijacking Mokuba's body and returning with it to the real world. Then returns to the Internet to save the main characters, and destroy Gozaburo and himself. 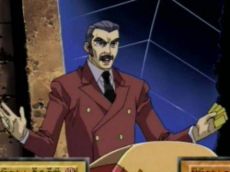 "Listen, small person. There's no such thing as bad publicity."

Former CEO of Kaiba Corporation. Considers anyone beneath him a "small person" and will occasionally poke fun at their misfortune. Do not enrage him if you value your ears. Was fired by Seto and Mokuba and committed suicide in disgrace. But, just like in the source material he faked his death and actually inserted himself into the Virtual World in order to manipulate KaibaCorp from behind the scenes. At any rate his plan backfired and he was killed by his biological son Noah. 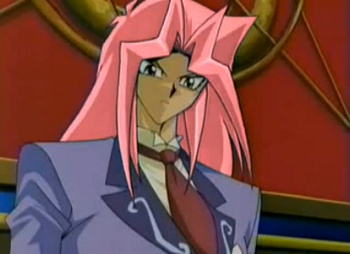 Voiced by Takahata101 of Team Four Star since Evil Council 3.

The former king of Atlantis and Big Bad of Season 4. Dartz is biding his time by gathering his own cabal of villains to counter Marik's Evil Council; with both having yet to accomplish anything. He finally made his proper debut in the main series in episode 64, alongside his motorcycle-riding henchmen.

The great beast that Dartz unleashes after gaining three Egyptian God Cards. As opposed to the anime series, Abridged Leviathan is Dartz' attack-dog instead of his master.

A rich and flamboyant businessman with gorgeous long-flowing hair, who has taken a fascination with Kaiba and his company. And isn't Pegasus.
Zorc 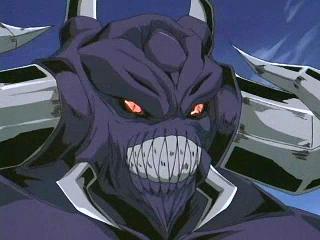 "And now it's time to destroy the world, again!"

A dark god and famous TV celebrity. Was at first the star of Zorc & Pals with Florence, but it got cancelled. However, Zorc bounced back by performing in The Suite Life of Zorc & Cody. He loves destruction, especially of the worldly kind.

The villain of The Movie. He's a throw-away character with generic motives no one gives a damn about. He's going to defeat the Pharaoh and destroy the world because... reasons.

The villain of Bonds Beyond Time Abridged. Basically the same as Anubis, but IN 3D!!!