A water duelist who is mocked for his obsession with fish, something he hates.

Prof. Hawkins's granddaughter, she first appears in episode 20 where she challenges Yugi for Solomon's Blue Eyes White Dragon, until she learns that it was ripped in half. Later returns in episode 65, where she appears to have developed an obvious crush on Yugi, who seems oblivious about it. In general, She's… not quite right in the head, as evidenced by her friend, Teddy, who may or may not be the Devil himself. 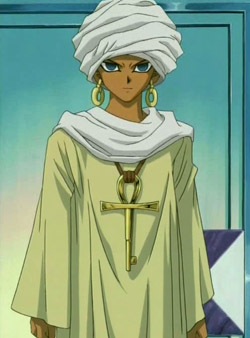 "Jagshemash! My name is Shadi!"

Shadi is the ancient guardian of the Millennium Items, but he's not very good at his job since they kept getting stolen.

Monster cards created by Maximillion Pegasus. They are children's trading cards with the powers of actual Egyptian gods, confirmation if ever needed that card games are serious business. They are Obelisk the Tormentor, Slypher the Executive Producer and Mega Ultra Chicken. Come Season 4 they have their original names again.

The Cybernetic Ghost of Christmas Past from the Future

The Cybernetic Ghost of Christmas Past from the Future

A robot from the future… or the past… maybe? It appears to Kaiba in visions to help him. Or at least, it tries to. Mostly it just annoys and confuses him. 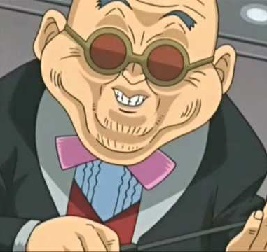 Some "giant-faced mutant" Gozaburo hired as a Butler. Appears in Kaiba's flashback during The Cancelled Series. Also is the one who helped Seto take the company away from Gozaburo by giving his shares.

"Why does everyone wanna have sex in front of me?!"

The Distaff Counterpart of Yugi's ace card, the Dark Magician. In Season 4, the Duel Monster spirit that the card is based on calls forth The Chosen Ones note The two Yugis, Kaiba, and Joey to awaken three legendary dragons and save the world from the Great Leviathan.

The Three Legendary Dragons
The three almighty beasts that are sealed in stone after defeating a great evil known as The Great Leviathan. They are reawakened when Dark Magician Girl sent Yugi (both of them), Kaiba, and Joey to release them and wield their great power.
Advertisement:

A never-before seen character who is reportedly Yugi’s best friend. He hates playing card games, so Kaiba tries to kidnap him to force him to take part in a card game tournament. Only appears in The Other Abridged Movie.

A strange, blue-haired girl that tends to appear when the Season Zero animation is used. Despite usually being seen around Yugi and his friends, they hardly ever notice she’s there. 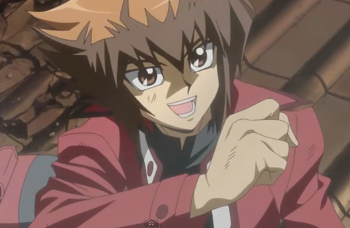 "Aw yeah! Looks like we chillin' with the King Of Games biatches! This shit be ballin'!"

The hyperactive protagonist from Yu-Gi-Oh! GX, who thinks he’s black, loves to spontaneously rap, and is highly disliked by other characters.

One of Jaden's two "imaginary friends", aka "the demon living inside my head." Actually a living spirit residing in the actual card "Yubel."

A side character from Yu-Gi-Oh! GX who accompanies Jaden in Bonds Beyond Time in spirit form. 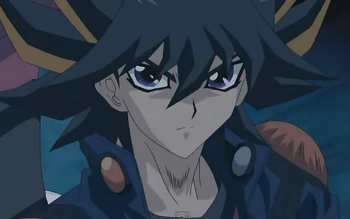 The protagonist of Yu-Gi-Oh! 5Ds. He's one of the saner characters in the series, despite the fact that he dates his bike. He has an incredibly nice voice.

Another main character from 5D's. Likes CARD GAMES ON MOTORCYCLES and has No Indoor Voice.

The female lead of 5D's. She is desperately in love with Yusei, but it's highly unlikely to go anywhere since he's dating his motorcycle.

Voiced by: Chris "Kirbopher" Niosi
Protagonist of Yu-Gi-Oh! ZEXAL. Cameos at the end of Bonds Beyond Time.

The Slender Man, aka Jack Slenderman 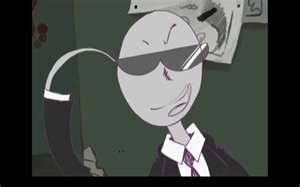 The Slender Man. Know him. Fear him. Give him $20 or he'll ruin your movie. And possibly eat some kids along the way. Was formerly Bakura's college roommate, and has made several guest appearances in the spinoff videos, though he hasn't appeared in the actual material. Yet. Appeared as the Third Angel in LittleKuriboh's Card Games For Charity NGE One-Shot