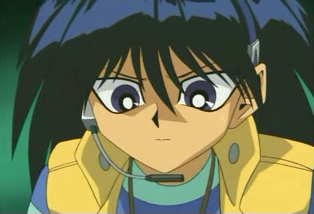 Seto's little brother, who he cares nothing about. He's frequently told to shut up and gets kidnapped a lot, and Kaiba is completely flippant about it at this point. His true father is Nappa. Ghost Nappa, to be precise. Probably, but likely not. 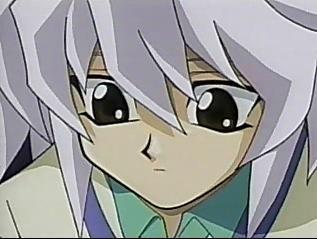 The present-time Bakura. Quite effeminate, and very, very British, he tends to get pushed in the background a lot by his evil side, who possesses the Millennium Ring. 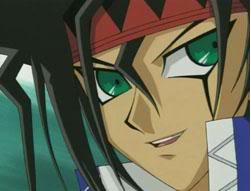 "You guys are making me sexy. You won't like me when I'm sexy."

Duke Devlin is the creator of Dungeon Dice Monsters, a game that is totally different from Duel Monsters and is definitely not that game with dice added. He is incredibly sexy and handsome, to the point no one, man or woman, can resist his charms. He has his own theme music, "Sexy Back," which plays constantly as he speaks, but he may or may not notice it. 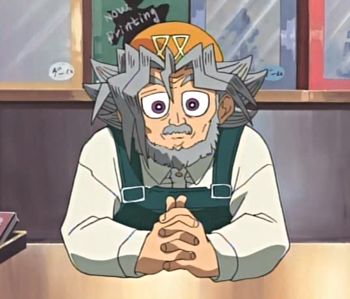 "Oh Black Luster Soldier, no one must ever know of our forbidden love."

Yugi's grandfather. A simple shopkeeper and stereotypical, senile grandpa with a death wish and some incredibly quirky... habits. Best not to pry into it: you will come back mentally scarred.

Mai Valentine and Her Breasts 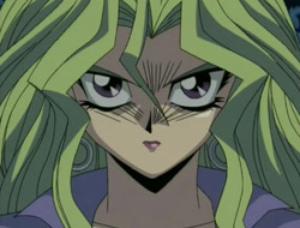 "My breasts are not fake!"

Voiced by BoobsMcbalrog note Caitlyn Elizabeth as of Season 4.

A (supposedly) world-class professional duelist, Mai repeatedly proves herself completely incompetent every time she duels. She also happens to have enormous breasts, which are objects of pride for her and obsession and mockery for everyone else. In Season 4, she suddenly gets a change of voice and a rather expanded characterisation. 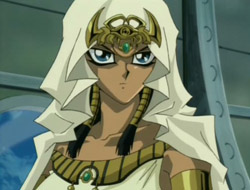 Marik's sister and holder of the Millennium Necklace, who helps the heroes foil his plans. She knows that there is a darker plot brewing, however, and her actions are to avert a terrible disaster she senses in the future; the cancellation of the series.

"I'm scared they'll write me out of the show. I mean, what purpose does my character even serve at this point?"

Joey's little sister who went blind because Joey spent the prize money meant to pay for a critical eye operation on trading cards. However, she later got better and joined the main cast, though she feared she was superfluous and risked being written out.