Oh wait that paranoid mermaid is in this one? Huh. Okay.

this is a dream come true

Tropes that apply to me (I won't reveal anything personal) 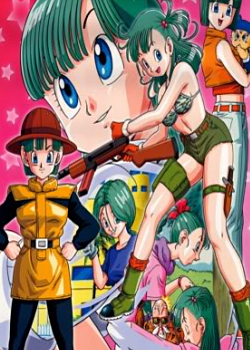 The very first human Goku came across (apart from his grandpa) at the start of the series. One could say she's the trigger that kicks off the series as a whole. Originally on a quest to gather the Dragon Balls for her own reason (to wish for a perfect boyfriend), Bulma gets dragged into the craziness that comes along with the search. Even when the quest is finished, she still keeps close ties with Goku and his friends and helps out whenever possible. Which, considering she's a mechanical whiz, is quite often.

Darth Manchild
When the sun collapses into the depths of outer space, and you see a familiar smirk on the moons face, know that I am laughing at you all. I am your nightmares, put into a blender with the darker parts of lovecraft, some crushed ice, and a hint of cinnamon.Know that when you see eyes in the darkness, and the silly string begins to cocoon you, don't fear. I still need you alive to buy my seasonal waterfront property. Come on, I having trouble trying to sell it! So what if it is where the Usher house collapsed! they were a bunch of weirdos anyway, a brother and a sister that seemed a bit too close. Pale too, like vampires, or the fanbase of Second Life. I mean, people, get some sun!Even us eldritch abominations get out from our depths too!Now what was I saying? I will take your mind and replace it with pink elephants dancing to the hamster dance at half speed! You will beg for me to end the world!Too bad I can't. Powers stripped when I got fired. Who knew Chuthie loved that damned beagle so much? I mean it was kinda awkward that it couldn't breathe at the depths of his apartment. I just went to the Mi-go to get it some gills. It wasn't my fault they took out its' brain, put it in a jar, and ate the body with some navy beans and chianti?

Fuck it we're going to the far future, this is 1.something.

Beware of spoilers all spoilers unmarked or actually not; in reality the most I'll do is the fucking Hydra boss or something. Or impliment "WHY GOD WHY" mode. (I suck at Expert too so I need to git gud to know what will actually be "reasonably" hard and what's just fucking impossible.) And even that's iffy because I have no idea how to even start modding Terraria.

He still mainly sells dye and dye-related tools, except with dye playing a major role in the Final Boss of the mod, he has a bit more of a purpose.

A "Creation Spirit" that is part of a species that appears during a Post-Plantera Solar Eclipse. She can be found at night in the dark on the surface, passed out, after surviving

The Pre-Hardmode "Biome Bosses" in general

Queen Bee is "retroactively" made out to be one of a hextet of bosses themed around the "natural" biomes in-between the two Oceans; lore later reveals that all six of those bosses are reincarnations, so to speak, of various "lesser monsters" that once attacked the land alongside Cthulhu, and each had a Nature Warrior race fight back against them.

THE HYDRA OF DEATH

The first and by far weakest boss in the entire mod. A massive, fifteen-headed, fire-breathing hydra monster that can show up at random if not killed yet or specifically be summoned with a Fifteen Scale

A scorpion boss found in the Underground Desert, whether by

Queen Bee's Swamp counterpart, a giant mosquito that can be found in Moquito Pools in the Underground Swamp by smashing the eggs, or by using a Juicy Blood Bag anywhere in the Swamp biome.

A massive humanoid ghost that dwells in the Dungeon, summoned through a Spirit Altar crafted with the Essense of Arid, Tropics, and Freezing, which respectively come from enemies in the Underground Desert/Badlands, Jungle/Swamp, and Snow/Barrens. May or may not be the ghost of the Mechanic's mother.

The Hallowed counterpart to the Eater of Worlds, and intended to be one of the two first bosses in Deep Water's Hardmode, depending on which good biome Hardmode infected the world with.

The Candyland's counterpart to the Brain of Cthulhu,

A boss meant to be fought after Golem and before Duke Fishron,

A trio of weird... muscular... onion/carrot things summoned by using a Suspicious Looking Onion in a Forest in the day. They are intended to be the first Hardermode bosses; defeating them for the first time will make Flameite spawn in the Underworld, Lightningite spawn on Floating Islands, and Tideite spawn in the Underground Ocean (in 1.3; prior, it spawns on the left and right edges of the world, above Underworld depths but below Floating Island levels). Uniquely, unlike the Twins, they each have one different drop depending on which one is killed last, although all three of them share a large drop pool.

The Agents (Jubilee and Ruby)

Jubilee, Agent of Light and Candy

Ruby, Agent of Dark and Meat

As of 1.5, the only non-Superboss that was added to Hardermode post-launch. Singularity is a black hole-like entity that is apparently the remains of the various "Anti-Nature Monsters," previously only able to send "partial entities" (such as Queen Bee, Sealed Mammoth, etc) to the world, that tried to band together and leech the energy from the world that Cthulhu had previously been hogging. With Cthulhu (read: the Moon Lord) dead, they were able to get just a little more power in them, and combine various eldritch home dimensions together.

Unlike the main four Hardermode bosses after the 1.1 revamp, Singularity can technically be fought at any point in Hardermode once the Otherland has spread enough, but is recommended to be fought in-between the Agents and True King Slime.

The actual leader of the Slimes. Looks just like King Slime, but vermillion and with angry eyebrows. Can only be summoned in the forest with a True Slime Crown.

Either the intended final boss or, if True King Slime is considered the "final boss," the hardest Bonus Boss of Normal worlds.

A Bonus Boss fought at the end of the Boss Rush on Expert and harder worlds (on Normal worlds, the Boss Rush ends with the Dye Goddess; he's fought after her). He can be considered the hardest boss of Expert and Master worlds, but not Normal worlds (where he cannot be fought) or Savage/WHY GOD WHY worlds (where the Dryad/Heptinity instead takes the mantle, but he can still be fought there). Can basically be described as a giant, sapient sword-being [...] He can be manually summoned by himself after beating Boss Rush by using an Antisage Medallion anywhere at any time.

The Heptinity [may be more than seven; hell if I know]

A boss exclusive to the Savage and WHY GOD WHY Modes, accessable after giving thirty platinum coins to the Dryad after the Dye Goddess has been killed and the world has been completely purified. Using the Nature Ticket she sells in a completely pure world will cause her to get a massive boost in power, and later on the other six Nature Maidens join her and fuse up to become the Heptinity.

An alternate Hallow introduced in 1.2, themed around candy and based on one of the scrapped alternate biomes. (Along with the Swamp.)note The Underworld's alternate "Hell" biome, on the other hand, is not directly in the game, although Blue Underworld comes close

Added in 1.2, one of the Oceans — independant of the Dungeon/Jungle sides, it's a side chosen randomly, but certain other modded biomes are dependant on it — will look normal at first, but just barely diving beneath the surface will reveal that it is overgrown with kelp and coral, resembling an underwater forest of sorts. Rather confusingly, this also has an "underground" of sorts, but it's much smaller than the Underground Ocean, and is more of a flooded Underground Jungle thematically, rather than the rockier, darker Underground Ocean.

The Ocean opposite to the one with the Underground Ocean will have a large pit leading down in to an underground biome for the ocean itself. Because the biome is mainly defined by proximity, it is technically possible to reach it by going through caves close enough to that world's edge, or going high enough in the Underworld. The biome is almost always rather thin horizontally, but makes up for it by being very deep,

This was introduced in 1.3, along with the Blue Underworld.

The side of the Underworld that's horizontally the same as the one with the Kelp Forest will have its Underworld contain a set of bizarre ruins with lakes of blue magma that deals extra damage. It's described by Word of God as a mix between Lower Norfair of Super Metroid and certain lava stages in Super Mario 3D World.

A mysterious Hardermode biome added in 1.5. After killing the Moon Lord for the first time, in addition to two horizontal lines of whichever evil or good biome did not spawn appearing at random Underground-Cavern heights, a one-tile wide vertical line will appear at some point in-between the spawn and the Dungeon, spreading outward similar to the Corruption/Crimson/Hallow/Candyland. Unlike any of the four good or evil biomes, the Clentaminator has no effect on it without the Seal Solution that's obtained from killing Singularity. It will then spread itself, and thanks to the "straight vertical line" spawning system, the way it spreads by default resembles something getting torn open down the middle. The biome itself has a black theme, and its background — even in the Underground — has a surreal, space-like look to it.

Six (maybe seven) mysterious people who have some connection to various "elements:" Forest, Fire, Water, Spirit, Shadow, and Light. They are mainly revealed through their respective Swords, which are among the best of any melee weapons in the game, and all six of those Swords can be crafted with the Goddess Tears to make the Sword of Sages, the mod's Infinity +1 Sword. More on them is revealed in Expert and higher worlds by the Sage Slayer, as they were all mighty warriors who protected Terraria, but they were all killed by the Slayer.

The person responsible for the Dye Goddess' rise to power.

Vanilla Changes
Savage and WHY GOD WHY

Blah blah blah. The Forbidden Fruit, if consumed in a Master world (this is assuming that the mod's gonna be done after 1.4 because... come on. 1.4's like probably due in like a few months at this point, I don't have a damn thing on this except ideas) before a boss is killed, will permanently make that world in to Savage Mode.

The Foresaker is something that can be made with Ebonwood/Shadewood at a Demon/Crimson Altar, and when used in a Savage world, it toggles WHY GOD WHY Mode, Unlike Savage Mode, which is supposed to be a genuine difficulty mode, WHY GOD WHY is nothing but pure, horrible, pain. It's a joke mode not meant to be taken seriously, which also breaks the sequence of the game completely. (For example, the mode practically forces players to fight the Wall of Flesh as the second boss.) Bosses and some enemies drop far more powerful and better gear than they would normally, to help encourage the sequence breaking. Unlike Savage mode, which is a permanent conversion, WHY GOD WHY can be toggled on and off.

Savage (this will ignore whatever changes are in Master mode; if Master Mode actually does some of this shit, then I'll one-up it)

Sheet of something that actually exists: