This page has been launched, you can find it here

is a Virtual YouTuber group founded by Cover Corporation. Although marketed as a team of idols, the group is also known for its Let's Play livestreams and hand-animated 3D shorts on its main channel. The group initially only encompassed musical talent from Cover Corp.'s Inonaka Music label — namely, one Tokino Sora

— but eventually grew to two dozen idols and counting, not including their international talent.

Not fair, where's MY name?! -An angry Rachel

It's actually the names used in cryptography, my past self. 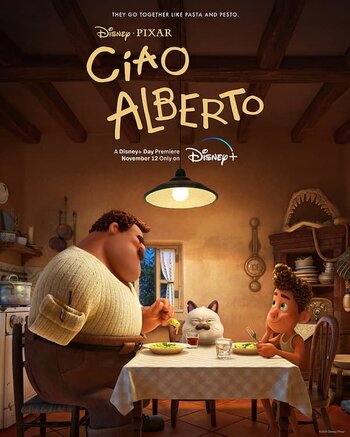 Ciao Alberto is a 2021 animated Short Film follow-up to Luca, directed by McKenna Harris. It premiered as part of Disney+ Day 2021 to celebrate the two-year anniversary of the Creator/Disney+ streaming service.

Set after the events of the movie, the short follows the adventures of Alberto as he settles into his new life in Portorosso and attempts to strengthen his bonding with Massismo.