This page is used for the Final Girl clean-up project

. Please do not cutlist. 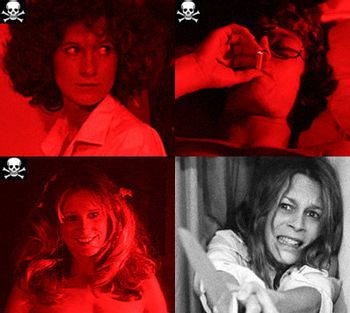 "All suffer and die at the hands of whatever horror they have raised leaving the last one, to live or die: The virgin."
Benny: But I still want to know what happens!
Buffy: Everyone gets horribly killed except the blonde girl in the nightie who finally kills the monster with a machete but it's not really dead.
Jennifer: Oh my God. Is that true?
Buffy: Probably. What movie is this?
— Cut dialogue from Buffy the Vampire Slayer
Advertisement:

The simplest definition of this is "the last character left alive to confront the killer" in a Slasher Movie. The character in question tends to follow a certain set of characteristics. The most obvious one is being (almost) Always Female. Especially in older works, she'll also almost certainly be a virgin, remain fully clothed, avoid Death by Sex, and probably won't drink alcohol, smoke tobacco, or take drugs, either. Finally, she'll probably turn out to be more intelligent and resourceful than the other victims, occasionally even evolving into a type of Action Girl by the movie's end. Looking at the Sorting Algorithm of Mortality, you could say that the Final Girl is a combination of The Hero, The Cutie, and the Damsel in Distress - which obviously gives her a very low deadness score. The Final Girl is usually but not always brunette, often in contrast to a promiscuous blonde who traditionally gets killed off.

It's also interesting to note how the Final Girl can be interpreted in film theory. On one hand, the character seems to be the living embodiment of stereotypical conservative attitudes of what women "should be". (Although these same conservative qualities may have also made her warier and better at keeping a cool head than her more reckless or impulsive peers). On the other, feminists have noticed that through this device, the males in the audience are forced to identify with a woman in the climax of the movie. In practical terms, the makers of a horror film want the victim to experience abject terror in the climax, and feel that viewers would reject a film that showed a man experiencing such abject terror.

The term was coined by Carol J. Clover in her 1992 book Men, Women, And Chain Saws: Gender In The Modern Horror Film, a critical examination of slasher movies.

The character is ultimately the last one left to tell the story. If the Final Girl appears in a sequel to the movie she survived, there is a very high chance that she will fall victim to Sudden Sequel Death Syndrome.

This trope has seen a growing number of subversions, aversions, and parodies in recent years, which suggests it may be slowly weakening. Then again, the Action Survivor's replacing the Action Hero points in an interesting direction.

Often overlaps with Token Wholesome. Compare and contrast Kill the Cutie and Men Are the Expendable Gender. Has nothing to do with Last Girl Wins, which is about romantic pairings.