Silver Fox
aka: Grandma What Massive Hotness You Have 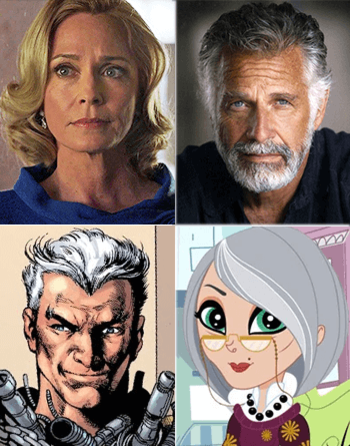 Steely gaze, steely hair, stealing hearts.
L - R, top to bottom: Moira Queen, The Most Interesting Man in the World, Magneto, and Mrs. Anna Twombly
"I'm pregnant, McGee. Twins. Haven't told the father yet. It's Gibbs. I know it's wrong, but something about his silver hair gets me all tingly inside."
— Abby Sciuto, NCIS
Advertisement:

A Silver Fox is an attractive, distinguished older (generally over 50) person, often noted for their sexy silver or white hair along with their good looks and charm. Note that this trope is only applicable to characters that look visibly old — immortal or ageless characters and characters who are Older Than They Look and resemble young people despite their age don't count. Characters who live much longer than normal humans but are nonetheless past middle age by their species' standard do count, so long as they're both visibly old and attractive by human standards.