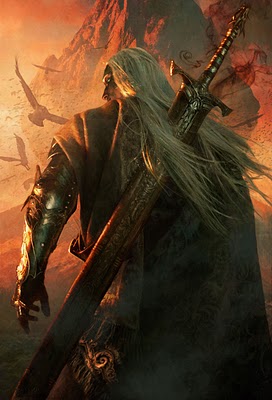 Anomander Rake, from the Gardens of the Moon collectors edition.
"Now these ashes have grown cold, we open the old book. These oil-stained pages recount the tales of the Fallen, a frayed empire, words without warmth. The hearth has ebbed, its gleam and life's sparks are but memories against dimming eyes - what cast my mind, what hue my thoughts as I open the Book of the Fallen and breathe deep the scent of history? Listen, then, to these words carried on that breath. These tales are the tales of us all, again yet again. We are history relived and that is all, without end that is all."
Advertisement:

The Malazan Book of the Fallen is an epic fantasy series by Canadian author Steven Erikson. The series is famous for its Doorstopper tendencies, for having multiple characters (the Dramatis Personae usually contains several hundred characters, and even then does not include numerous incidental ones), its deliberate use of Lost in Medias Res and for introducing an anthropological and geological perspective to the Fantasy genre. The series' main influence is The Black Company by Glen Cook.

The Malazan Empire is yet in its infancy, but it has already seen its first betrayal. Surly, Master of the Claw, has assassinated Emperor Kellanved and his closest companion, Dancer, and taken the throne under the name Laseen, continuing the Empire's policy of ruthless expansionism, though she is continually mistrusted. Almost immediately, the new gods of the Shadow Realm, Shadowthrone and Cotillion, launch a plot against her, but stumble into a web of far grander plans among their fellow Ascendants. So begin the Tales of the Malazan Book of the Fallen, a grand tragedy told from the perspectives of dozens if not hundreds of characters across three arcs, each beginning on a distinct continent.

On Genabackis, the decade-long Malazan campaign of conquest is slowly coming to a bloody end, but Laseen's paranoia of plots against her leads her to orchestrate the decimation of the Bridgeburners, the most famous military unit in the Empire, sending the armies to the brink of revolt. On the other end of the Empire, the Seven Cities subcontinent is gathering for a religiously mandated uprising known as the Whirlwind, and as the war unfolds, it becomes clear that the inexperienced noblewoman Laseen has inexplicably chosen to put down the rebellion is much more than she seemed at first sight, with unknown motivations and an unknown agenda she will stop at nothing to realize. Meanwhile, far away, on the continent of Lether, the six tribes of the Tiste Edur have united after millenia of internal warfare to protect themselves against the Kingdom of Lether, driven to inappeasable expansion by its radical capitalist economic system.

As events progress, these conflicts start interweaving, and throughout it all, rumours of peoples thought extinct or myth returning can be heard, as a broken god driven mad by millenia of torture launches his plan to break free from his chains and deliver vengeance.

The universe in which the story takes place is a shared creation of Steven Erikson and Ian Cameron Esslemont, with the Malazan Book of the Fallen considered to be the main sequence. The following books have been written in the setting:

Alternative Title(s): The Malazan Book Of The Fallen