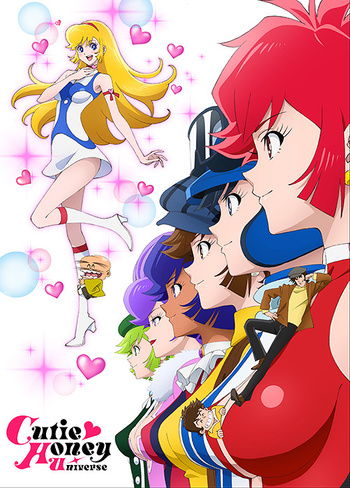 "Honey Flash!"
Right now you are Cutey Honey! You are a super android that has the power of humans, times seven!
—Doctor Takeshi Kisaragi
Advertisement:

Cutey Honey has one of the strangest target histories around. It was originally conceived as a simultaneous manga and anime medium of the Shōjo genre, focused on romance and lacking any nudity or excessive violence; in fact, Honey herself owed her transformations to a smart way to sell Barbie-inspired changing dolls merchandising. However, due to a timeslot change, the unproduced anime ended up slated to debut in a Shōnen hour show of all things, which led to Nagai and company to realize they had to change the tone to make it more appealing to a male audience. Thus, they added more action and much more nudity, especially but not limited to Honey's transformation sequences, and so the tone for Cutey Honey was set. The resultant anime ended up getting cancelled over its then-racy content, but ironically and to Nagai's surprise, it was just tame and pretty enough to attract an unexpected number of younger female fans as it had been once planned.