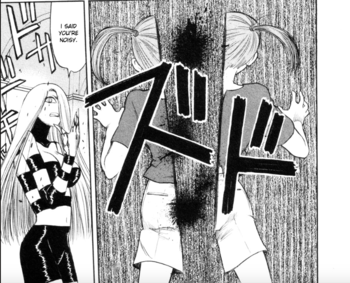 "I am Sister Jill's eyes and ears, Tarantula Claw! Lurking in the darkness, walking in the shadows, I capture words with these threads and deliver them to Sister Jill. That's my motto."
"Don't ever let Scorpion corner you. No mere human can ever defeat her. That bitch is just a bloodthirsty monster who gets off watching her soldiers kill prisoners. That's the real reason this prison was built. Not for any kind of justice."
— Akira Fudou, on Miss Scorpion, New Cutie Honey, "Prison is the Nest of Evil"
Advertisement:

Honey Kisaragi, as the prototype for future Magical Girl Warrior characters, has fought many foes through various incarnations. These are the worst.