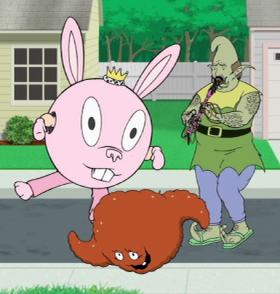 Commence the jigglin'!
"This guy has walked out of a venue and collapsed in the middle of a public bar. His best mate who's the only doctor in the building has been picked up and carried away by security. His girlfriend has stepped over his prone body to ask me for an autograph. And now Bart Simpson is telling him to come away from the light! THAT IS SURREAL!"
— Adam Hills on what is and is not surreal

Something that's so bizarre and inexplicable that it's funny. This is a strange version of Crossing the Line Twice: It takes talent (or luck) to make something so mind screwy and WTF-inducing that it makes you laugh.

Almost every comedy in history has used this at least a few times. It's usually mixed in with other Comedy Tropes, and an undercurrent of it can be felt throughout many shows. However, some take it above and beyond any sense of normalcy.

There are several genres dedicated to this trope. It's the main selling point of Gag Series, surreal comedy and Dada Comics, and a main feature of Post Modern comedy. This type of humor has exploded in all forms with the rise of the internet; many memes take this form.

This trope often overlaps with So Bad, It's Good, especially when a work falls into this by accident. It is also a very common source of What Do You Mean, It Wasn't Made on Drugs?. One way to create Surreal Humor is with Bathos.