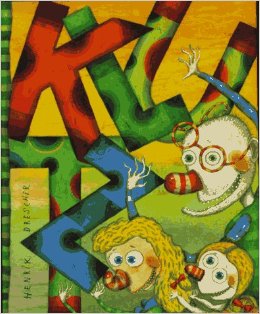 Klutz is a children’s book that was written and illustrated by Henrik Drescher in 1996.

The Klutz family has always been clumsy since the dawn of time (literally, their earliest ancestor was a caveman who was very clumsy). They would spend their days falling down the stairs and falling on their faces whenever they go out. The family’s clumsiness is caused by their large black boots that they never took off for any occasion. However, the Klutz family’s lives change when they crashed into a circus caravan being run by Professor Squirmworm and Professor Squirmworm was so impressed by their clumsiness that he hired them as circus performers!