"Only a select few suffer from constipation... And only those select few get to visit a world like this. It's a shame though, because one of them is going to have their world come to an end..."
- MJ, yes that MJ 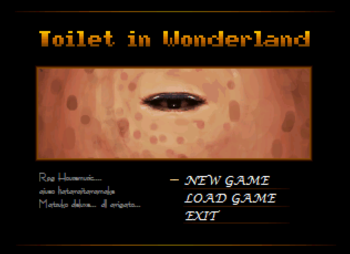 The laws of defecation means nothing.
When a young girl suffering from constipation, called Mira, attempts to go to the toilet, she mysteriously finds herself inside of a surreal world inhabited by strange beings. Alongside a walking muscular butt person, a nameless being, and a white rabbit she must find magical toilets and obtain laxatives in order to relieve herself from constipation.

The game was created for the annual VIP RPG Red-and-White 2010 festival by Team Nonsense. The game is heavily inspired by the book Alice's Adventures in Wonderland and other surreal RPG's like Yume Nikki, Ao Oni and Earthbound.

Toilet In Wonderland contains examples of: