Characters / Dissidia: Final Fantasy  Warriors of Chaos I to VI

A character sheet for the Warriors of Chaos from Dissidia Final Fantasy and its prequel. Note that comments on a character's fighting style generally stay the same between games, except when otherwise mentioned. 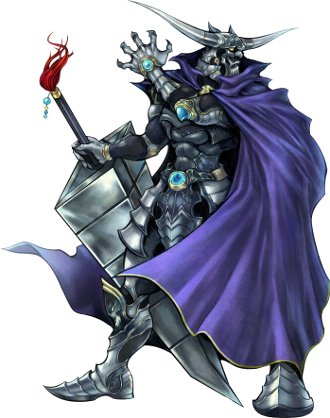 "We will never come to accept one another. We shall always be in conflict!"
"The eternal darkness will transcend time to face its rival once more." — Wheel of Darkness
Voiced by: Kenji Utsumi (Japanese), Christopher Sabat (English)

The villain from the original Final Fantasy. His Backstory states that he was once a famous hero, but he turned evil and abducted Princess Sarah and stole away with her to the Chaos Shrine. In the Dissidia universe, he's the longest serving warrior of the cycles and Chaos's right-hand man, and leader of his warriors. However, Garland knows more about the cycles of war than even Chaos realizes.

Garland's fighting title is Nemesis. He wields a massive segmented sword that can transform as he attacks; he can extend it to stab it like a lance, pull out the handle on a chain to swing it like a flail, bend it forwad to slam it into opponents like an axe, or detach a smaller blade from the side to perform dual-wielding combo attacks. His Bravery attacks change properties depending on if the player taps or holds the button when executing the second part of the attack, allowing tactical variance. His HP attacks are versatile at close and mid-ranges, and take cues from the Four Fiends of Final Fantasy. As would be expected with him wielding such a massive weapon, Garland moves and attacks slowly, but deals great damage when he connects. 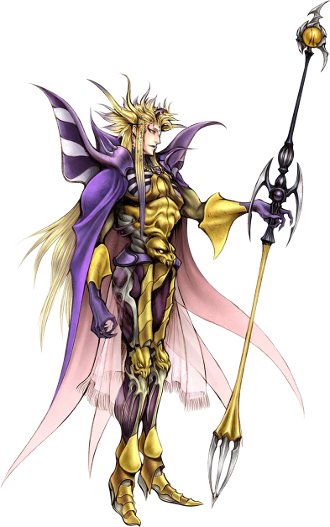 "You should have disposed of your fantasy and accepted me as master."
"Without conquering one's virtue and desires, thou shall fall into darkness." — Lust for Power
Voiced by: Kenyuu Horiuchi (Japanese), Christopher Corey Smith (English)

The ruler of the Palamecian Empire from Final Fantasy II. Though he was eventually killed by forces of the Wild Rose Rebellion, his soul took over hell itself and return to create Hell on Earth before being defeated again. In the Dissidia universe, he's as ambitious and ruthless as ever, desiring to subjugate all he sees and force friend and foe alike to bow to his authority — and those that resist will be crushed.

The Emperor is the Trope Namer for Trap Master. He only has a handful of attacks that attack directly; instead he relies on sending out explosives, mines, and crests of energy to create a field of hazards for opponents to avoid. Their effects including pulling opponents in and paralyzing them, exploding to deal massive damage, or shooting projectiles that bounce off of walls and ceilings. This makes the Emperor one of the standout Difficult, but Awesome characters in the game, as using him effectively requires continuously zoning and pressuring the opponent and taking advantage of their mistakes to brutally punish them once he's pinned them down where he wants them.

The Cloud Of Darkness 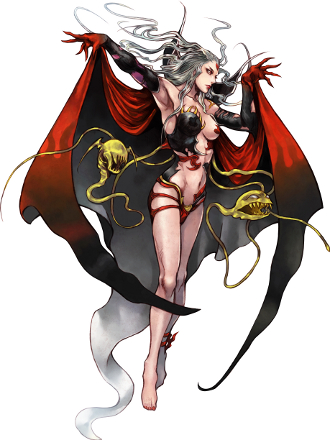 "A lone heart will not change the world... What awaits when you awake is always — nothing but despair."
"Light fells the darkness, while darkness swallows the light; all return to nothing." — Roaming Clouds
Voiced by: Masako Ikeda (Japanese), Laura Bailey (English)

An Eldritch Abomination originating from Final Fantasy III, she is a being born of the Void Between the Worlds. More a force of nature than an actual person, she believes it is the fate of all things to be flooded in darkness and consumed by the Void. Despite appearing as a woman, it has No Biological Sex: other characters refer to the Cloud of Darkness variably as "she" or "it", while the Cloud of Darkness uses the pronoun "we", as according to supplementary materials, the two tentacles accompanying her have minds of their own, and the Cloud of Darkness speaks for them as well as herself.

The Cloud of Darkness is the Bane of Life. She specializes in a wide variety of HP attacks themed on her signature attack "Particle Beam", which let her fires out waves, beams, and orbs of dark energy in different tactical configurations, such as a barrage of energy orbs from multiple directions or a field of high-reaching beams shooting up around her. Her Bravery attacks are limited, but can change up their effects between three possibilities by delaying when the button is pressed, giving her a larger Bravery movepool than is first apparent. This fighting style means that the Cloud of Darkness excels at rapidly draining the opponent's HP, but struggles on the Bravery game due to constantly being recovering from HP attacks, and her Bravery attacks don't deal much damage and are more supportive in nature. 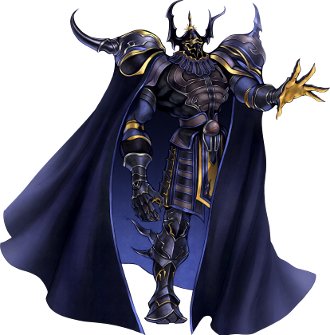 "You're naive, Cecil. Even knowing betrayal and despair, you would depend on the whims of others?"
"Accept hatred and regret as you proceed forth. All paths lead to the future." — Lone Heart
Voiced by: Takeshi Kaga (Japanese), Peter Beckman (English)

A major antagonist from Final Fantasy IV, Golbez in that title was presented as the Big Bad who was seeking the Crystals to attain ultimate power, until it was revealed that he was Cecil's brother and was actually being controlled by the true villain, the sorcerer Zemus. Despite that, in Dissidia, Golbez is on the side of Chaos, something that puzzles Cecil as he tries to feel out if he can trust his brother or not and why he would serve Chaos. But, even if he's acting on his own will this time instead of being controlled, there is still much more to Golbez than is first apparent.

Golbez is a Thaumaturge. He utilizes two-part spells where their second effect changes depending on his distance from the opponent. He summons Attack Drones and energy blasts with waves of his hand, and the hand motions he uses to do this are themselves part of the attack, so he can hit at both close and long ranges. This, coupled with multiple HP links, gives Golbez a lot of combo potential and makes him difficult to approach without getting smacked away and zapped for your foolishness. However, unusually for a mage, he struggles at the long-range game, since most of his ranged options are slow and don't possess that much range. 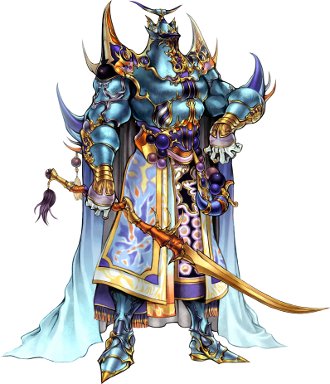 "Embrace the stillness of eternity."
"The true Void lies nowhere. Only the power of life exists." — Power of the Void
Voiced by: Tarō Ishida (Japanese), Gerald C. Rivers (English)

The warlock from Final Fantasy V, born from a tree that was used to seal away myriad demons, until it became sentient. Exdeath seeks the Power of the Void to claim absolute power and destroy both worlds, but when he was consumed by the very power he tried to control, he transformed into Neo Exdeath, an Eldritch Abomination, before the Warriors of Light defeated him. In Dissidia he cares little about the conflict of the gods, as all is destined to be destroyed by him eventually anyway. Instead he does as he likes, and if something catches his interest or seems to be an amusing diversion for him, then he gets involved.

Exdeath is an Entropic Adversary, and is a Barrier Warrior. His offensive attacks are slow to start up, often easy to avoid, and do little damage, but Exdeath is not intended to be the aggressor: he has various Block moves that can deflect attacks, and when he does he can unleash counter-attacks that hit very quickly and deal heavy damage. With mastery of his blocking techniques, Exdeath can be almost untouchable and will brutally punish opponents careless enough to attack into his shields and trigger his counters. However, this fighting style naturally means he has trouble being aggressive and is reliant on his blocks to fight properly. 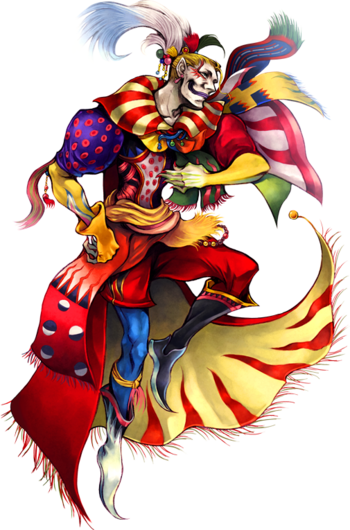 "Hopes aren't worth dirt! I'm going to destroy everything!"
"The past is filled with pain and suffering, but all is well if you have fun living." — Fanatic's Leer
Voiced by: Shigeru Chiba (Japanese), Dave Wittenberg (English)

The insane harlequin from Final Fantasy VI. After he became an experimental Magitek Knight, Kefka gained great power and great insanity. Finding no greater joy than in destruction, he eventually claimed the power of the Warring Triad and became a Physical God that destroyed the world. In Dissidia he's the same way, following his impulsive desires to cause misery and death wherever, however he can. He's particularly keen on manipulating Terra and taking control of her mind to use her as a minion, but also pulls strings with his fellow warriors of Chaos when he decides he dislikes their conduct.

Kefka is a Mad Mage, as true a description as any you could ask for. His spells have crazy twists, like Fire spells that zigzag through the air, Blizzard spells that bounce around, Thunder spells that surround the opponent, and so forth. Kefka is a long-range fighter who relies on projectile-type attacks like this, which makes him a bit easy to block and dodge once you know the twists to his attacks. However, when he lands a hit he packs a wallop, and he has various tricks up his sleeve to trip opponents up and hit them where they didn't see it coming.