Characters / Dissidia: Final Fantasy  Warriors of Cosmos I to VI

A character sheet for the Warriors of Cosmos from Dissidia Final Fantasy and its prequel. Note that comments on a character's fighting style generally stay the same between games, except when otherwise mentioned. 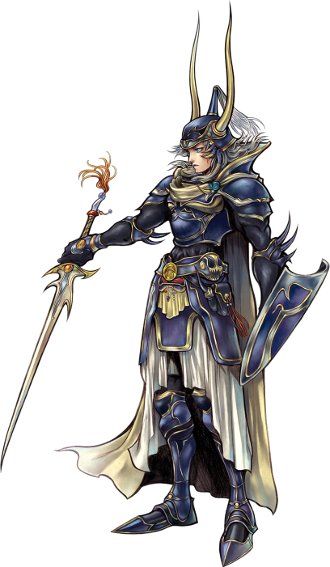 "Though I once fought in the name of light, that honor may now be lost to me. However... The light I hold within my breast, never once has it flickered or faded. This I swear: I shall do my utmost to protect you until the very end."
"The nameless warrior shall transcend time & space, bringing light to the world." — Guiding Light.
Voiced by: Toshihiko Seki (Japanese), Grant George (English)
—Fighting Style: Paragon

The Warrior from the original Final Fantasy, a nameless swordsman with no memories who wandered into the Kingdom of Cornelia with a crystal in his hand, he saved the Princess Sarah and slew the rogue knight Garland before embarking on a journey through time and space to save the world.

The Warrior of Light is the Paragon. He is a Jack-of-All-Stats fighter, with various mid-range and close-range Bravery attacks, many of which can link to HP attacks, and he is adept at fighting both on the ground and in the air. His major failing is his lack of ranged options, limited to a few weak and slow magical projectiles, and overall being a Master of None.

The character is a noble and formal knight who's extremely loyal to Cosmos, determined to fulfill the task she has given to him and the other warriors.

In Dissidia 012, he is suspected as a traitor by Lightning. While less confident in demeanor and more unsure of himself than in the original, the Warrior of Light retains his fierce resolve to dutifully serve Cosmos.

He also appears in Prologus as the "Leader by default", as agreed between Lightning, Jecht, and Kain. As such, he acts firm and strict towards Lightning. 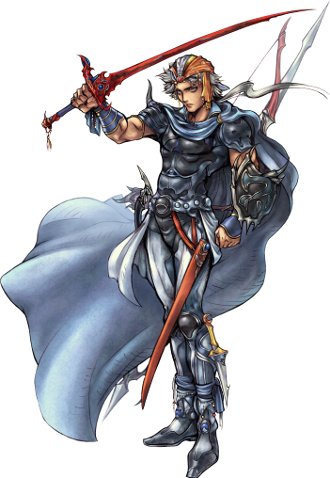 "Believe in the future — And persist in the present. That's what I'll do!"
"The unwavering will of the youth will realize his dream. Eventually..." — The Youth's Dream.
Voiced by: Hikaru Midorikawa (Japanese), Johnny Yong Bosch (English)

The hero from Final Fantasy II. When he and his family lost their home and parents to the Palamecian Empire they joined the Rebel Army under Princess Hilda and became the spear point in liberating the world from the tyrannical Palamecian Emperor and his horde of monsters.

Firion is a Weapons Specialist. With an arsenal of weapons he can attack across a variety of ranges, and in Dissidia 012 can change up the second part of his combos for varying strategic options. In the air he cast spells, and in Dissidia 012 can chaincast them three times. All of this makes Firion an Anti-Air fighter, who excels at keeping the opponent grounded; fortunate for him, as his aerial moveset is very poor.

Firion uses eight types of weapons (if you include shields and bare-handed fighting), one for each fighting style in Final Fantasy II and each representing a party member. 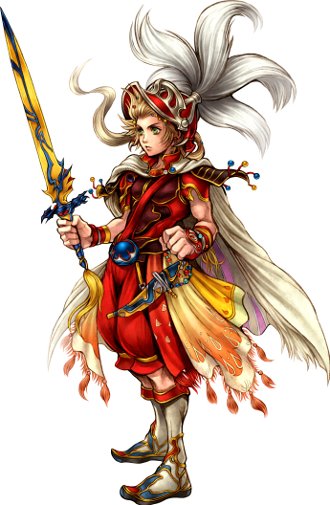 "Not even you can destroy this. What I've found is strength — Strength to protect everyone!"
"Look at yourself and discover your faults. That is true strength." — Onion.
Voiced by: Jun Fukuyama (Japanese), Aaron Spann (English)

The first player from the original version of Final Fantasy III. A young boy from the village of Ur, he chanced upon the Wind Crystal when playing in a chasm and was tasked with returning light to the world and saving it from the Flood of Darkness caused by the magus Xande.

The Onion Knight is a Mystic Fencer, the perfect image of the Magic Knight who wields a moveset evenly split between physical and magical attacks. This gives him a move for any circumstance, close-range or long-range, Bravery or HP. His major failing is his limited movepool that makes him very predictable and easy to punish if he is dodged or blocked. 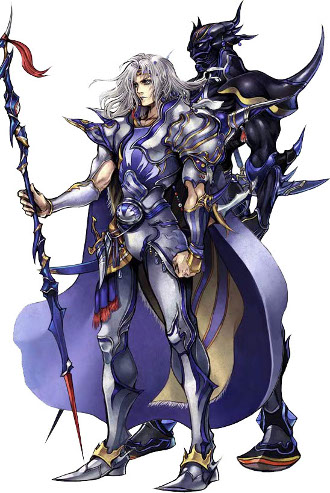 "It's because I have friends that I can fight! Both light and darkness give me the guidance I need. Thus — I can turn darkness — into hallowed light!"
"All possess good and evil in their hearts. Gain true power after overcoming darkness." — Twin Form.
Voiced by: Shizuma Hodoshima (Japanese), Yuri Lowenthal (English)

The Hero of Final Fantasy IV. A Dark Knight and ward to Baron's king, he led a bloody mission to steal the crystals and upon his protest was stripped of his rank and cast aside. Shedding his black armor and baptized in the holy light of Mt. Ordeals, he became a Paladin and took up arms against his former liege and the dark forces that pulled the strings from the shadows.

In battle Cecil is a Split Soul. He shifts between his Dark Knight and Paladin forms using HP attacks or specific Bravery attacks. As a Dark Knight he wields slow but powerful sword blows on the ground, and can keep his opponent grounded with his air attacks, while as a Paladin he excels in swift aerial combos and has a ground attack pool that takes the fight back to the air. Using Cecil to his fullest potential requires mastery of both his forms and shifting between them to suit the flow of battle as needed.

Teaming up with Cloud, Tidus, and Firion, the four of them set off to find their crystals. However, he encounters his own brother, Golbez, as a Warrior of Cosmos. Golbez promises to tell him the secret of the crystal if he follows him, leaving Cecil to decide whenever to stick with his friends or face his brother alone.

Like many others of the original cast, Cecil's role in 012's story is much smaller. He appears pretty much only in a Flashback alongside Kain and Golbez, as well as in the Reports.
Bartz Klauser 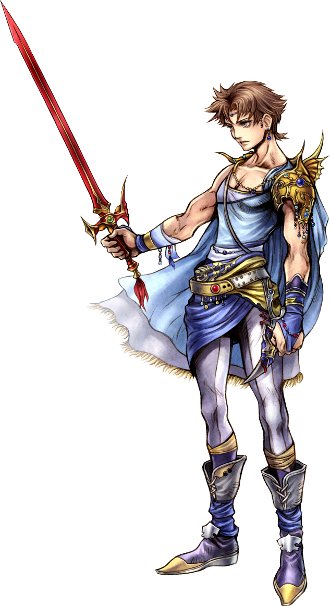 "No horsing around, though. This isn't the time for games. It's time for some serious fun."
"The pairing of worlds hides that power, and endless possibilities." — Splendor of the Wind.
Voiced by: Soichiro Hoshi (Japanese), Jason Spisak (English)

The protagonist of Final Fantasy V. A wanderer who traveled the world astride his chocobo companion. After helping Princess Lenna and her companions to the Wind Shrine, he was chosen by the Wind Crystal to save the other crystals from shattering and releasing the monster Exdeath; who sought to unite two world as one so that he could wield the dark power of the void sealed between them.

Bartz's fighting style is that of a Mimic. He copies and combines the attacks of the other playable heroes, resulting in unique combos where he swiftly switches weapons mid-attack. Bartz's attacks also all have minor support abilities attached to them, giving him an extra degree of customization. Bartz is overall a close-to-midranged melee fighter, though he does have a few weaker ranged options.

Bartz teams up with Zidane and they race together in order to find their crystals. Their reckless attitudes, however, prove problematic once they fall into traps meant for another. How far will they be willing to go to save one another?

Bartz's role in the main story of Dissidia 012 is minimal, being one of the first Warriors of Cosmos getting put to sleep by Kain, and subsequently disappearing from any other scenes. He does, however, remain relevant for any side-scene involving his Unknown Rival, Gilgamesh.
Advertisement:
Terra Branford 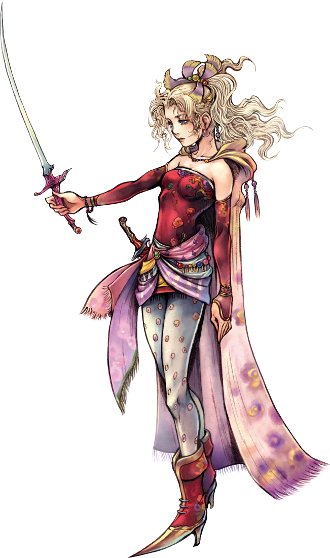 "I've found a future that I want to protect. No matter how strong my powers become, I will never lose sight of my dream!"
"Even those who are not human are human if they possess the ability to love others." — Veiled Magic.
Voiced by: Yukari Fukui (Japanese), Natalie Lander (English)

A hero from Final Fantasy VI. A mysterious girl with the blood of Espers that was enslaved for her magical powers to serve as a Magitek Knight, on a mission to capture an esper she was freed from Imperial control and rescued by a rogue named Locke who she joined in a group called the Returners; rebels that opposed the expanding grasp of the magic hungry Gehstalian Empire.

Terra is an Esperkin and a font of magical power. Wielding an arsenal of magical attacks, she is most comfortable fighting while keeping her distance from the opponent, but has some close-ranged spells to keep from being helpless when they close in. While her damage output is high, her preference for long-ranged projectile attacks that are easy to dodge or block makes it difficult to reliably land hits.

Probably as a reference to her guarding orphans in her original game, Terra is teamed up with the youngest member of her team, Onion Knight. She follows him around keeping a serene, controlled, and cautious attitude to keep his Hot-Blooded impulses in check. When she's kidnapped, Onion Knight sets out to save her. When he's kidnapped, Terra teams up with Cloud to settle the debt.

Playing off her early role in her source game, Terra starts off in Dissidia 012 as a Warrior of Chaos, brainwashed by Kefka into becoming a mindless fighting machine; that is, until, in an odd moment of sympathy, Kuja hijacks the spell, allowing Terra to eventually regain her own free will. Before Kefka can re-manipulate her, Vaan comes to her aid, even if she's technically his enemy. He motivates her to fight not for the war, but for what she wishes, opening her eyes to new possibilities.