The character's sheet for characters who are not Warriors of Cosmos or Warriors of Chaos in Dissidia Final Fantasy and its prequel. 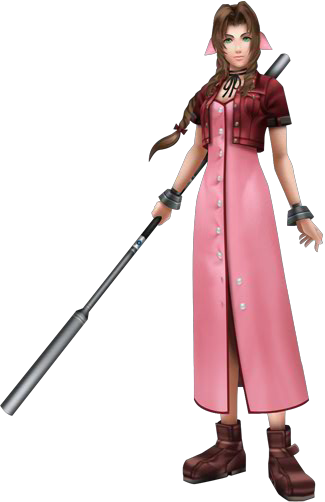 "Please...lend us your strength!"
"Hey, do you want a flower? They're only a gil. Just kidding... I'll explain the game now." — Prologus introduction
Voiced By: Maaya Sakamoto (Japanese), Andrea Bowen (English)

The late heroine of Final Fantasy VII appears as an assist character exclusively bought in the Dissidia 012 Prologus demo. 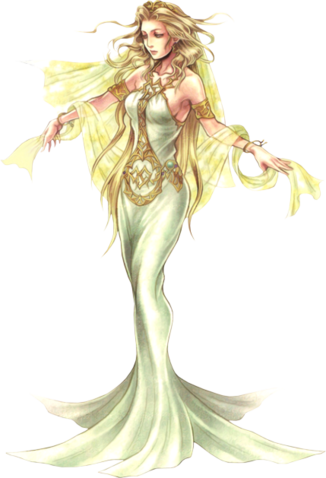 "No... It has already been settled. Your fate is to fall... into true darkness."
"It is all an endless dream. Yet still... the fantasy must come to an end..."
Voiced by: Sumi Shimamoto (Japanese), Veronica Taylor (English)

Cosmos is the goddess of harmony that opposes Chaos in Dissidia: Final Fantasy. She once failed to gain the cooperation of the Crystals, ultimately losing her battle against Chaos, but not the war, before the game's events.

In the Dissidia 012 secret ending, it's revealed that after Cid was freed from his imprisonment in Scenario 000, he and Cosmos were revived. Cosmos refuses Cid's offer to join him and remains behind as the god of the world. This makes her the most likely of all the characters in the Dissidia games to have definitely not survived the events of the games, as the world she stays behind in is due to fade from existence, according to Cid. In Dissidia Final Fantasy (2015), the Warrior of Light states that her will was inherited by the goddess Materia. 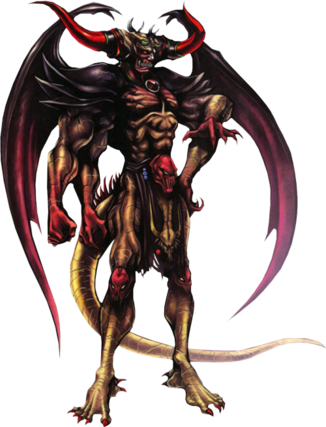 "For all your wandering, still you end up in purgatory. What a shame, Cosmos."
"At the end of the dream... even chaos tears itself apart!"
Voiced by: Norio Wakamoto (Japanese), Keith David (English)

The god of Discord and Big Bad of Final Fantasy and, if this game is any indication, the whole series, born from the hatred and time traveling escapades of Garland, as well as the power of the four Fiends. He seeks to defeat Cosmos through the cycles of battle and become ruler of the world, relying on a plan set in place by the Emperor and Garland.

In Dissidia 012, his backstory is revealed in full. 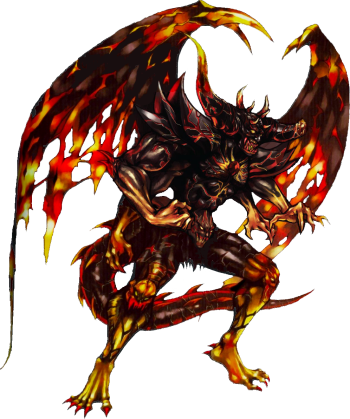 —Fighting Style: The Omega And The Alpha

Unlike the original Chaos, Feral Chaos is a playable character, unlocked by beating him in Confessions of the Creator. 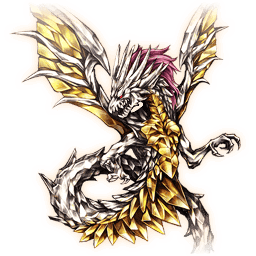 The ancient dragon that dwells in the Dimensional Rift. Like Cid of The Lufaine, Shinryu also has a role of much greater importance in this game.

In Dissidia 012's playable epilogue Scenario 000, Shinryu reacts badly to Cid breaking his perfect system and helping the Warriors get home, and punishes Cid by trapping him in a nightmare realm where Chaos survived the 13th cycle. It... didn't quite work out the way Shinryu planned.

Creatures drawn from the Rift that take the form of the warriors chosen by the conflict. In the 12th cycle, the warriors of Chaos freed them from the Rift and bound them to their will to fight for them. The Manikins serve as the Mooks of the series.

A character mentioned only in the Cosmos Report and in the Koan of Warrior of Light. He recorded the memories of Cosmos' original World A human counterpart. He is from Final Fantasy, being the one that foretold the arrival of the Four Warriors of Light.

"Welcome to the world of DISSIDIA 012 FINAL FANTASY, kupo!"

The trademark white balls of fur with red noses and pom-poms are back. Theyt trade letters with the player via Mognet, and in Dissidia 012 run shops on the overworld.

"We shall journey on the road that continues to the final fantasy."
Voiced by: Bunta Sugawara (Japanese), Rodger Parsons (English)

A character only mentioned (and only in the remakes) in the original Final Fantasy who has been ascended to the narrator of the story, and arguably the writer of the Chaos Reports, which, if true, makes him Chaos's father. Technically, although acting only according to the circumstances brought upon him by a kingdom seeking to exploit his wisdom, he appears to be responsible for the creation of the cycle in the first place.

In Dissidia 012, it's revealed that Cid is actually the Great Will who first started the cycle of wars between Chaos and Cosmos. After the 12th war, he is horrified by what he had done and aligns himself with Cosmos. It's also revealed that he was the one responsible for sending the heroes back to their worlds after the 13th cycle.

In Scenario 000, Cid is trapped by Shinryu in a world ruled by Chaos as punishment for breaking the cycle of war. Faced with the berserk Feral Chaos and Shinryu Verus, Cid calls forth the five strongest warriors, regardless of alignment, to defeat them.