A character sheet for the Warriors of Chaos from Dissidia Final Fantasy and its prequel. Note that comments on a character's fighting style generally stay the same between games, except when otherwise mentioned. 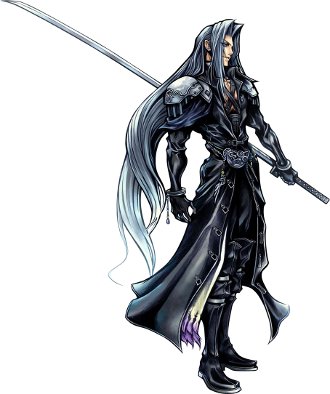 "Accept it. I am the one who guides you — forever."
"The truth can be cruel at times, but whether they can accept that truth is up to them." — Life of the Planet
Voiced by: Toshiyuki Morikawa (Japanese), George Newbern (English)

A powerful former member of SOLDIER from Final Fantasy VII. When he learned about his origins, as the result of an experiment called the Jenova Project, Sephiroth attempted to become a god by absorbing the world's life energy into himself.

Sephiroth wields a Focused Blade, striking only once with Masamune but sending out waves of energy to land multiple hits. Maximizing his damage potential requires timing the second button press to continue the attack once the first part has dealt maximum damage. He is mostly a swift close-ranged fighter but has Sword Beam attacks to pressure from range. 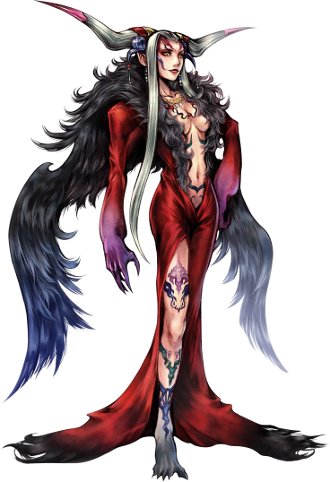 "Foolish boy. Everything is an illusion. Your hopes, your friends — Your life itself — shall fade."
"Everyone wishes they could change the past." — Gears of Time
Voiced by: Atsuko Tanaka (Japanese), Tasia Valenza (English)

An incredibly powerful sorceress who controls time and can attack with weapon-shaped long range energy attacks, aside from casting time-honored spells. In Final Fantasy VIII, she attempted to compress time, creating a world where past, present, and future would become one, and in Dissidia, she's plotting the same thing, although with a much more ambiguous view about it.

Ultimecia is a Sorceress Fusileer, embodying the very ideal of the Magic Missile Storm. Ultimecia's Bravery attacks send out flurries of magical projectiles, their exact properties depending on if the player taps or holds the attack button. Her attacks have very high Bravery damage, but she may struggle to land hits due to most of her Bravery attacks being easy to block or dodge. Her HP attacks also have a fair bit of start-up and need the opponent stunned if she expects to deal a killing blow. 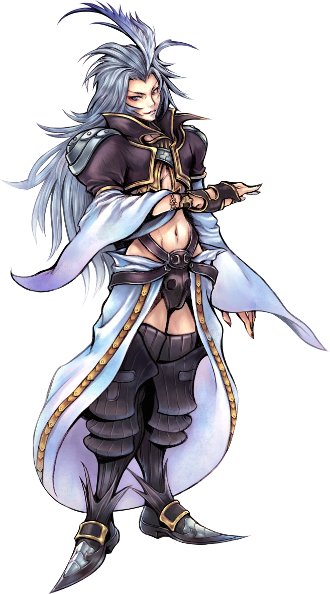 "As one who shares your fate, I simply had to see how your heart would break upon realizing how powerless you truly are."
"Everything must disappear to truly forget the truth. To do that, the world must disappear as well." — God of Destruction
Voiced by: Akira Ishida (Japanese), J.D. Cullum (English)

A confident and prideful mage who is quite jealous of Zidane for some reason. In Final Fantasy IX, he was quite a Manipulative Bastard and succeeded in attaining tremendous power.

Kuja is an aptly named Graceful Glider. Kuja sends out various forms of Holy and Flare magic to attack from close and mid-range, and can attack while moving. This is crucial to setting up his Bravery attacks, which change the second part of the combo depending on Kuja's range from the enemy; the player can land the first hit while positioning Kuja to get the follow-up they want. Kuja particularly excels at aerial combat, being the only hero able to Glide outside of EX Mode so he can more easily move about. As a downside at range Kuja's spells can be anticipated and avoided simply enough.

Letting his arrogance lead him to believe himself superior to all of the other antagonists — which causes a degree of unrest among them — he targets Zidane both for the sake of revenge, and to demonstrate his power.

During the twelth cycle, Kuja was indecisive about his role in the conflict, believing his actions would have no consequences. Surprisingly enough, he considers assisting the Warriors of Cosmos... but some may not agree with this...
Jecht 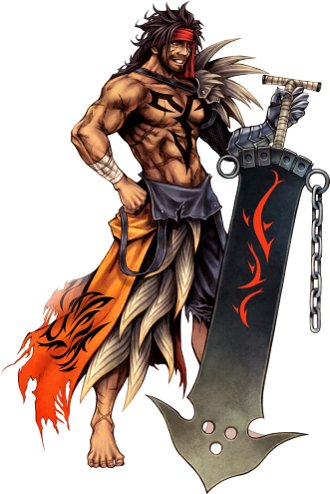 "Pesky little runt. Who do you take after?"
"Unrefined love can cause misunderstandings. It's okay... your love will shine through." — Medal of Honor
Voiced by: Masuo Amada (Japanese), Gregg Berger (English)

Tidus' father and a famed blitzball player, a sport which also becomes part of his fighting style. In Final Fantasy X, he became the Final Aeon that defeated Sin, but eventually became Sin because of that. In Dissidia, his reasons for siding with Chaos tend to express a more good attitude rather than evil intentions. Jecht is sided with Cosmos in Dissidia 012, the story mode revealing the reason why he switched sides.

Jecht is a Brutal Blitzer. He only has one Bravery attack for air and ground, but they're all he needs. Jecht's combos rely on precise button presses to properly execute the attack in three parts, variably leading to a Chase or Wall Rush depending on the player's actions, and the player can also tilt the control pad up or down to change where Jecht hits opponents. He can also chain his combos into HP attacks, depending on how the player executed his combos. Aside from being very Difficult, but Awesome, Jecht's primary weakness is his ranged attacks; rather, the fact that he has none whatsoever.

As Tidus' opponent on the side of Chaos, Jecht has no interest in villainy and is implied to just be fighting so he and Tidus can go home when the war is over.

This time, Jecht is one the side of good, and is Yuna's Guardian during their quest. His son, meanwhile, has been brainwashed to the side of Chaos, and the rivalry is alive and well.
Gabranth 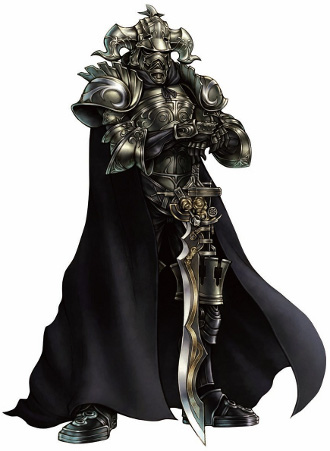 "There is no future for the bystander, as there is naught he can defend."
"Faithfully fulfill your role, even if mistaken. That is the definition of a professional." — Gates of Judgement
Voiced by: Akio Ōtsuka (Japanese), Keith Ferguson (English)

Judge Magister Gabranth is one of five elite generals who command the armies of the Archadian Empire. As a military intelligence specialist, Gabranth is privy to information that could shake the land of Ivalice to its foundation. He shares a hidden, tragic past with one of the heroes, Basch fon Ronsenburg.

Gabranth is an EXecutioner. Normally, his Bravery attacks are slow and weak, while his HP attack charges his EX Gauge and does no damage. The player isn't supposed to fight in this mode, just avoid enemies until Gabranth's EX Gauge is charged. Once Gabranth is in EX Mode, he becomes a nigh-unstoppable force of destruction, with fast, powerful Bravery attacks, difficult to avoid HP attacks, and greatly increased movement speed. However, it only lasts while he's in EX Mode; when the gauge depletes, Gabranth loses his powers again.