This is a character sheet for the Warriors that debuted in Dissidia 012. 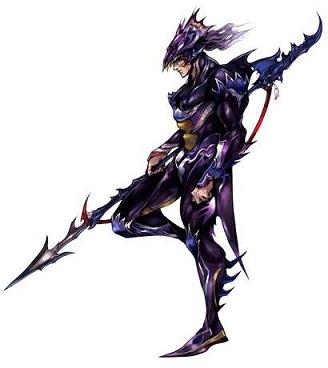 "I'm about to teach you pathetic mockeries the difference between you, and a real man!"
"I have my fair share of regrets... but I can get back on my feet as many times as it takes." — Price of Treachery
Voiced by: Kōichi Yamadera (Japanese), Liam O'Brien (English)

A knight clad in draconic armor, with lance in hand. Though not one to display emotion, he is compassionate and possesses a strong sense of justice.

The Breakout Character from Final Fantasy IV, originally meant to be Cecil's foe in the original game, finally makes it for Dissidia 012. He's on Cosmos' side officially, but seems to be striking out on his own with a less than pleasant plan, leading to rumors of him turning his coat against Cosmos.

Kain is a Tactical Striker. As a Dragoon he excels in aerial combat, utilizing various dives and jumps to strike from below and above. Kain can change the direction his basic aerial attacks sent the opponent when he lands the last hit, variably leading into a Chase or Wall Rush as needed, and he can then use a unique Dash command to jet after them and strike again before they can recover. However, he lacks for reliable long-range attacks and his HP attacks are a bit slow, if tactically diverse.

"After the endless wandering... he dreams of meeting his rival once again." — Enkidu Feather 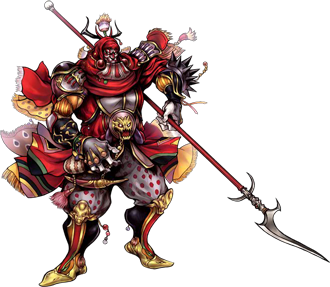 Yet another Breakout Character makes it into 012. This time, it's the legendary Gilgamesh from Final Fantasy V, armed with his wide assortment of weapons and the blazing flame of his winning spirit. Contrary to popular belief, Gilgamesh fights for neither Cosmos nor Chaos. Sometime after his banishment by Exdeath, he wanders into World B from the Rift.

Gilgamesh is a Frenzied Swordsman. He has many close-range and mid-range attacks that let him charge at opponents, and his HP attacks are best at close-range too. Where his uniqueness comes in is his weapon of choice; namely, the fact that he has eight of them. Each time he attacks, Gilgamesh summons a random sword from his Hyperspace Arsenal for the attack, and the sword he wields changes the attack's properties, variably boosting its damage, its range, generating more EX Force, damaging the opponent's EX Gauge, and so forth. This makes him truly unpredictable: when Gilgamesh attacks, no one can be really sure what's going to happen, not even him. 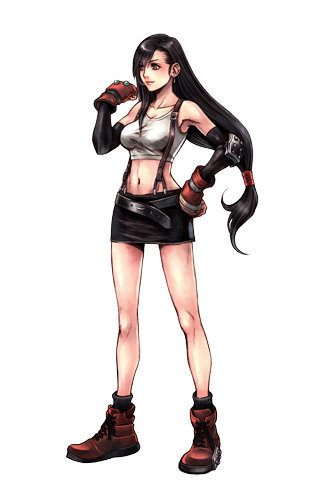 "We're not some faceless soldiers. We're friends, and we've been through a lot together."
"Stretch and forget the past. Walk down your chosen path to... the light." — Stretch Boxers
Voiced by: Ayumi Ito (Japanese), Rachael Leigh Cook (English)

An optimistic woman proficient in hand-to-hand combat. Contrary to her rough-and-tumble appearance, she often encourages her friends.

The third confirmed character for Dissidia 012. Cloud's childhood friend and love interest. She's suffering from amnesia in this game, and does not recognize either Cloud or Sephiroth, leaving her to fight alongside the Warriors of Cosmos in the hope of keeping her new friends safe in this unfamiliar world.

Tifa is a Feint Brawler. Her attacks let her incorporate a Flash Step into them with proper timing, so she can swiftly teleport around the opponent before striking, potentially catching them as they attack or block or dodge the initial strike. She uses martial arts combos for close-range attacks, but lacks for ranged options outside of a few support spells. Additionally, her stronger attacks have a bit of start-up to them, requiring usage of her feints to reliably connect with them.

Laguna Loire
"True kindness might be to sit back and just watch." — Toe Jam Tragedy

"There'd come a time when life'd pull us apart. S'not a reason to avoid people."

A spirited man who uses various guns to fight. With his cheerful personality, he casually mediates the other warriors. Laguna tries to be a bumbling but good-natured Team Dad, leading the other warriors with his own quirky brand of wisdom and insight.

Laguna is a Tactical Gunner. He wields a wide arsenal of firearms in battle to fight with the opponent at arm's length. His Bravery attack change their properties depending on how the player presses or holds the attack button, changing how many projectiles he fires, where he fires them, and so forth. Laguna's Bravery attacks have fair damage output when they hit, but are mostly meant to distract enemies to set them up for his HP attacks, which are otherwise slow and unreliable.

Yuna
"There's a world worth saving, even if you have to sacrifice yourself." — Braska's Sphere

"You fought to keep me safe. You told me all kinds of stories."

A female summoner who openly accepts her destiny and keeps on fighting bravely alongside her Aeons. A veteran of the cycles of war with Jecht, Yuna has regained many memories of her home world and her adventures there. This causes a lot of problems when they run into Tidus, a newly summoned warrior with no memories, and is fighting on the side of Chaos to best his father in a fight.

Yuna is a Grand Summoner who calls Aeons to fight for her with a wave of her staff. Contrary to most spellcasters, Yuna prefers to fight at closer quarters with melee and mid-ranged attacks. Her major shortfall is her small pool of attacks, and a lack of good ranged attacks. Her EX Mode, which dramatically boosts her damage output, can help give her that little extra edge.

"The struggles we go through — it's our experiences that teach us strength."
"Do not let good food go to waste." — Tarragoner
Voiced By: Aya Hirano (Japanese), Julie Nathanson (English)

Originally planned as the XI representative in the original Dissidia, but ended up replaced by Shantotto. But now, the foulmouthed elvaan joins the Warriors of Cosmos. One of the early warriors in the cycle of war to serve Cosmos, Prishe fought alongside the Warrior of Light for Cosmos. Not that he remembers; Prishe vanished from the cycles long ago, her influence on them only known by a few who remain now.

Prishe is a Combo Blitzer. Unique for her, Prishe can chain her Bravery attacks together in her equip menu, letting her deal powerful Bravery combos with a variety of tactical uses. Her Bravery combos can also activate Skillchains depending on how she chains them, adding a bit more damage to them. Prishe's major weakness is her HP game, with slow and easy-evaded HP attacks that can leave her struggling to land a killing strike. 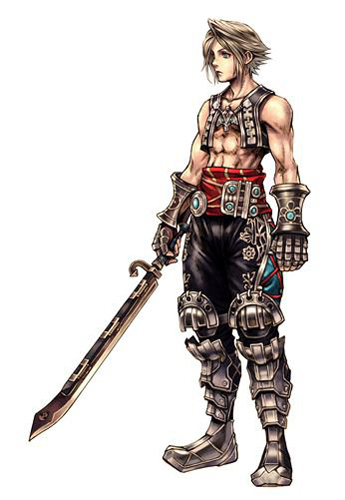 "Just believe in me and wait somewhere safe."
"One must make their soul like the wind to continue dreaming. Dreams will come true..." — Galbana Lilies
Voiced By: Kensho Ono (Japanese), Bobby Edner (English)

A cheerful youth who skillfully uses a variety of weapons in battle. Confident in his skills, he fearlessly enters any fierce battle. Finding Terra under Kefka's control, Vaan appoints himself her knight to get her to safety and out of Kefka's clutches. Though his battle prowess is impressive, his allies don't think much of his slow mind.

Vaan is an Adroit Attacker. Vaan has a large arsenal of weapons and can use them at a variety of ranges. The trick to him is what those attacks will do. Every time Vaan attacks, he switches his currently active weapon to one matching the attack, but if he uses the same attack while that same weapon is still equipped, the attack will do something different. Using Vaan well requires knowing when to switch attacks and weapons and when to keep them up to use their secondary versions. 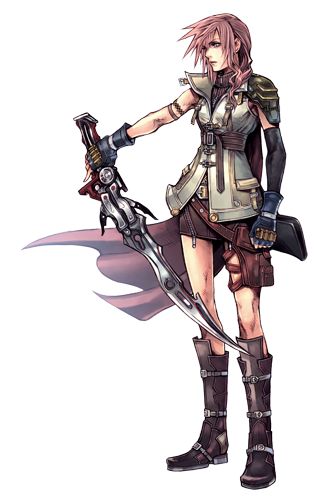 "You can sprout threats all day - we're not turning back now!":
"There is nothing to detest. Everything is precious." — Survival Knife
Voiced by: Maaya Sakamoto (Japanese), Ali Hillis (English)

From Final Fantasy XIII comes Lightning, a former soldier with a gentle heart, though her harsh mannerism and speech can leave a cool impression. Though quiet and cynical among Cosmos' ranks, Lightning still holds onto hope to win the war and go home, but becomes suspicious of Kain when he attempts to strike her down. She effectively acts as the leader of the other newcomers added to Dissidia 012, and is the central character of the "012" storyline.

Lightning is a Paradigm Commando. As in her home game, Lightning can switch between Paradigm roles to change her moveset; as a Commando she uses a variety of sword and gun attacks, as a Ravager she casts offensive spells, and as a Medic she uses curative spells to restore her Bravery without attacking. This makes Lightning a well-rounded character with a lot of attacks, but her Bravery game is a bit lacking.