A character sheet for the Warriors of Cosmos from Dissidia Final Fantasy and its prequel. Note that comments on a character's fighting style generally stay the same between games, except when otherwise mentioned. 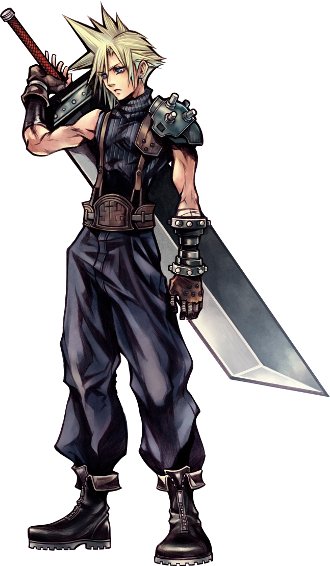 "What I want most — I'll find myself."
"There are no lies, what I believe, is the only truth." — True Past.
Voiced by: Takahiro Sakurai (Japanese), Steve Burton (English)

The famous protagonist from Final Fantasy VII, a former member of the Shinra Electric Power Company's SOLDIER program, Cloud became a mercenary working for the eco-terrorist group AVALANCHE after his home was razed by his idol, the legendary SOLDIER Sephiroth. In a mission gone wrong, he encounters the mysterious Aerith, the last of the Cetra, drawing Cloud into a conflict to confront not only the threats to the Planet, but the circumstances of his own Mysterious Past.

Cloud's fighting style is described as a Buster Basher, both things his massive sword is very good at. Cloud's sword blows do high damage and tend to slam opponents into walls and floors for Wall Rush, piling on even more damage. He's even stronger in his EX Mode, crushing blocking opponents and getting a massive boost in attack power as long as his HP is high. As a downside he is a melee brawler with few ranged skills and he moves and attacks slowly.

Seeking for a reason to fight, Cloud finds himself confronting Sephiroth once again, who, like he did in their original game, tries to manipulate him, calling him "just a puppet" once more.

In Dissidia 012, Cloud starts out fighting for the side of Chaos. However, his reluctance to fight due to his memories from before he was summoned to fight for the gods leads him to (once again) question what he's fighting for.
Squall Leonhart 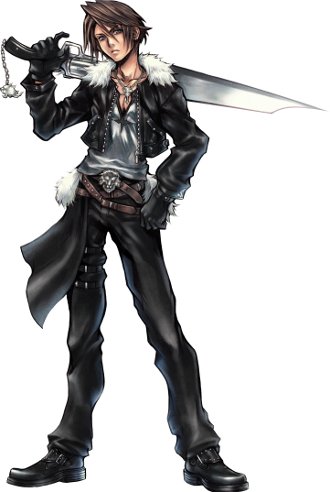 "I only came to fulfill my promise. It's because of them that I can't allow myself to stop. I know that I'm not alone."
"Of course I care what others think! I could love others if I was true to myself." — Unshelled Bullet.
Voiced by: Hideo Ishikawa (Japanese), Doug Erholtz (English)

The reluctant hero of Final Fantasy VIII, Squall was an elite member of the SeeD mercenary company which opposed the rise of the Sorceress Edea, his fate became entwined with that of the succession of witches when his sister Ellone and new love Rinoa become the target of her mysterious plot.

Squall's fighting style is a Relentless Revolver. He specializes in swift, long sword combos that deal heavy damage, and his spell attacks act as support skills, helping to set opponents up from mid-range for him to land a sword attack easier. His EX Mode flat doubles the damage output of most of his melee attacks, making him even more effective at swiftly draining the enemy's Bravery. His shortcomings come from his HP attacks, many of which are slow to start-up, short-ranged, and/or are easy to avoid. Squall excels at building up his Bravery, but struggles to land a finishing blow.

From Final Fantasy VIII to Dissidia, Squall is more of a loner than in his game (at least when it comes to fighting), but more secure of his intentions and of the fact that he cares for his allies. Ultimecia, showing a curious interest in him and becomes a more personal foe for Squall.

Squall doesn't have much of a role in the main storyline (like the other Warriors who make it to the 13th cycle), but is shown interacting with Laguna and the others in the Reports.
Zidane Tribal 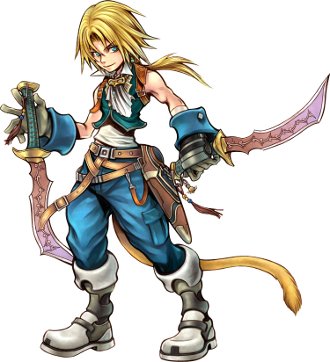 "Do you need a reason to help someone?"
"The ability to accept fate and shoulder that burden alone attracts others" — Theater Ticket.
Voiced by: Romi Park (Japanese), Bryce Papenbrook (English)

The hero of Final Fantasy IX, the ever courageous thief and lover of women, comes to Dissidia to embrace the adventure like a challenge. Wielding two daggers that he can combine into a double-blade and having his Trance abilities constantly available, he dominates air combat with speed and diversity.

Zidane is aptly described as an Aerial Ace. With a good pool of aerial attacks, ground attacks that let him take to the skies, and strategic variety in where he strikes from when attacking, Zidane can run circles around his enemy and attack from any angle. He also has several HP link attacks. This makes him good at swiftly striking and damaging the opponent's HP directly. However, he's not so good at hitting their Bravery, with his Bravery damage output being mediocre at best.

Teaming up with Bartz, he races in search for his crystal. However, as Kefka, Kuja, and Exdeath team up to separate them (and Squall), his faith in their success slowly starts to weaken, and so his confidence must be restored to confront the growing adversity.

Again, Zidane barely has any role in Dissidia 012, appearing primarily in scenes with Kuja before being defeated by Kain.
Tidus 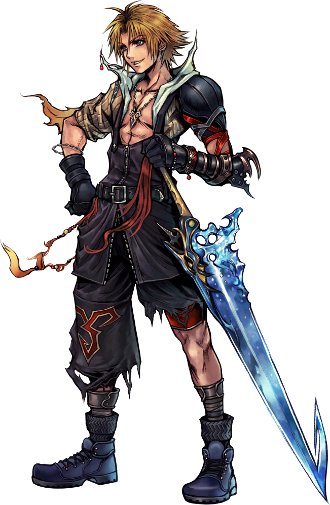 "This isn't over yet. There's no tomorrow for me... unless I beat you today!"
"I'll see my will through and continue on my story, no matter what awaits." — Fayth's Dream.
Voiced by: Masakazu Morita (Japanese), James Arnold Taylor (English)

The hero from Final Fantasy X. The star player of the Zanarkand Abes, Tidus was torn from his home of Zanarkand and thrust into the world of Spira where he accompanied the Summoner Yuna on a pilgrimage to the ruins of his home city to vanquish the monster Sin who was said to have destroyed it one thousand years ago.

Tidus is a Spry Striker. Many of his Bravery attacks have a dodge effect built into them, letting Tidus avoid the opponent's attacks and land a counterstrike in the same motion. His attacks are fairly strong already and get even stronger in his EX Mode, which also makes his dodges more effective. As a downside, the same "dodge" motions built into his attacks makes it difficult for him to be aggressive, as their startup lag makes it easy to block or dodge his strike.

During this cycle, he's summoned by Chaos for a chance to fight against Jecht, who's on Cosmos' side. However, meeting with Yuna, who remembers their journey together, will take that into another direction...
Shantotto 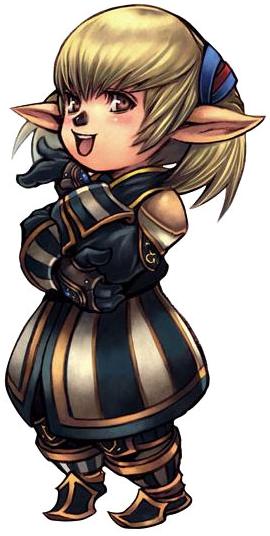 "Of course! The future is for one to take by brute force!"
"The most feared and renowned of fame, how splendid!" — Boiling Blood.
Voiced by: Megumi Hayashibara (Japanese), Candi Milo (English)

A popular NPC from Final Fantasy XI. A veteran from the Crystal War, retired Minister of Windrust, and a Black Mage without equal, Shantotto spends her days in retirement researching magic and tasking adventurers to aid her in her studies in exchange for training in magic and staff-fighting.

Shantotto is a Chainspeller. Her Bravery attacks are mostly supportive, and some don't even damage the opponent. They're there to set her enemies up for her HP attacks. Unique to her, Shantotto can chain her HP attacks into each other to pile on extra Bravery damage before dealing HP damage, and the more Bravery she has, the stronger her HP attacks get, with larger areas of effect, higher damage, and so forth. Her struggle is in building up enough Bravery to take advantage of these effects, as in their base forms, her HP attacks are weak and easy to avoid without good usage of her support Bravery attacks.

By the thirteenth cycle, Shantotto has retired from the War, though she hasn't actually escaped the cycle — instead, she resides at a sanctuary for the victors of previous wars. Her only appearance in the main storyline is a flashback, but she appears in a mini-story where she meets the player's selected character, dismisses it, then has it get rid of the manikins she inadvertently let loose, and finally offers a chance to fight her as reward.

As expected thanks to the first game, Shantotto now stands on the front line along with the other warriors, finally getting a starring role... technically. We get an expansion on her fight with Gabranth, and a mention of her researching "the ultimate spell."
Advertisement: