Recap / One Piece: Land of Wano Arc
aka: One Piece Wano Country Arc 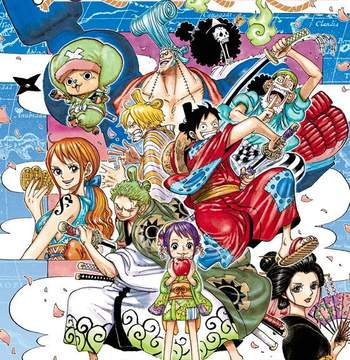 With Sanji back in tow, Luffy and his group (Nami, Chopper, Brook and Carrot) head to their designated meeting spot of Wano to both rejoin their crew and help Momonosuke and his retainers, Kin'emon, Kanjuro and Raizo, to retake the throne from the current emperor of the nation who ousted his father. However, complicating matters is the fact that Wano is affiliated with Kaido, one of the four Pirate Emperors, who's still miffed at Luffy for the loss of his SMILE Fruit operation in Dressrosa. After barely escaping Big Mom's grasp, can the crew prevail against another equally strong and feared big named pirate?

This arc contains examples of:

open/close all folders
A to H
I to P