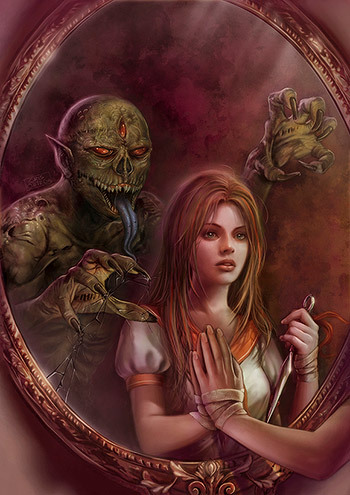 Objects in mirror are closer than they appear. (Image

.)
"What if the mirrors are showing us something that's not real...?"
— Mirrors

Mirrors are inherently creepy objects. If you're looking in a mirror, there's also someone looking at you. A movement in a mirror can make you jump. It's no surprise that they're associated with badness.

But what if there were something more than just one's own reflection in the mirror? What if the mirror showed something else looking back at you?

This is the Mirror Monster! Though a mirror is really just a pane of glass and silver, in fiction it can become a gateway — something terrible could come out... or something terrible could try and suck you in. A Mirror Monster could be an image only visible in a mirror. It could be a ghost fettered to the world of the living by a mirror. It could be something which comes out of a mirror or communicates via mirror. The key thing about this trope is the horror is directly connected to the mirror itself.