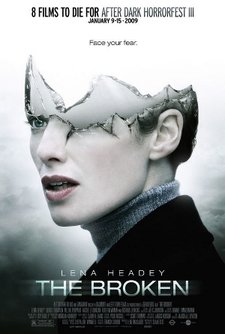 A Psychological Horror Thriller about a female doctor who sees her own clone and follows her.

The movie later goes on to play Puppeteer Parasite motif, becoming weirder and weirder from scene to scene. The film was part of the After Dark Horrorfest film festival.

The Broken contains examples of: