Mirror Monster is a webcomic written by rosiegh0st (formerly ghostieblu), and published on Tapas 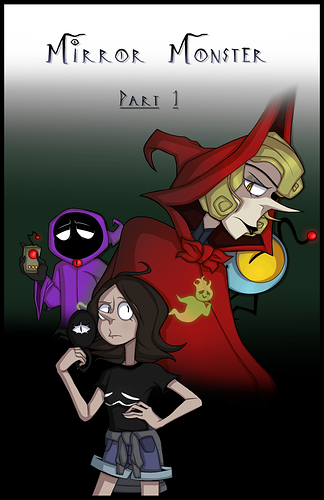 Josie is your regular, average mischievous kid. Well, she would be if it weren't for those weird dreams of the mysterious woman in a dark forest she keeps getting.

Anyways, her relatively normal life is shattered when she comes into the possession of a strange mirror and a robot named Bug Bot who claims to be working for the woman Josie keeps seeing in her dreams. Josie then discovers that the mirror is a portal between worlds as she suddenly finds herself trapped within a parallel world known as "The Mirror World" and is now on the run from Erena and her minions as she tries anything to get her mirror back.