Significant or recurring characters on Community who are either Greendale students or Greendale faculty members. 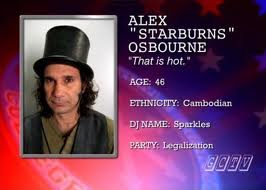 Dude. My name is Alex.
Played by: Dino Stamatopoulos

A sleazy drug-dealer and student who is often a classmate and rival of the Study Group. 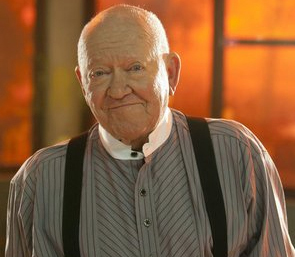 Thanks for eating all the macaroni!
Played by: Richard Erdman

An elderly classmate and rival of the Study Group, who frequently acts like a rowdy teenager.

A ditzy stoner, hippy, foosball enthusiast and musician who dates both Britta and Annie in season one. 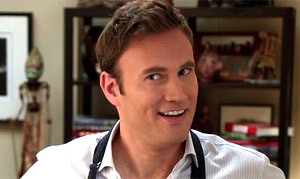 Played by: Greg Cromer
"Doc Pottery-wood". I like it.

A friendly, charming and pleasant doctor who attends classes at Greendale. He is apparently good at everything, which earns Jeff's rivalry and hatred.

Buddy Austen
Played by: Jack Black
"I know that you're scared that adding a new member might throw everything out of its natural— (opening credits) —rhythm."

A Spanish classmate who tries to join the Study Group in one episode.

Meghan
Played by: Hilary Duff
"See, the rest of us feel ashamed of ourselves so we act like bitches to make ourselves feel better."

A student at Greendale who was the leader of a Girl Posse that had the school on edge due to their nasty dispositions and overall bitchiness. Her reign of terror came to an end when she ran into Abed and was soundly defeated in a battle of trash talking.

Lukka
Played by: Enver Gjokaj
"I miss cleansing the fields and forests from the unclean people who stole my country. I miss the smell of the villages burning...[laughs]... I miss the way they used to run from our tanks in fear!"

A student at Greendale from the Balkans.

A party enthusiast who communicates primarily by shouting "POP POP!".

A fellow student at Greendale who the Study Group try to help through a serious depression by playing Dungeons & Dragons. He later shows up throughout the series as a campus DJ.

Garrett Xander Lambert
Played by: Erik Charles Nielsen
"I may be stuck in this vent. It is too early to tell."

A rather socially and physically awkward student at Greendale who is prone to hysterics at the slightest provocation.

A dance major and frequent background presence at the school. She has an intense rivalry with Pierce and eventually becomes Neil's girlfriend.

A rather quirky student who insists on replacing the letter 'K' in various words with 'Q-U'.

An intensely competitive and driven student who develops a rivalry with Annie over Annie's plans to form a Model U.N.

Gary
"He grew up in a land without sun!"

An unseen friend of Shirley's whom the rest of the Study Group loathe intensely.

Mike
Played by: Anthony Michael Hall
"Dude, my life is a gym!"

A boorish and obnoxious gym fanatic who gets into conflict with Jeff.

An almost superhumanly nice biology classmate of the Study Group, who's apparently limitless patience is sorely tested when he is placed into their group for a class project.

A friend of Abed's and his freshman year roommate.

Subway
Played by: Travis Schuldt (first), Patrick Bobbitt (second)
"Please don't think of me as any less human than yourselves. I'm here to hang out, take weird classes and party as hardy as my morality clause allows."

A student who, after signing a legal "Corpohumanization" contract with Subway, acts as the company's anthropomorphic representation on campus after Subway sponsors Greendale in season three. He develops a potentially disastrous mutual infatuation with Britta.

Rachel
Played by: Brie Larson
I started this coat check without permission anyway.

A girl Abed met and liked when she was checking coats at a dance in season 4. They start dating in season 5.

Eric Wisniewski
Played by: Bill Parks
A recurring red-haired character.
Koogler
Played by: Mitchell Hurwitz
"I know what you guys think of me, OK? 'Hey, it's Koogler! He's cool! He likes to get laid! He's not that old!'"

A middle-aged student at Greendale who lives in a state of arrested development, leading him to act like a fratboy and deny that he is "that old".

Greendale's statistics professor. She develops a tumultuous relationship with Jeff in season one.

Marion Holly
Played by: Tony Hale
"If you so much as hum three notes from that Righteous Brothers song, I will come at you with everything I've got. Okay?"

June Bauer
Played by: Betty White
"I'm going to use this to attack you and you use respect to defend yourself."

Eustice Whitman
Played by: John Michael Higgins
"Only when we stop stopping our lives can we begin to start starting them."

Professor of Accounting and coach of the Debate Team. His entirely teaching philosophy and approach can be summed up with "Robin Williams in Dead Poets Society.

Sean Garrity
Played by: Kevin Corrigan
"Word of advice; if you ever rear-end the Dean's car, don't tell him you're gonna pay him back in acting."

Cory "Mr. Rad" Radison
Played by: Taran Killam
"Glee club is what we are. It's all we are."

Marshall Kane
Played by: Michael K. Williams
"You spent your life in the army. I spent mine in prison. Two places where a man's worth is only as good as his uniform. Now, out here it's supposed to be different. And in my class it will be."

The professor of biology. An ex-convict who gained his degree while in prison, Kane is quite possibly the sanest person on campus.

Vice Dean of Greendale's AC Repair Annex and, unbeknownst to Dean Pelton, the one holding true power at Greendale.

Professor Noel Cornwallis
Played by: Malcolm McDowell
"History is written by the victors. Of course, we all know the quote, but what does it mean? Well, according to Oxford University, it means my twenty years of loyal service there means nothing next to a little slip-up with a coed."

The extremely apathetic and jaded professor of history. Cornwallis was once employed at Oxford University until he was forced to leave in disgrace and makes no secret of his contempt for Greendale.

A professor of Grifting (and actual grifter) who spends a short amount of time at Greendale. Secretly hates the school and only applied to work there as a way to grift the student body for money. He becomes one of the Activity Committee's final foes in the series.

Jerry
Played by: Jerry Minor
"YOU COULD BE A PLUMBER!"

The Greendale campus janitor who takes an interest in Troy after seeing his skills as a repairman.

A disgruntled deputy custodian who drives the events of "Modern Espionage," the series's final paintball episode.

The Greendale campus groundskeeper, who is maintaining a secret trampoline.