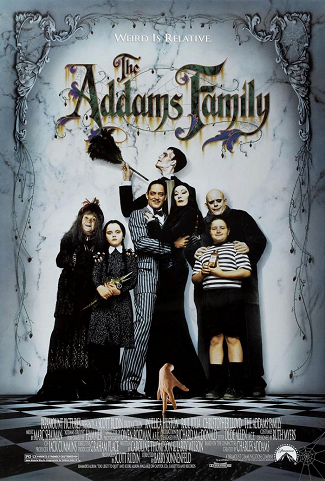 It's a family thing, and it won't quit
They keep it together, y'all, that's it
They're not ordinary, just strange
Some say loco, insane in the brain
But you know that you love 'em
In a class by themselves, none below, none above 'em
It ain't nothin' to be ashamed of
So give love to the folks who go by the name of...
— Tag Team, "Addams Family (Whoomp!)" (from the Addams Family Values soundtrack)
Advertisement:

Meet The Addams Family: father Gomez (Raúl Juliá), mother Morticia (Anjelica Huston), daughter Wednesday (Christina Ricci in the role that made her a star), son Pugsley (Jimmy Workman), butler Lurch (Carel Struycken), and Granny (Judith Malina; Darrined by Carol Kane for the sequel). The film series is based on the cartoons created by Charles Addams and the 1960s Dom Com they spawned.

The first film, released in 1991, focused on the family's search for Gomez's missing brother, Fester (Christopher Lloyd). Fester's return leads to a joyful reunion between the brothers. However, all is not as it seems: Fester's scheming "mother" (Elizabeth Wilson) is working with a money hungry lawyer (Dan Hedaya) on a plot to steal the family's fortune. This causes problems for the family and Hilarity Ensues.

It was successful enough that a sequel, Addams Family Values, was released in 1993, which added a new child (Pubert) and a new love interest for Fester in the form of Debbie Jellinsky (Joan Cusack), the children's new nanny who drives a wedge between Fester and the rest of the family.

A third movie starring the Family, Addams Family Reunion, was released direct-to-video in 1998 with an (almost) all-new cast. Serving as a Pilot Movie for the then-upcoming The New Addams Family series, it is not related to the prior two films.

After plans for a stop-motion adaptation fell through (featuring the involvement of Tim Burton, whose The Nightmare Before Christmas and Corpse Bride were to have served as inspiration), an animated reboot was released in 2019, courtesy of MGM.