NOTE: This page is solely for the residents of Vineland Island. Any other characters should go on the main characters page. Islanders introduced earlier than Episode 28 go on this page.

. QR Codes are available for most characters, but a few have gone unreleased. Any that have been recreated for this page are marked with "Replica". Replicas will not share the same tastes in clothing or food as Vinny's.

Examples for Does Not Like Spam and Trademark Favorite Food are for the North American version of Tomodachi Life. Some of the listed examples may not be available if one of the QR Codes listed below is scanned into a copy of the game from a different region.

For those avoiding spoilers, it is recommended that you only view a folder after you've watched the episodes listed on it.

open/close all folders
Introduced in Episodes 28 to 32

"You just don't get it, do you, Vinesauce's look-alike?"

A young man who was stripped of all of his possessions by his fanatical Christian mother. His introduction to the island implies that he holds some sort of unknown power.

Isaac is a Walking Spoiler.

An adorable gray tabby cat who moved to Vineland Island a while after leaving the similarly named town of Vineland, a village full of animals that Mayor Vine was running at the time. Nobody really knows that she exists.

"This is some serious avant-garde stuff I'm working on."

Some kind of anthropomorphic horned donkey thing who apparently grants riches to those it kicks. Has a horribly wheezy voice.

Rap superstar Snoop Dogg. He's bought a home on Vineland Island... and it's a hamster cage.

of a Vineshroom. He eventually starts a podcast about metaphysics and the nature of Tomodachi Life.

A skeleton by day, entertainer by night.

A skeleton... and that's about it. Originally intended to be Skelorita's male counterpart, except she's also a girl. Was evicted by Vinny almost immediately.

A walking, talking piece of broccoli who Vinny introduced to the island as a replacement for Skeleton. His smug face ticks Vinny off to no end.

Introduced in Episodes 34 to 37

"I call it 'Street-Corner Horror.'"

A skater dude, mass murderer, and relative of Broccoli who moved to Vineland Island after one too many physics incidents. In Episode 40, he became a child thanks to a Kid-o-matic.

"Slow it down, Captain."

Three alien men identical from conception, the Jahns are an experiment to see just how different genetically identical men can become. In-story, they're alien "invaders" who come in (relative) peace to research the curiosities of Vineland Island and its inhabitants.

The Jahns are Walking Spoilers.

The so-called leader of the Jahns, identified as such because he's the one who wears a helmet consistently. He's the most outgoing of the trio, and acts as their spokesperson.

The second member of the Jahn Trio. He seems to be the least experienced of them, and thus doesn't do as good of a job at interacting with Earth culture.

"I could rule the world with this kind of talent!"

The third member of the Jahn Trio. He doesn't stand out very much compared to the others.

The daughter of Ralph Bluetawn and Lamb Chop. In Episode 40, she became a grown-up thanks to an Age-o-matic.

"I am a useless ayusshole."

The son of Alpaca and BonziBUDDY. In Episode 40, he became a grown-up thanks to an Age-o-matic.

Advertisement:
Introduced in Episodes 38 to 47

"I love being creative and using my imagination."

A ghoul known for riding around on a motorcycle. When off-road, though, he's very slow. 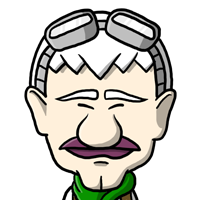 Ralph Bluetawn and Lamb Chop's second child, and Hailey's brother. He left home to travel the world, but ended up being stuck at the port. 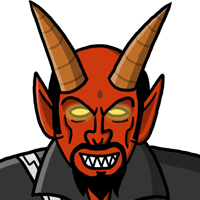 The lord of darkness. Somehow found his way onto the island after retiring from ruling all of hell. 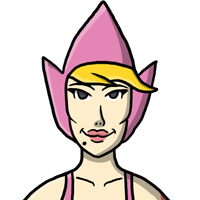 "For your 7 o'clock Mii News, this is Pinker Pink, signing off."

Tingle's fairy companion from his very own game. She looks like someone in the chat's mom. 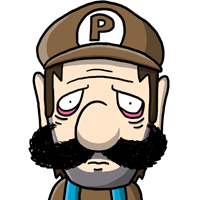 "I'm a people watcher. It's kinda like a sport for shy people."

Sponge's younger brother, who is taller and wears brown. He was originally created by Vinny as a bunch of scribbles in Game & Wario's Miiverse Sketch mode. Appears in Super Sponge Bros. as well, replacing Luigi in the game's two-player mode. 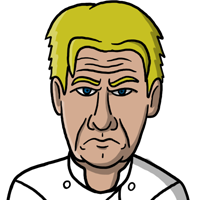 A Olympian god turned chef, prone to yelling at others for mistakes. 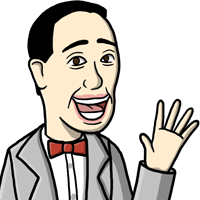 An eccentric, childlike man living in a cartoon world. His reputation on the island is a bit stunted due to a certain incident in a movie theater, but he gets along fine. 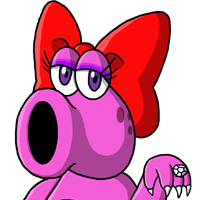 "We should start a band! You hum. I'll rap. We'll call ourselves Hummus Rap!" 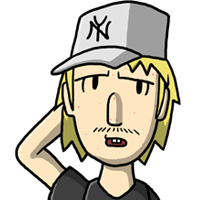 A socially awkward teen who takes everything Vinny says as gospel. Ugly, gullible, and speech-impaired. He also has strange taste in friends, as seen with his encounters with Clown and others.

Introduced in Episodes 48 to 49

"We the Jahns will assimilate."

It's all over. The Jahns, as well as their Distaff Counterparts, have arrived. Under the command of their new captain, Jahn #3, they have begun replacing the other islanders, and now none are safe.

An FBI agent called in to rid Vineland Island of the Jahn menace, who did so rather effectively.

"I'm most relaxed when I know the rules. That way I know what's expected of me."

Scully's partner and paranormal investigator. Solved pretty much the entire conflict between episodes.

"People tend to misunderstand me. I really have the best intentions!"

The second 'clone' of Vinesauce, Vineschnoz somehow managed to get to the island from the corrupted island. As expected, his face has fewer differences from Vinesauce's than Vlinny's does, but his large nose is more easily noticed and he is slightly shorter than Vlinny. He's also significantly less interesting than those two. He appears to have kept his status as a former baseball player.

For tropes related to the Tomodachi Collection original, see the section for one-off Miis on the main character page.

"You've been such a great friend to us."

Walrus and Alpaca's daughter. She spent several months not being grown up.

A mad scientist who often drags his grandson Morty on dangerous adventures. Shortly after he arrives, Vinny turns him into Tiny Rick.

"The fun thing about life is that you never know what will happen next!"

The star of everyone's favorite high-quality film, The Room. He has decided to say "hai" to Vineland Island as a last-minute addition to the series.