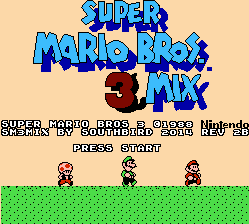 The game was built using the Southbird 2011 Disassembly note  a conversion of the Super Mario Bros. 3 (specifically, the PRG1 revision) code into 6502 assembly, the low-level programming language associated with the NES's processor , but despite the increased amount of options provided by low-level hacking, the main focus is adding to existing mechanics rather than overhauling the entire game as with hacks such as Mario Adventure and its sequel, Koopa Kingdom Escape (the latter being made because of and using the disassembly work).