The main male protagonist. An ordinary boy bored with his ordinary life and with dreams of becoming a professional lifter, Renton's life is turned upside down when Eureka enters his life. He is one of the only people besides Eureka herself who can pilot the series's signature LFO, the Nirvash typeZERO.

The main female protagonist. Eureka is a mysterious girl with an affinity for machines who has trouble opening up to other people until she crash-lands her LFO, the Nirvash, on Renton's house.

The leader of Gekkostate. Holland was once a Captain of the SOF, but defected and formed an anti-government movement. To the public, he is known as the world's top amateur lifter and is Renton's longtime idol. He pilots the Terminus typeR909, and later the Terminus typeB303 Devilfish.

The pilot of Gekkostate's ship, the Gekko, and cover-girl for their magazine Ray=out. In a relationship with Holland.

Photographer and main editor of Ray=out. He was also a former member of the military and defected with Holland. 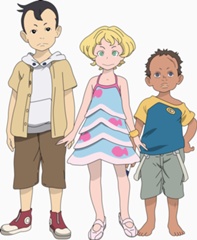 Eureka's adopted children, who she took care of after she killed their parents during a military raid. They are fiercely protective of their "Mama" and like to play pranks on Renton, but warm up to him over time.

Pilot of the Gekkostate LFO, Terminus typeR606. Laid-back and will do anything for his partner, Hilda.

Physician of the Gekkostate crew. Sometimes gives advice to her crewmates.

An enigmatic old man who always hangs around the Gekko.

Best friends with Jobs; they snuck into the crew. Woz handles software.

Second-in-command of the Gekkostate crew. One of the few people Holland confides his troubles to.

One of the more ordinary members of Gekkostate. Has a crush on Moondoggie.

The newest member of Gekkostate before Renton. Jealous of Renton, despite being viewed as a big brother figure by him.