This is the character sheet for Suite Pretty Cure ♪.

Tropes associated with both of them 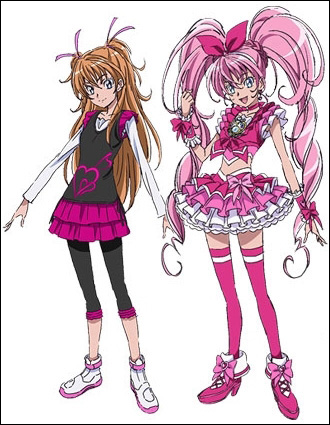 An energetic jock who loves eating sweets and playing sports. She tends to be bullheaded and act before she thinks, but her heart is generally in the right place. As the series progresses, she rediscovers her love of the piano. 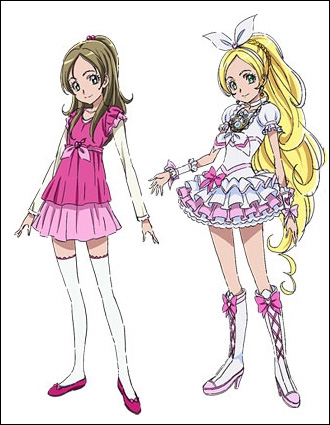 An intelligent and cool-headed patissier who works at her family's pastery shop. She becomes incredibly flustered and dreamy when romance is involved, and is short-tempered when dealing with Hibiki. 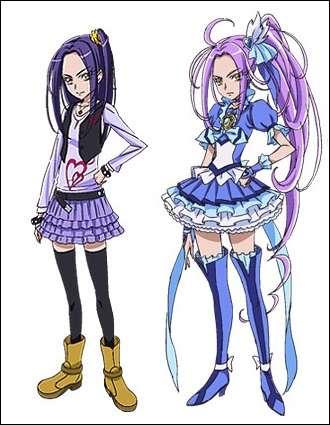 Siren, post-Heel–Face Turn. Free from her jealousy and the influence of the Noise of Evil, her true personality shines through as a headstrong yet socially-awkward girl whose only wish is to make friends. Her ability to shapeshift has been lost, trapping her in human form under the alias of "Ellen Kurokawa". She loves to read books on how to act in certain situations, being unfamiliar with human social conventions. 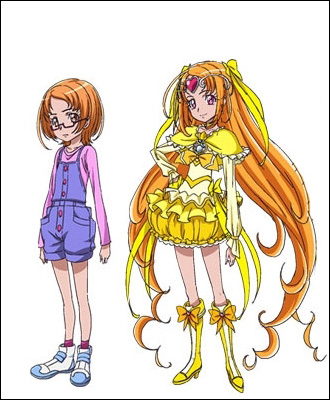 The princess of Major Land, after revealing herself as the masked Cure Muse. By far the most serious and pragmatic of the four Pretty Cures, her outward determination hides her emotional fragility in the face of the threat against her family. She can be incredibly blunt when criticising others.

A Songstress of Major Land. Hummy is sincere, simple-minded, and relentlessly optimistic. 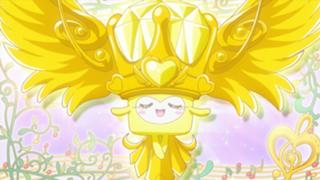 The Fairy of Sound who gave birth to all the sounds in this world. The other Fairy Tones were born from her. She usually resides inside the Healing Chest that was found in the dark forest.

The Queen of Major Land. Wife of Mephisto, mother of Ako, and daughter of Otokichi.

The mysterious tuner of Kanon Town, who is working on a large organ. The previous King of Major Land, father of Aphrodite, and grandfather of Ako. Long ago fought and sealed away Noise.

The King of Minor Land, a dark opposite to Major Land. His goal is to create the Melody of Sorrow, which would plunge the world into an endless despair. He is actually the missing king of Major Land, who was brainwashed by the evil power of Noise. He is later cured by the Pretty Cures and returns to Major Land. 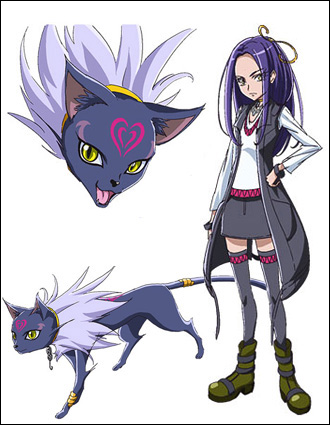 Mephisto's second-in-command. A former Songstress of Major Land, she defected to Minor Land after Hummy was chosen over her to sing the Melody of Happiness. She is incredibly vain and prissy, and possesses the ability to shapeshift at will, often taking the form of a human girl called "Ellen". She later pulls a Heel–Face Turn and becomes Cure Beat, who is covered in the Pretty Cure section.

Tropes associated with the Trio the Minor
Bassdrum

A second year student and Hibiki's friend who also appears to be on the same team as Hibiki in many sports, mostly in soccer.

A third year student, the Club President of the Sweets Club and Kanade's senpai. Also known as the "Princess of Sweets".

A third year student, school idol, and the leader of the group called the "Musical Princes". He's popular with girly, particularly with Kanade and Siren/Ellen have a crush on him.

The Big Bad of the movie and an underling of Noise.

They are Howling's lackeys and resemble the Trio the Minor. The members are Sharp, Natural and Flat. During the movie, Sharp fights Cure Melody, Natural fights Cure Rhythm, and Flat fights Cure Beat.