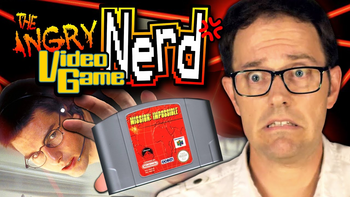 note formerly the Angry Nintendo Nerd before he stopped focusing on just the NES and realized he couldn't sell T-shirts with someone else's trademark on them, a chronically ill-tempered and foul-mouthed gaming geek with a huge collection of bad video games, and a predilection for Rolling Rock beer.

He plays weird, old, and, more often than not, Nintendo Hard games, some of them with the worst Fake Difficulty imaginable. We're talking truly terrible here. The Nerd holds a specific torch of hate towards licensed games, especially ones published by LJN Toys, which he sees as manipulating hopeful and oblivious kids into buying complete trash. His reviews inevitably spiral downward into a barely coherent rant peppered liberally with Cluster F-Bombs and scatological references, culminating in a violent frothing rage that would make even the Incredible Hulk piss his pants. The Nerd also gets frequent unwanted visits from the stars of the games he plays, from Bugs Bunny to Freddy Krueger.

Note, however, that a handful of episodes are not so much about a single shitty game as they are about a certain console or accessory (there are even a few that aren't about video games at all.) Aside from giving reviews, the Nerd has also given a bit of video game history, such as a summary of the infamous Console Wars.

The Nerd (and Rolfe by extension) is extensively respected for the impact his videos had on online video reviews for years to come, with the show being seen as a Gateway Series for the medium to transition to the mainstream. He's regarded as one of if not the most influential figure in pioneering the format's structures and conventions, to the extent that he's considered the Trope Codifier of the Mid-Review Sketch Show. Many a number of reviewers who have since popped up on the Internet owe much to the Nerd, with his rage, vulgarity and sketch comedy being turned into the bread and butter of countless Caustic Critic personas to come, almost to the extent of forming a subgenre. One could even argue that his show is a precursor for online shows in general, as it predates YouTube by nine months, along with the ripple effect left by the Nerd continuing to extend into the present day with the advent of the Analysis Channel and also the video essay being an indirect result of the Nerd's influence on online content creation.

The success of the series enabled Rolfe to work on Nerd-related projects in different media than videos. September 2013 saw the release of The Angry Video Game Nerd Adventures, a throwback to Nintendo Hard NES platformers developed by FreakZone Games and published by ScrewAttack. It gained enough of a following for a 2016 sequel, called The Angry Video Game Nerd II: ASSimilation. July 2014 then saw the premiere of Angry Video Game Nerd: The Movie, written and directed by him, with the film's plot involving the Nerd getting caught up in a government conspiracy after trying to disprove the old urban legend of the landfill burial of the infamous E.T. game, a game he had notably never covered at the time.

The Nerd was christened by Doug Walker as the greatest video game critic of all time, and Walker and Rolfe are good friends in real life, with the Nerd appearing in many Channel Awesome projects.

An independent filmmaker when he's not being the Nerd, Rolfe maintains a website at Cinemassacre.com

. Rolfe does other web-based video shows, including You Know Whats Bullshit, where he rants on daily annoyances (keeping his foul language and a sharp sense of observation) and Board James, where he reviews board games (keeping with the game-reviewing aspect, though milder).

These tropes are ASS:

"ASS" in the Bible

"ASS" in the Bible