Series / I Know This Much Is True 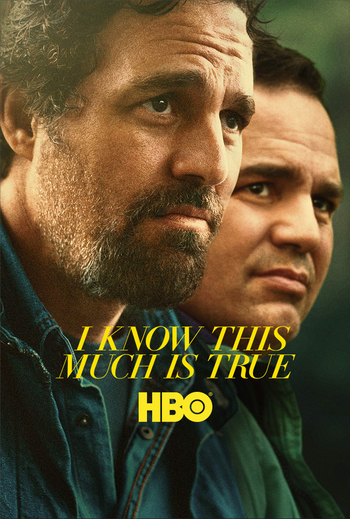 I Know This Much Is True is a 2020 HBO drama miniseries based on the 1998 novel of the same name by Wally Lamb.

Ever since childhood, Dominick Birdsey has had a love/hate relationship with his identical twin brother Thomas, who has always been treated preferentially by their family due to his severe schizophrenia. His resentment is tempered by his need to protect his vulnerable twin, while viewing Thomas as a dark mirror of the fate Dominick was spared only by a fluke of genetics. As an adult, Thomas is largely able to live an independent and peaceful life with medication, but during one of his lapses, he experiences an episode of violence that lands him in a mental institution. Learning that the hospital is an unsafe environment, Dominick fights to have his brother freed, even as the incident forces him to examine his lifelong ambivalence toward both his brother and the strange, strained family that made them both what they are.

Dominick believes the key to the family's troubled history lies with his Sicilian grandfather and namesake Domenico, whose convoluted journals reveal a shocking parallel story of twins and mental illness. No matter what secrets the journals hold, the past is forever another country, and Dominick must find a way to make peace with the present by whatever means he can...until he learns that the past is a lot closer than he ever suspected, and that he has the power to make amends for a long-forgotten, shameful crime.

The series stars Mark Ruffalo in a double role (for which he won the Emmy for Outstanding Lead Actor in a Limited Series or Movie in 2020), as well as Melissa Leo, Michael Greyeyes and Juliette Lewis.