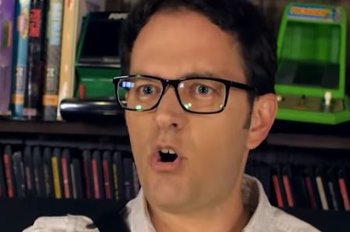 What were they thinking?
Advertisement:

So, it's time to talk about...myself. On this godforsaken website called TV Tropes. More like TV Turd! Come on, I'm a fucking video game reviewer! Get The Nostalgia Critic for this television shit! Oh, all right. But what the hell is that bum doing here instead?

So, I'm the fucking Nerd, and I review shitty games. It's my duty to review dysfunctional games (mostly made by the incarnate of hell, LJN) and warn people from playing this shit. They have several fucking problems, like shitty controls, HORRIBLE music, annoying enemies and putrid graphics. Seriously, WHAT THE FUCK WERE THESE PEOPLE THINKING?!? I'D RATHER PUT MY BALLS IN A CROCODILE'S MOUTH WHILE SHOVING MY HEAD UP A UNICORN'S ASSHOLE!!!!

These tropes are a shitload of fuck: