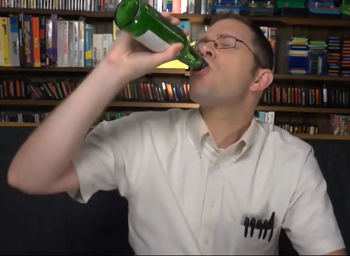 This is what you'll do often, much like he does during a shitty game.
Advertisement:

Drinking game for The Angry Video Game Nerd (Non-alcoholic version unless you like alcohol poisoning):

The drinking game starts after the intro theme song. Otherwise, there's a chance you'll be done before the Nerd even begins the review.

Take a sip every time...