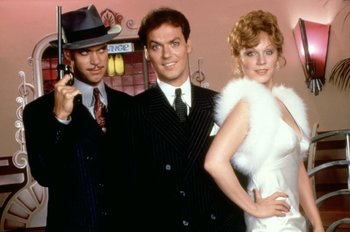 "I got Harlem, Richie. I took care of Harlem, and now Harlem is gonna take care of me. You can believe that."
— Frank Lucas, American Gangster
Advertisement:

There is truth to this, particularly in the birthplace of The Mafia, Sicily. Eventually, the locals of that harried island got tired of being invaded every other week and banded together with the local gangsters. The same goes for Harlem during the Civil Rights Struggle, which saw its share of unfair treatment by police. The Japanese Yakuza tend to be more civilized to their neighbors as well since they tend to operate more openly than Western counterparts and like to preach how they provide "services" to the community (who, in return, owe them money and respect).

This trope is usually set against more villainous politicians or outsiders. Neighbourhood-Friendly Gangsters almost always have standards; refusing to deal hard drugs is a common one. This may include a noble (if warped) sense of family values. May overlap with Anti-Hero Team if they're the heroes of the story.

This trope has some elements of Truth in Television: crime syndicates that wish to survive in a community try to have good public relations, after the philosophy "don't shit where you eat". Many criminal organizations (including the Japanese yakuza, Sicilian Mafia, the Chinese triad societies, and most American street gangs) also have their roots in community self-defense efforts, although they share a strong tendency to degenerate into more euphemistic "protection" among other abuses. Moreover, having an organised crime outfit in your neighborhood tends to help cut down on disorganized crime—the common criminals who might otherwise commit crimes in that neighborhood are too afraid of committing a crime against the wrong person, and paying for it, pissing off people who have every reason to keep the neighborhood off the radar, or simply being made an example of by people who know that unaffiliated criminals getting away with causing trouble in their territory is a bad look, and don't want to give anyone any ideas.