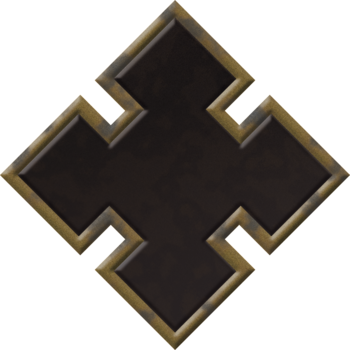 "We can't stop them. We don't know where they come from. We don't know what they want. They don't even seem to want territory. All they do is kill. We can't even begin to negotiate with them, or work out their objectives, because we just don't know the first damn thing about them. That's not an enemy. That's a monster."
— Chief of the COG Defense Staff, General Bardry Salaman describing the Locust

A race of subterranean humanoids that live in the Hollow, a massive network of tunnels beneath the surface of Sera. They use a variety of bio-engineered beasts for transport, construction, and war. The Locust invaded the surface of Sera six weeks after the end of the Pendulum Wars, beginning a war that would result in the death of 99% of the human population. Their motives for this were revealed in Gears of War 3: the Lambent were overwhelming the Locust in the Hollow, and after Adam Fenix failed to find a solution, Queen Myrrah invaded the surface to make a new home for the Locust as they continued their war, not believing that humanity could be trusted. 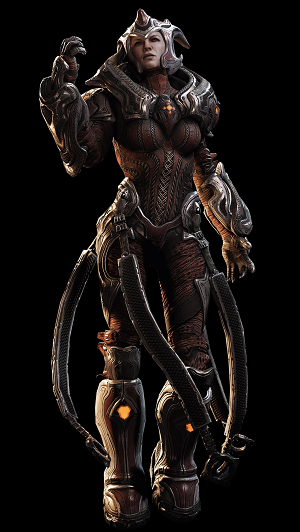 Voiced by: Carolyn Seymour
"The Humans of Sera built a glorious civilization, but Humans are not destined to create. They ultimately did what they do best. Destroy. But this was nothing, compared to a new threat, from below. An enemy that will force Humanity to take their last, inevitable steps, toward extinction."

The leader of the Locust Horde, who outwardly resembles a human woman. Precisely why she looks almost human is not made clear, and neither her motivations for attacking mankind. Gears of War 3 reveals Emergence Day resulted when the Locust realized their Lambent counterparts were becoming active and attacked them, and they had to flee the Hollow before it overwhelmed them. Myrrah led the Locust to attack humanity in order to reach the surface and escape the Lambent.

Gears 5 reveals further details about her past. Turns out she was the daughter of an imulsion miner who contracted rustlung, and she was experimented upon by Niles Samson, who became fascinated by her since she wasn't negatively affected by mutations caused by imulsion (unlike his other test subjects). He submitted her to horrific experiments, but it was only after Niles lied to her regarding the fate of her daughter Reyna that she got fed up with his experiments, and led a rebellion against Niles and his team. Then she fled Niles' lab and moved into the Hollow, becoming queen of the Locust. 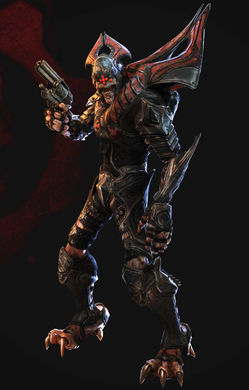 The "conductor" of E-Day, Karn is considered the most dangerous Locust the COG has ever faced by Damon Baird. He serves as the Big Bad of Judgment, during his assault on Halvo Bay. 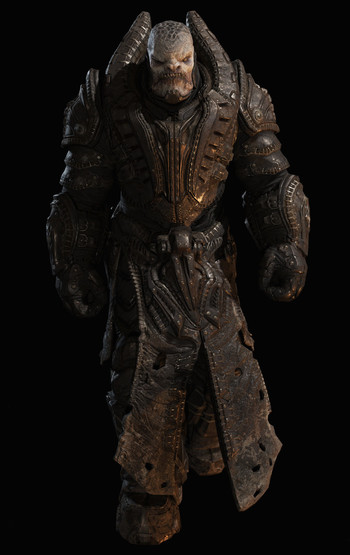 A Locust Drone who worked his way up the ranks in the Locust Horde, RAAM led the Locust army during the Lightmass Offensive and served as the Final Boss of the first game. RAAM returns prominently in the second Gears of War 3 Downloadable Content called RAAM's Shadow, a prequel taking place long before the first game, where he and a few Locust elite infantry place strategic Seeders to ink the sky black over Ilima City for an impending Kryllstorm. 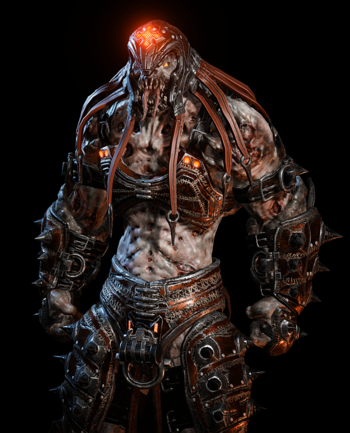 High priest of the Kantus Sect, Skorge took over leading the Locust armies after General RAAM was killed, since only he could communicate with the Riftworm, awakened as a result of the Lightmass bombings by the COG. 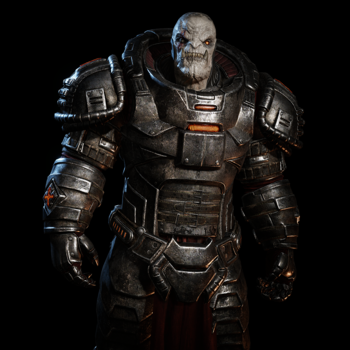 "This could lead us down a path of crisis. We're already stretched thin."

Sraak was the high general of the Locust Horde's armies during the Lambent War, preceding RAAM. He was later humiliatingly demoted to lieutenant shortly before the Locust-Human War after his incompetence was exposed by RAAM to the ruling Locust council. During Emergence Day, Sraak made an attempt on RAAM's life in revenge, but was killed through the coordinated efforts of Theron Guards loyal to RAAM. 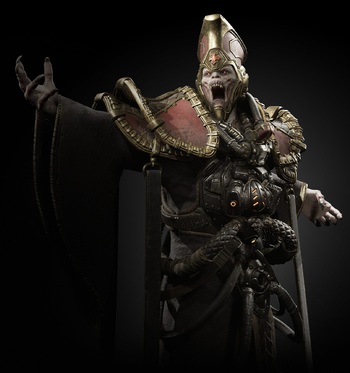 Ukkon was the head scientist of the Locust Horde during the Lambent War. Originally a human, he was infected with Rustlung as a child and transported to the New Hope Research Facility to be studied and treated. Genetic experimentation at New Hope led to his mutation, transforming him into a Sire. However, unlike most Sires, he retained his mental capacity and became a genius. Exposure to Imulsion then granted him the ability of accelerated healing, becoming physically immortal. His genetic knowledge, ingenuity, and history with Myrrah earns him a particularly special place in the Locust even among its other leaders.

Vrol was the High Priest of the Kantus during the Lambent War and Skorge's predecessor. 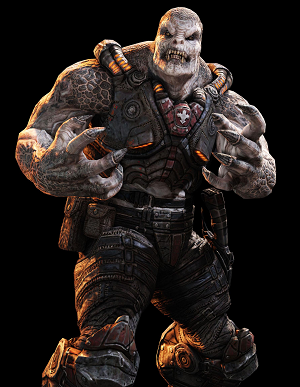 The frontline soldiers of the Locust Horde, the Drones are divided into several ranks depending on their skills: Beast Rider, Grenadier, Sniper, etc. 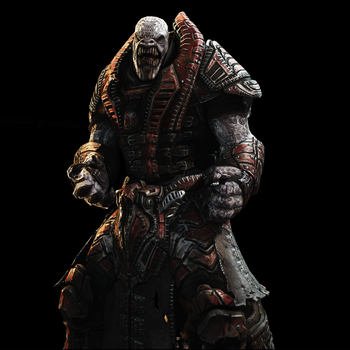 The elite Locust troops, they operated under the command of General RAAM until his death during the Lightmass Offensive, which severely depleted their number. The flooding of the Hollow also dealt them heavy casualties, making them very rare amongst the remnant of the Locust Horde that escaped to the surface. 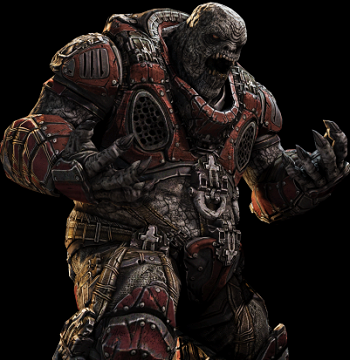 Giant dimwitted Locust who serve as heavy weapons soldiers for the Locust Horde. Boomers use boomshots, Grinders use mulchers, Maulers use explosive flail and boomshield, Butchers use large butcher's knives, Tremors can summon Seeders to the surface, Flamers use scorchers, and Savage Boomers use the digger launcher. 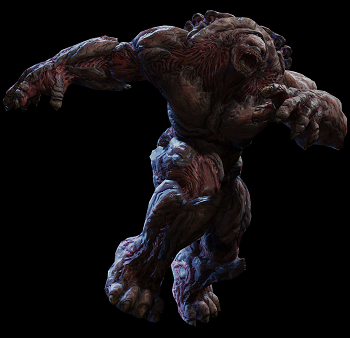 The female Drones. Berserkers are blind and ultra-violent, and are often unleashed into human occupied areas in order to cause as much carnage and casualties as possible. 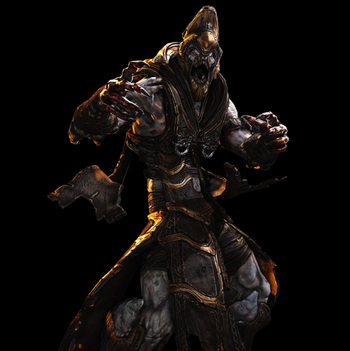 The religious order of the Locust, the Kantus monks operated under High Priest Skorge. They often lead Locust hunting parties, using their abilities to coax out rockworms to be captured and taken for food. Following Skorge's ascension to commander of the Locust armies, they began taking the place of Theron Guards as battlefield commanders. 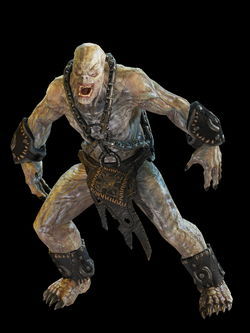 Introduced in Judgment, they are skinny, unarmored Drones who fight with a Breechshot. Although they seem like a fragile target at first, after sustaining some damage, they enrage, toss their gun away, and morph into a more powerful form akin to a Berserker.

The ancestors to the Locust. Sires are basically Lambent Humans dating back to the Pendulum Wars that were studied by humanity within COG's classified New Hope Research Facility to look into why humans were mutating from exposure to Imulsion. Several information leaks and Sire attacks on employees led to COG growing fearful of Imulsion companies abandoning the usage of the power substance, which resulted in the facility's shutdown. The Sire "children" that were already awoken from their test tubes were then sent off to Mount Kadar where they evolved into the Locust seen in the current day. Sires only appear in Gears of War 2 and Gears 5.

The Locust Elite
An elite squadron of Locust warriors comprised of two Mauler Elites and one Theron Elite. They accompanied RAAM during the Battle of Ilima, where they eventually clashed with Zeta Squad in battle. 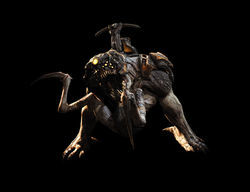 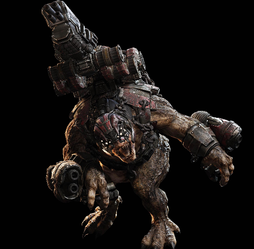 An enormous dinosaur-like creater of the Hollow. Functioning as the Locust's tanks, the Locust fit them with with arm-mounted machine guns and back-mounted rocket launchers, controlled from a pilot's seat located behind the latter. 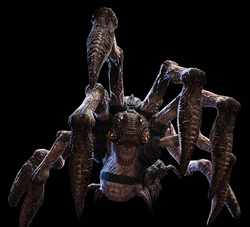 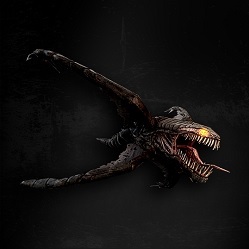 Small Locust fliers that swarm together to become an unstoppable force that shreds people down to their bones in the blink of an eye. They only appear in the first Gears of War due to the Lightmass Bomb destroying their breeding ground.

Giant fish-like monsters that live underwater. May not be tamed by the Locusts as they chuckle and retreat when you get close to their lairs. Anvil Gate confirms that there are more than one, and that they can go Lambent. 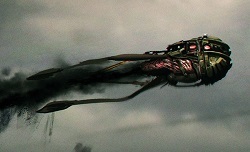 Small organic Locust that Seeders fire at their enemy to act as mortar-fire or anti-air. Their use isn't just restricted to Seeders though as Nemacysts can remain floating in the air to release a noxious ink that messes with COG's radio transmissions. 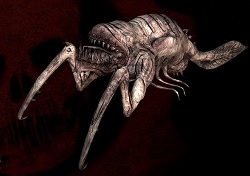 Small bipedal enemies that are only found inside the Riftworm. Nemacytes live within the Riftworm's stomach to help with digestion by attacking anything that might still be alive after getting eaten. They only appear in Gears of War 2. 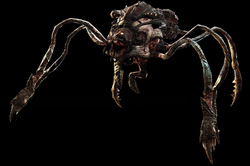 Large, flying squid-like beasts. Usually affixed with mounted guns. Skorge has his own personal Reaver called the Hydra which is larger than the others and has more appendages. It was created by Ukkon, who also managed to create at least one other specimen of the species. 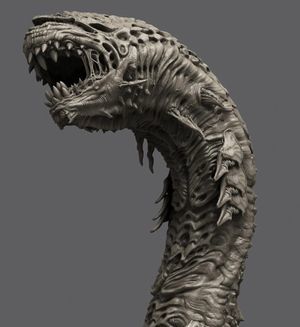 A GIANT WORM! that appears in Gears of War 2, which the Locusts used to sink entire cities. According to Locust myth, there are three of them that carved out the Hollow, and are thus treated as gods by the Locust. 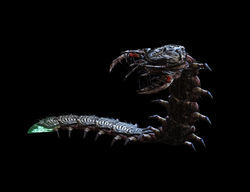 Hollow creatures that can zap Gears with their antenna. 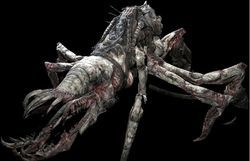 Towering insect-like creatures. Used as artillery/mortar launchers by firing Nemacysts out of their thoraxes.

A Giant Spider seen in Judgment, only the one used as Karn's mount is known.

Huge grasshopper-like creatures (although Cole thinks they look like giant turkeys) introduced in Gears of War 3 strapped to a device that uses their powerful hind legs like a catapult. 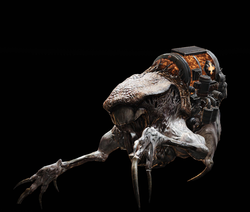 Small and fast creatures found in the Hollow, the Locust strap bombs to them and send them out to act as mobile landmines that can kill Gears and destroy vehicles. 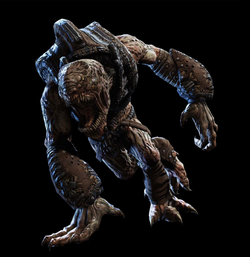 Small monkey-like creatures that have sharp claws. Often found roaming in packs, the Locust release wretches to infiltrate and clear out sections of cities.