A new enemy to humanity that came out of hiding 25 years after the war against the Locust Horde was finally brought to an end. The Locust was thought to have been completely disposed of when Adam Fenix' Neutron Bomb went off when in actuality, this was far from being the case. The corpses left behind by the Locust became wrapped in cocoons that were completely indestructible, which forced the COG to dump said corpses numbering in the thousands off at dumping grounds all across Sera, and locked them away out of sight. As it turns out, the Locust were still very much alive, and used the 25 years that humanity spent in peace evolving into more powerful creatures that Del later dubs as being like a "Swarm." In addition, the areas that were used for dumping grounds end up mutating into large nest-like complexes that become the new staging points for the Swarm. Overall, the Swarm serves as the successors to the Locust Horde as the primary enemies that humanity faces off against starting from Gears of War 4 onward. 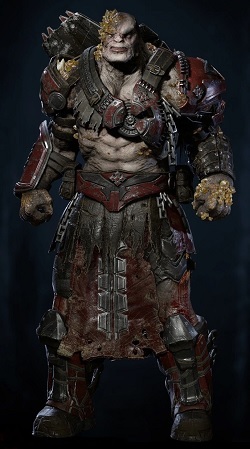 "The path to your mother lies through me!"

A Swarm Scion of some importance that appears in Gears of War 4. The Speaker is the creature personally responsible for leading the attack on Kait's village and kidnapping her mother, Reyna.

The daughter of Myrrah, Reyna's consciousness is preserved in the Swarm Hive Mind. Once Kait severs her connection, the Swarm bring her back... more or less. 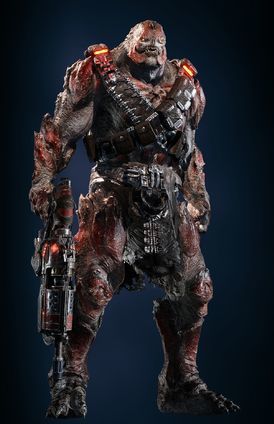 The basic front-line soldiers of the Swarm that serve the same exact purpose as the Locust and Lambent variants that came before them. The Swarm Drones are seen in different ranks depending on what they're skilled at, such as being a Grenadier, Hunter, or Sniper. Drones that recently evolved from Juvies have a fresh look to them known as Imagos, and some Swarm Drones can appear as an elite variant. 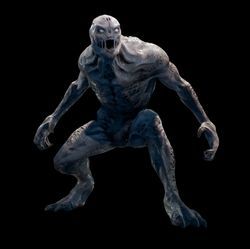 The result of a human's first stage of transformation into creatures for the Swarm. Humans that are captured by Snatchers are put into nest pods where their bodies are forced to go through mutations to eventually become Swarm Drones. However, those that pop out early show themselves off as Juvies, which are immature zombie-like creatures that rush towards their enemy in groups. The function of the Juvies are basically what the Wretches were for the Locust. 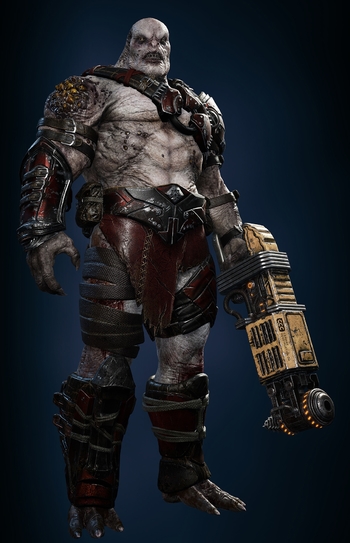 Former Locust that have awakened from their slumber after being incapacitated by Adam Fenix' countermeasure. Unlike the lower-tier Drones and Juvies who were former humans caught by the Snatchers to mutate into new beings for the Swarm, Scions are the evolved forms of the corpses left behind by the Locust. Upon awakening, Scions serve as the commanders of the Swarm army, and lead the Drones and other Swarm creatures in their quest to capture humans and continue repopulating the horde.

A huge, slow-moving, and heavily armored Swarm creature that can a ton of punishment and cause devastating damage up close. They also come with a type of grenade launcher attack in the form of throwing exploding "Cankers" at enemies.

Living Swarm projectiles that Carriers and the Hive Beast tend to throw at enemies. Cankers serve a very similar purpose as the Nemacysts of the Locust where they're shot out of something, and then home in on their target and explode.

A massive Swarm creature that guards the entrance of the Swarm nest at Tollen Dam. With qualities of a Swarm Carrier and Swarm Pouncer on a much grander scale, the Hive Beast served as the Final Boss of Gears of War 4 where it fought against JD's group to keep them from reaching Reyna, who the Swarm took hostage.

Leeches are small worm-like creatures that explode if they get to close to their target. They can also burrow into the bodies of the things they attack, such as humans and machinery. If it's a human, they die, but if it's a robot, such as a DeeBee, the Leech takes possession of it. When Leeches are gathered up and flying around in the air as a massive swarm-like entity, they become known as a Flock that goes about searching for anything to hunt and destroy. Flocks function similar to how the Kryll were for the Locust. 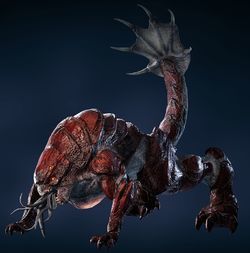 Medium-sized 4-legged creatures that are usually seen hunting in packs of three. While already being tough to take down, the Pouncer's primary means of combat is to jump around the battlefield to try to "pounce" onto the enemy, and use their tails to fire off quills as their ranged attack.

Large 4-legged creatures that got their name from their ability to "snatch" up humans that they then hold within their large pouch-like stomach. Snatchers are what allow the Swarm to increase their numbers by storing the humans they capture into nest pods that turns them into Juvies, and eventually into Swarm Drones. Along with being incredibly tough to take down, Snatchers usually appear in packs of two.

The Swarm's version of the Locust Brumak where they continue to serve as the force's Walking Tank variant. Only the Swarmak now comes with a highly disfigured appearance after going through Swarm mutation. In addition, one of the Swarmaks serves as a mount for the Speaker.

Bastions are infected Guardians that have been taken possession of by Leeches to become part of the Swarm. Their primary usage in the Swarm is to support Scions and Stumps during battle by keeping up a barrier shell around them as long as the Bastion remains active.

Rejects are infected Shepherds that have been taken possession of by Leeches to become part of the Swarm. They function similar to slow-moving zombies that attempt to engage their target in close combat.

Stumps are infected DR-1s that have been taken possession of by Leeches to become part of the Swarm. They function as mobile tripods with the former DR-1's weapon mounted on top.