The Coalition of Ordered Governments 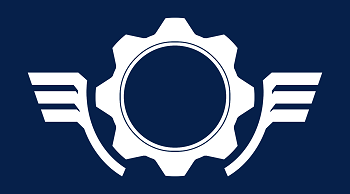 An imperialistic socialist / fascist alliance of nations, the COG warred with the Union of Independent Republics for 80 years during the Pendulum Wars, fighting for control of Imulsion deposits and to advance the governing philosophy of the COG Allfathers. The nation of Tyrus is the center of COG power, with the capital city of Ephyra being the headquarters of the COG military and office of the Chairman. After winning the Pendulum Wars with the Hammer of Dawn, the COG enjoyed six brief weeks of world domination before the Locust emerged.

The backbone of COG society, Gears embody everything the COG should stand for. Due to the 80 year Pendulum Wars, COG society evolved to revolve around the military. In comparison to the COG government, the Gears care less about spreading COG doctrine and Imulsion supplies, and more about ensuring the safety of their countrymen and fellow Gears. 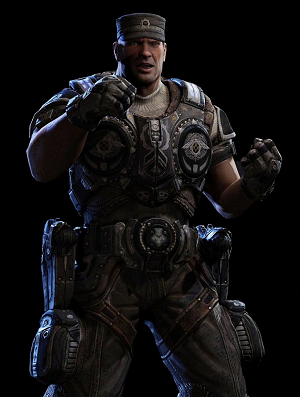 "Guns and bombs don't kill people. Clever scientists who want to build a better method of destruction kill people: lots of them. Most of my Gears couldn't make anything more lethal than a blade or a bow. So you'll forgive me if I think it stinks that my Gears get your "baby-killer" crap and your educated colleagues get research grants. And that's before you start inventing other shit you can't control."

Hoffman is the highest ranking member of the remaining COG army fourteen years after Emergence Day. Hoffman worked his way up from private to become the head of COG Special Forces at the end of the Pendulum Wars. He hated the promotions, worried the higher in rank he got, the worse he would screw up, and was fearful he would no longer be able to fight alongside his men. Hoffman was the one who ordered Marcus out of prison, as the number of Gears were dwindling. He restarted a relationship with Bernadette Mataki after she returned to the COG fifteen years after Emergence Day, and later led a group of survivors at Anvil Gate following the sinking of Jacinto. 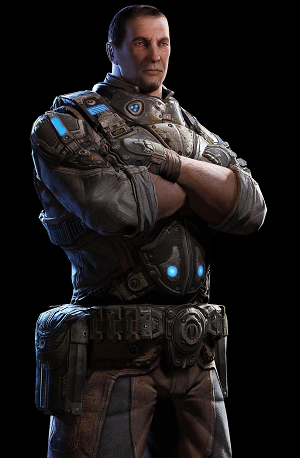 "The Coalition of Ordered Governments still exists, the rule of law still exists, and our social covenants still exist. We may no longer be in a state of war, but we still have a battle ahead to survive and rebuild, and in these difficult days there will be no tolerance of lawlessness and antisocial behavior. Unity defeated the Locust. But disunity will be the certain end of us all."

Prescott is the Chairman of the Coalition of Ordered Governments for the time frame of the games, taking over the position after his predecessor died of a heart attack a year after Emergence Day. He employed ruthless tactics in his efforts to defeat the Locust, including burning a majority of Sera's surface to deny the Locust equipment, killing millions. As things got worse it became evident he hid government secrets even when they would be useful in defeating the Locust, with his reasons for doing so kept ambiguous. 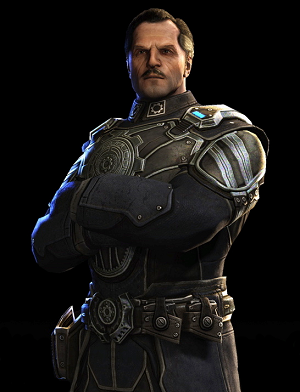 Loomis was the COG officer in charge of defending Halvo Bay not long after Emergence Day. Loomis tried Lt.Damon Baird and Kilo Squad for treason during the middle of the battle after they disobeyed orders and used a secret COG weapon against the Locust.

Walker was a CIC controller during the Evacuation of Ilima, she helped direct Zeta Squad during the battle.

Mathieson is the secondary CIC controller fifteen years after Emergence Day, taking over most of Anya's duties when she switched to the frontlines. He was a rising officer in the COG forces before losing both his legs to a Locust mine.

Parry is the head of the COG Logistics Core, and a friend of Dizzy Wallin.

Dalyell was the Chairman of the COG at the end of the Pendulum Wars. He died of a heart attack one year after Emergence Day, leaving Prescott in charge of the COG.

Hoffman's predecessor as head of the COG armed forces, Salaman presided over the army at the end of the Pendulum Wars and for the first year and a half of the Locust War. However, he could not live with the civilian casualties caused by the Hammer of Dawn, and killed himself. He was actually relocated to Azura with his wife by Prescott to work on long term planning against the Locust while Hoffman carried on the day-to-day fighting.

Reid is an extremely disliked officer in charge of supplies and EOD teams, and one of two officers in line to take over for Hoffman if he dies. 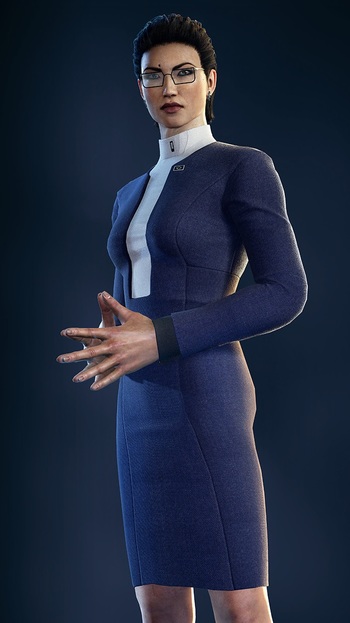 Mina Jinn is the First Minister who headed the newly reformed Coalition of Ordered Government many years after the Locust War. 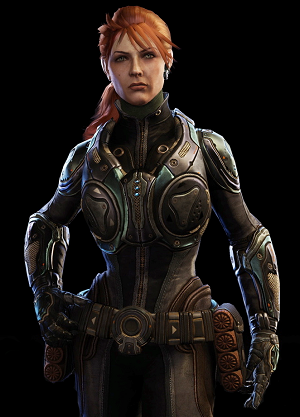 Sofia is a former reporter who objected to COG imperialism, she signed up with the COG army after Emergence Day and was sent to the Onyx Guard Academy in Halvo Bay. During the Locust attack on the city, she was assigned to Kilo Squad and faced charges of treason alongside the rest of the squad during the battle.

Dury is the Captain of the Onyx Guard and one of Prescott's most trusted secret advisors. He does not like some of the things he has to do for Prescott or the secrets, but understands perfectly the need for it all.

Two Gears who become Prescott's bodyguards on Vectes, he brings them into his confidence, telling them everything about Azura and what he has been hiding. They depart the COG with him and join him on Azura, where they become members of the Onyx Guard. When the Locust attack the island, they flee with him to find help in retaking it. 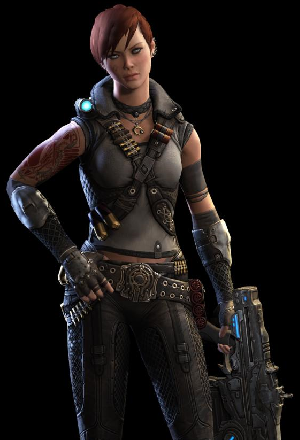 Alex is one of the few frontline female Gears after E-Day. As a child, Alex was sent to a COG "baby farm", where women were artificially inseminated or just plain raped, but she was discovered to be barren after several years of trauma. Alex then got shipped off to boot camp and made into a soldier. She became a sniper and scout, and quickly rose through the ranks. She worked with Delta when they went to the farm where she grew up after a distress signal was detected there. 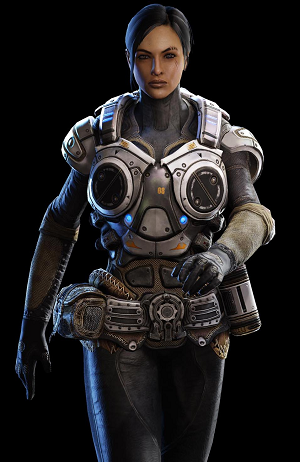 "Every life we save today is something special. It's another chance for someone."

Valera is a member of Zeta Squad and hails from Ilima City, which she helps evacuate nearly a decade after Emergence Day. She has a younger brother who is about to join the COG Army. Alicia appears exclusively in "RAAM's Shadow". 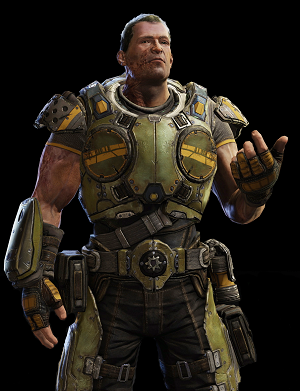 Paduk is a a Gorasni soldier who was rescued from his homeland by the COG after it fell to the Locust. Initially put in prison, the Open Arms Program allowed him to become a Gear to get revenge against the Locust that had destroyed his people. Paduk was assigned to Kilo Squad, and during a battle in Halvo Bay he was tried for treason alongside the rest of his squad.

Pad is a South Islander sniper who fought in the Pendulum Wars, killing over four hundred Indie soldiers. During the Locust War, the death of his best friend and the Hammer of Dawn counterattack pushed him over the edge, and he disappeared without a trace. He showed up again at Anvil Gate during the Lambent Invasion, having gone to live with the Pesanga.

Rossi is the commander of Echo Squad and a tough veteran Gear who really likes to snark at others. He's good friends with Delta-One and a former member of the 26th Royal Tyran Infantry.

Andreson is the commander of Omicron Squad and good friends with Marcus and Bernie. He is killed by Stranded Insurgents on the island of Vectes.

Bai Tak was a Pesanga scout and commando who served alongside Hoffman for fifteen years during the Pendulum Wars. He was killed saving Dom during the Battle of Aspho Fields.

Draper is a Gear officer who commanded Midnight Squad.

Benten is an elderly retired Gear from the Duke of Tollen's Regiment who lives in the town of Pelruan on the island of Vectes.

Michaelson is the head of the COG Navy and a personal friend of Hoffman's from their time working together during the Pendulum Wars. He, Hoffman, and Trescu were often forced to deal with Prescott's under-the-table dealing of secrets and runarounds. After Prescott abandons the remainder of the COG and Hoffman leaves for Anvil Gate, Michaelson commands the recommissioned battleship CNV Sovereign with Delta Squad and COG loyalists.

Gettner is the King Raven pilot of KR Eight-Zero and often works with Delta Squad. She's also the highest-ranking and most combat-experienced pilot left in the COG air force fifteen years after Emergence Day.

Sorotki is a King Raven pilot who flies KR-239 and often works with Delta Squad.

Mitchel is the co-pilot and crew chief for Mel Sorotki.

Barber is the co-pilot and crew chief for Gill Gettner.

Hayman is the chief doctor of the COG medical corps, and one of the biggest bitches ever.

Nevil is a key scientist at the Defense Research Agency, working alongside Adam Fenix on the Hammer of Dawn. After discovering that Adam knew about the Locust before Emergence Day, Nevil was sent to Azura to work on finding a solution to the Lambent. 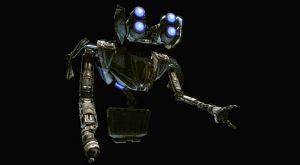 Short for "Jack-of-All-Trades", JACK is a floating robot that assists Delta Squad in getting past locked doors, hacking computers, staying in contact with Mission Control, and shining a flashlight along their path to their objectives.

Mac is Bernie's dog, he is trained to hunt Stranded and fight Lambent.