A form of mutated Locust that were created from too much exposure to Sera's Imulsion. Lambent are usually nicknamed as "glowies" due to the fact that they're always giving off a yellow glow similar to what's seen with the Imulsion substance. Unlike the Locust, things that turn Lambent are much more stronger, violent and give off Imulsion explosions when they're killed. They even use the same weapons, armor and technology as the Locust, which makes them all the more dangerous. Gears of War 2 reveals that the Locust have actually been losing an underground war against the Lambent, which forced the Locust out on "Emergence Day" to try to take the surface from humanity. The situation only gets worse by the time of Gears of War 3 where the Lambent situation reaches a critical point that puts the entire planet in jeopardy. Underground Lambent Stalks being to pop up onto the surface to kill everything that's still living. Adam Fenix later reveals that the Lambent is actually a parasite that lives within the Imulsion, and has been the main cause of the planet dying. 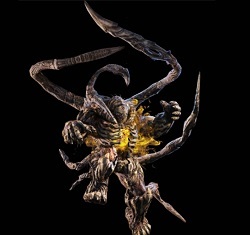 The mutated form of a Berserker. It isn't as invulnerable as it used to be due to the Imulsion infection, but the Lambent variant now has many more methods to attack the enemy other than just trying to charge and rip people to shreds. The Zerker acts as a mid-game boss while Delta Squad are at Anvil Gate.

The mutated form of a Brumak. A Lambent Brumak mutates into a massive and grotesque creature, and is strong enough to be invulnerable to all attacks other than the satellite strikes from the Hammer of Dawn. The Lambent Brumak acts as final boss of Gears of War 2. 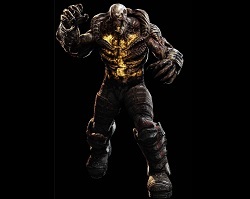 Mutated Drones that act quite similar to their Locust counterparts. They still use a wide variety of weapons as the Lambent's front-line forces. 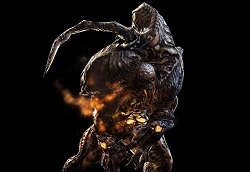 The next Lambent evolution of mutated Locust Drones. Drudges are slow moving, but are powerful and can be deadly at close-range. They also have 3 special mutation abilities that they can use during battle. 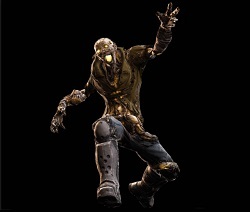 Mutated Humans that have gone Lambent. It was once believed that humanity was immune to the Lambent virus, but the Lightmass Bomb going off at the end of the first Gears of War resulted in a large amount of Imulsion evaporating. This left a deadly vapour in the air that affected humanity to the point of developing a sickness called "Rustlung," which was the opening for humanity to go through the first stages of turning Lambent, such as a having a fever, headache, and muscle pains. Those who were exposed up close to the Imulsion, such as the workers at the Imulsion mining facilities in Mercy and Char, were amongst the first humans to finally turn Lambent, which they became known as the Formers. 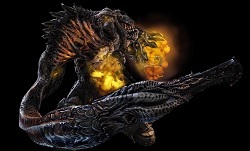 Mutated Boomers that have gone Lambent. Unlike their Locust counterparts, Gunkers perform a lot differently to be considered their own thing. Gunkers are tough to take down, and their methods of attacking is to either fire bombs of Imulsion from long range, or to get in close to perform a massive cleave attack.

The mutated form of a Leviathan. The massive sea-creature being infected by the Lambent allows for it to shoot out Polyps to attack nearby enemies. The Lambent Leviathan acts as the primary enemy of Gears of War 3's first Act when it attacks the Sovereign naval ship that the COG were using to survive on. 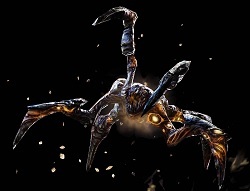 Basic forms of the Lambent that appear as small six-legged crab-like creatures. Polyps are usually seen popping out of the Lambent Stalks, and mutated Drudges. 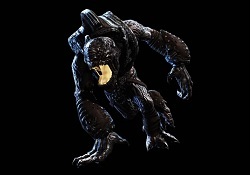 Mutated Wretches that act quite similar to their Locust counterparts where they charge at their enemies to attack at close-range.