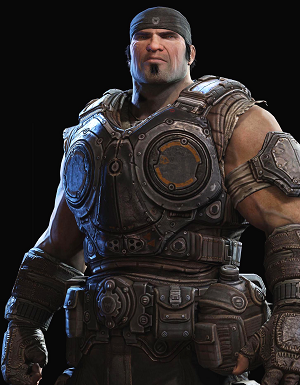 "I got to admit, It's tough to keep going. Everyone I loved is dead. Some call them the lucky ones.. the ones that died on E-day, they never lived to see how much we've lost and how many principles we've compromised. But whenever I doubt what we're fighting for I just look to my squad. I mean maybe it's a good thing we lost everything. It's like a clean slate. We can make the world we always wanted to. Without repeating the same mistakes. I look at guys like Jace and Dom and realize we'll inherit this world. We're the ones who will make Sera beautiful again. That's a world worth fighting for."

Marcus is a quiet, stoic guy, who prefers to do his talking with his gun, and is best friends with Dominic "Dom" Santiago. His best friend had been Dom's older brother Carlos Santiago, who was killed at the Battle of Aspho Fields in the Pendulum Wars. Regarded as the defining hero of the Pendulum Wars, he fought on the frontlines of the Human-Locust War until he abandoned his post in an attempt to save his father Adam Fenix from death, taking with him the targeting locator for the Hammer of Dawn, and costing the COG its capital city of Ephyra. He failed, and was sentenced to prison for his dereliction of duty, being spared only by the fact he was a former war hero. Four years later, Dom breaks him out of prison, and Marcus rejoins the army, being pardoned due to the need for soldiers, as the Locust are inching closer and closer to putting humanity into extinction. 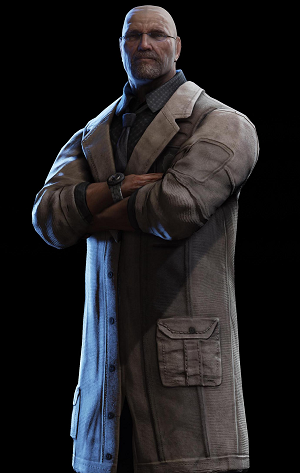 "I rarely see Marcus most days. I just don't know who he is and it's all my fault. I lied to him about what happened to Elaine and the longer I lie, the harder it is to come clean. Kids know when you're lying. Then their trust withers and dies."

Adam is a retired Gear Major turned scientist and the father of Marcus Fenix. Following his retirement, Adam developed weapons for the COG, including finishing the Hammer of Dawn, as the director of the Defense Research Agency. Considered the greatest military scientist on Sera, during the Locust War, he disappeared in the Battle of Ephyra when his son failed to extract him and was assumed killed-in-action. Mysterious recordings of his voice were found in the Locust capital Nexus and a strange radio transmission was heard from him after the Hollow was flooded. He is alive and well on the hidden island of Azura, where Prescott sent him off to after kidnapping him once he learned that Adam knew everything about the Locust and Lambent before Emergence Day even happened.

Marcus' mother, Elain was a developmental biologist, and an expert in morphology. She disappeared when Marcus was five, having gone into the Hollow and discovering the Locust, who killed her. 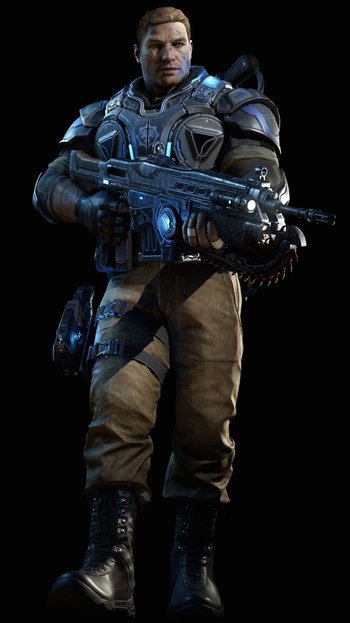 "If we don’t stop these things, everyone within a thousand miles dies."

The son of Marcus and Anya, and the main protagonist of Gears of War 4. A former Gear who went AWOL after being involved in a classified incident, and is now living with the Outsiders. 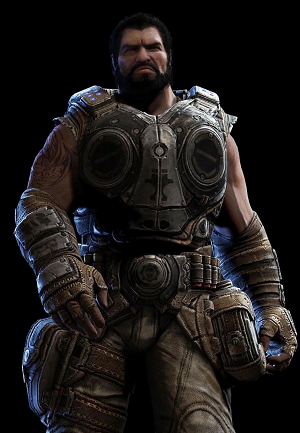 Dom is Marcus' best friend. He was trained as a commando in Hoffman's unit before transferring to the infantry. He lost his brother Carlos during the Pendulum Wars, his parents and two children on Emergence Day, and his wife Maria disappeared several years later after falling into severe depression from losing her family. When Marcus got sent to jail for abandoning his post to save his father, Dom was one of the few peopled who defended him. As the war with the Locust Horde continues, Dom still remains somewhat cheerful and caring throughout the conflict, eventually breaking Marcus out of jail to assist in a major push against the Locust. At the same time, he continues to search for Maria whenever possible. When he found her lobotomized beyond recognition in the Locust Hollow, Dom was forced to euthanise her.

Maria was Dom's wife, who went missing four years after Emergence Day due to her depression over her children’s death. Dom spent the next ten years looking for her, eventually finding her as a lobotomized Locust prisoner in the Hollow, and was forced to put her out of her misery.

Carlos was Dom's older brother and Marcus' best friend. He was the first to join the COG army during the Pendulum Wars. He was extremely reckless, and ended up paying for that at the Battle of Aspho Fields. 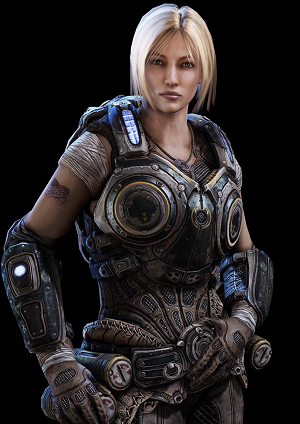 "Oh, I'm fine. That's the scary thing. I want to do it again. I'm not finished. And all this hilarity- I hear it all the time in Control. But now I've done it myself. Tell me it's normal. Tell me I've not got some terrible thing in me waiting to get out and kill and joke about it."

A controller in the CIC, Anya Stroud provides guidance and direction in the first two games, before transferring to the frontlines in the Expanded Universe and the third game. She and Marcus have been in love since hooking up shortly after the battle of Aspho Field, and they finally begin an official relationship on the island of Vectes after Jacinto sinks.

Helena was the mother of Anya, and she was a Major in charge of the COG division that fought at Aspho Fields. She served under Adam Fenix on the Kashkur front of the Pendulum Wars seventeen years before Emergence Day. 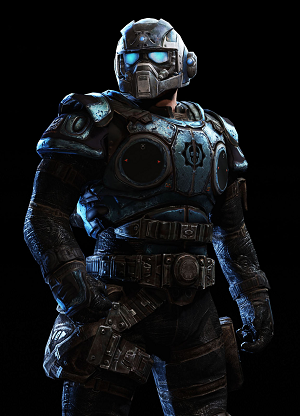 "Something's wrong with this thing! It keeps jamming!"

The second youngest Carmine brother, he first appeared onboard the Raven that picked up Marcus after he was released from prison, and marveled over Marcus' being a legend among the COG. Apparently an already established member of Delta Squad, he gets very little development until he gets killed very early on in the first game. 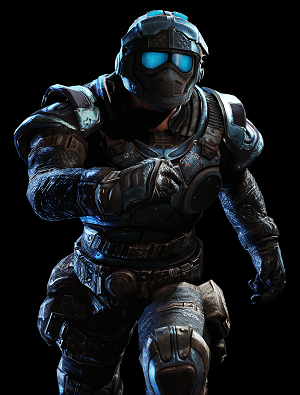 The youngest of the Carmine brothers, he is a fresh recruit sent to Delta Squad to be trained by Marcus (allowing you the option for a Justified Tutorial). He sticks around for a good portion of the game, gradually learning the ropes of being a soldier and being praised by Marcus for how quickly he picked it up. 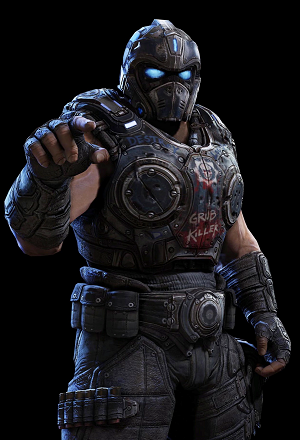 The third Carmine brother, Clayton is the eldest brother to Anthony and Benjamin, and much more muscular and badass. First showing up in the third game, at that point he had been a long established member of Delta Squad and chatted with the others on very friendly terms. 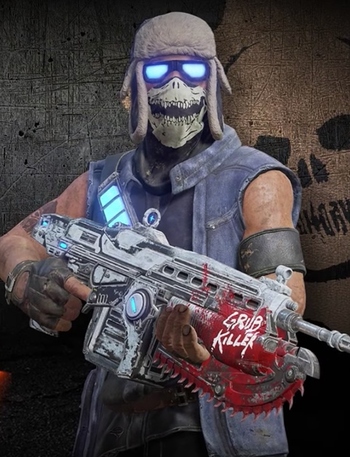 A Carmine who lives in the Outsider village led by Reyna Diaz. 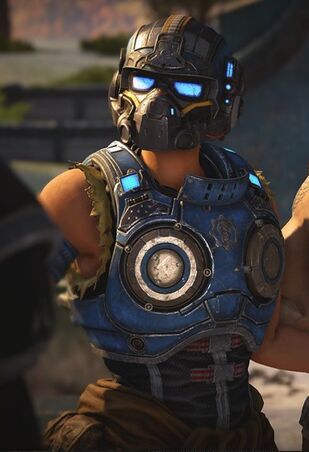 Clayton Carmine's niece, and presumably the daughter of the yet-unseen fourth Carmine brother. She aids JD and Co. when the Swarm attack Settlement 2. Tragically, it's also where she meets her demise.
Sergeant Will Carmine 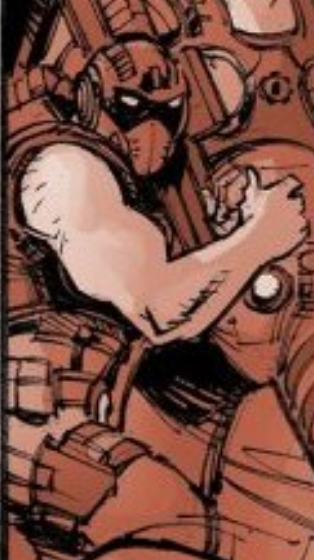 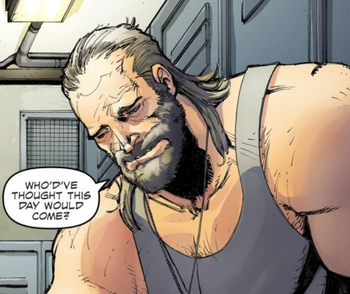 Is he talking about the war finally ending, or a Carmine's face actually being shown?
A Gear who appears in The Rise of RAAM. He fought in, and survived, the Pendulum Wars, only to be killed by the newly promoted Uzil RAAM on Emergence Day. Given his age and that he mentions having no kids, he is presumably an uncle or similar relative of the four Carmine brothers, and is notably the only Carmine whose face is actually shown. One of his squadmates as shown in a photograph appears to have been Gabriel Diaz, Kait's father.