The protagonist Kenshiro, primary allies Bat and Rin, and recurring ally Mamiya from Fist of the North Star. All names are derived from the most recent localization material.

Warning: This series finished serialisation over thirty years ago and is easily accessible in a variety of different media. The entire page contains major, unmarked SPOILERS for the entire series, so beware! 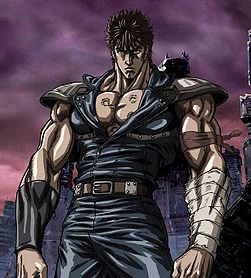 The 64th successor of Hokuto Shinken, Kenshiro was adopted by his master Ryuken as the youngest of four sons alongside Raoh, Toki, and Jagi, all whom vied for succession. After being named as the rightful heir, he wished to settle down with his fiancée Yuria, but his rival Shin abducts her and defeats Kenshiro in combat, engraving the signature seven scars on his chest that form the North Dipper constellation. This sparks Ken's quest to rescue Yuria and eventually become the "Savior of the Century's End" (世紀末救世主; Seikimatsu Kyūseishu). 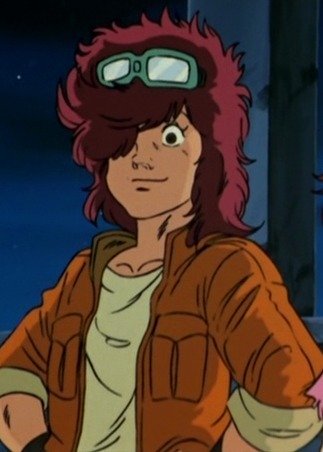 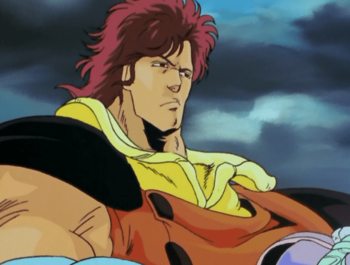 A young boy who decides to leave his home village to fend for himself, Bat was imprisoned in Rin's village for attempting to steal food. While locked in the same cell, he comes across the 64th successor of Hokuto Shinken Kenshiro, who breaks out to fight Zeed. After witnessing his skills, Bat follows Kenshiro as his self-appointed sidekick, hoping to use Kenshiro as a tool for his own self-benefit, but after the death of his adoptive mother Toyo back in his village, Bat slowly matures, upon witnessing the hardships of Kenshiro and his new friends and rivals. Following the Time Skip, Bat has grown Older and Wiser and is co-leader of the new "Hokuto Army" with Rin, a resistance group aimed at bringing down the tyrannical reign of the Celestial Emperor. Although Bat is not a true martial artist, he has rudimentary skills, alongside a limited knowledge of Hokuto Shinken from his travels with Kenshiro.

In the final arc of the series, Bat forgoes his love for Rin so she can be with Kenshiro. To that end, he presses Rin's pressure points to induce Identity Amnesia, including reuniting her with a similarly amnesiac Kenshiro. Fate would force him to pose as the Hokuto Shinken successor in order to fight Bolge, a blind thug with a dangerous vendetta for Kenshiro. Unfortunately, Bat is captured, tortured and multilated by Bolge, doing his best to leave an impersonation of Kenshiro, hoping that if he dies, Bolge will stay away from his friend for good. However, the amnesiac Kenshiro arrives to save him, until Bat's screams trigger the martial artist's memories, who is so moved by his sacrifice for him that Kenshiro defeats Bolge easily. Unfortunately, Bat is mortally wounded, yet urges Rin, who too has regained her memories from Bat's heroics, to stay with Kenshiro. Rin decides to stay behind and guard Bat's tomb, only to discover that Kenshiro managed to save Bat's life by manipulating his pressure points. The story of Fist of the North Star ends with Rin tearfully embracing a rejuvenated, yet still unconscious Bat. 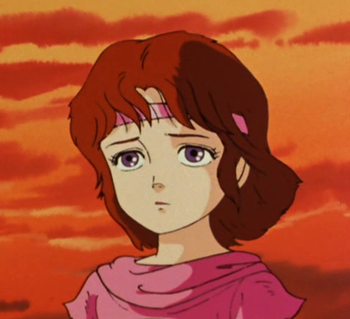 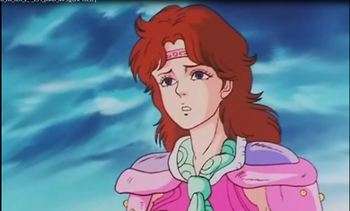 A young mute girl who was traumatized after witnessing the death of her family at the hands of bandits, Rin befriends Kenshiro when he wanders into her village and captured for being suspicious. Offering him water, he helps restore her voice by using one of her pressure points. Upon being rescued from Zeed, Rin begins to follow him through the wasteland and becomes one of his loyal traveling companions. Years after Raoh's defeat, she forms and co-leads the Hokuto Army with Bat as they fight off the corrupt army of the Celestial Emperor.

Rin is actually the younger twin sister of Lui, the Celestial Empress. After they were born, Falco of Gento Kōken was ordered by Viceroy Jakoh to get rid of one of the twins, as two successors to the throne was unallowed. However, Falco could not bring himself to kill a baby, thus left her in secret care by his aunt and uncle. After Lui was rescued by Kenshiro and his companions from Jakoh, his son Jask kidnaps Rin and takes her to the Land of Shura to exact revenge, only for Rin to be tossed around by the warrior Shachi to goad Kenshiro into fighting Kaioh and his Hokuto Ryūken brothers. Before the final battle between Kaioh and Kenshiro, Kaioh presses Lin's pressure point that blinds her and erases her memories: the moment she opens her eyes, she will fall in love with the first person she sees. Bat, who has arrived in the Land of Shura to help, insists that Rin be the one to see Kenshiro, but the successor of Hokuto Shinken believes Rin is destined to be with Bat. However, Bat would force Rin back into amnesia so she can reunite with Kenshiro. The final arc in the series is resolved when Rin regains her memories and chooses to be with Bat.

"I gave up being a woman! What you see before you is not a woman, but merely Mamiya, the warrior who must defend her village!"

A female resistance leader whose village is being assaulted by the Fang Clan, Mamiya has limited skills in martial arts, and makes use of weapons like a pair of bladed yo-yos, combat needles and a crossbow. She bears a passing resemblance to Kenshiro's fiancée, Yuria. After her younger brother Kou is murdered by the savages, she recruits Kenshiro and the vagabond Rei to guard the village, but they instead wipe out the Fang Clan, after Rei discovers they are holding his younger sister Airi hostage. She accompanies Kenshiro and Rei for several arcs of the story.

Like Yuria, Mamiya gains a growing concern for the brooding Kenshiro, though he waves off attempts of affection from her; instead, Rei slowly develops feelings for her. Unfortunately, because of her past shame, she cannot express her love to him in return, thus Rei uses his final days of life to challenge and defeat his old rival Juda, the one who gave Mamiya her psychological scars. Moved by his sacrifice on her behalf, Mamiya re-embraces womanhood, renouncing her life as a warrior.

She later reappears in the Celestial Emperor and Bolge arcs, making her the only one of Kenshiro's allies other than Bat and Lin to appear in all three major parts of the manga.