Introduced in the original Fist of the North Star

"There is no use fighting. You're already dead." 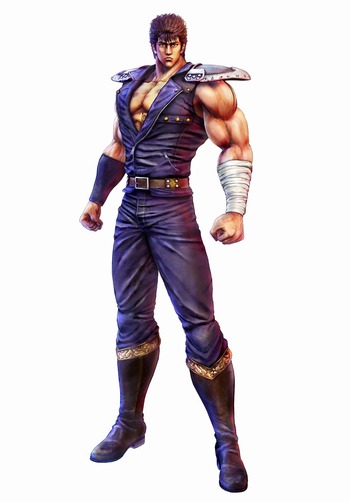 The Man, The Myth and The Legend himself.

The Savior of the Century's End. The Man with the Seven Scars. The true successor of Hokuto Shinken, an ancient assassination art passed down for 1800 years and the protagonist of the game. He searches for Yuria, helping those who cannot help themselves and blowing up every bad guy he comes across, eventually ending up in Eden and becoming entangled in its own problems.

Kenshiro: Take two and call me in the morning.

Kenshiro’s fiancee. She was traveling with Kenshiro in search of somewhere to live peacefully but was kidnapped by Shin. Kenshiro exacted his revenge against Shin and was expected to be reunited with Yuria. However, Shin tells him of Yuria’s death. She was said to have died, but...

"The strong can take what they want...so I shall take Yuria!"

Successor of the Nanto Seiken and Nanto Koshuken martial arts styles. The former is said to be the opposite of Hokuto Shinken. He kidnaps Kenshiro’s fiancee Yuria. At that time, he gave Kenshiro seven scars on his chest. He dies in a rematch against Kenshiro.

"The time has come for me to take Yuria."

The Conqueror of Century’s End and self-titled "King of Fists", he is the oldest of the four Hokuto siblings and Toki's elder blood brother. He uses the Hokuto Shinken martial arts style for his own military rule, and tries to bring unity to the troubled times through violence.

"It is the still water that quells the raging stream."

A fellow student who studied the Hokuto Shinken martial arts style alongside Kenshiro from a young age. He has heart, technique, and physique, and in all was an excellent fighter, but because he was exposed to the “ashes of death” during the final war, he suffered from an incurable disease and gave up on the path of succession. After that, he tried to put Hokuto Shinken to use as a means of medical treatment.

One of Kenshiro’s brothers who studied Hokuto Shinken. He is envious that Kenshiro was selected as the successor of the Hokuto Shinken fighting style, and dislikes the existence of a younger brother superior to an older brother. He wears a strange helmet and has seven scars on his chest like Kenshiro. He is an unpredictable man with madness in his eyes.

"I won't let you escape justice!"

A Nanto Suichiouken user said to be the most excellent in Nanto Seiken Hyakuhachi-ha. He is searching for his younger sister, Airi, who was kidnapped by a man with seven scars on his chest. He hears of certain plausible information, and visits Eden.

"Those who defy the Holy Emperor must die. Die, all for me!"

A man who calls himself “Emperor,” he is one of the characters who reigns supreme in these turbulent times. He is the sole successor of the Nanto Houhouken martial arts style, and the strongest Nanto Seiken user. His excessive pride, which looks down on other warriors as lesser, seems to be come not only from his combat ability, but also from a big secret he holds.

A young boy who follows Kenshiro on his journeys, confident that sticking by the Hokuto Shinken master's side will allow him to live an easy life free from danger and never wanting for food. What he lacks in fighting skills, he makes up for in street smarts and technical know-how, using his cunning to help himself and Kenshiro make money while also maintaining his buggy as Kenshiro's personal mechanic.

A young girl who was traumatized by the death of her parents at the hands of raiders, rendering her unable to speak. Her life was changed for the better by Kenshiro, who not only saved her from murderous raiders, but restored her voice with Hokuto Shinken. Forever thankful, she follows Kenshiro through the wastes, hoping to repay his kindness.

Eden's resident doctor, who seems to know a lot more than he lets on. He helps Kenshiro in the early goings of his journey to find Yuria.

A man who runs a prison called Cassandra, where it is said that once you’re in, there is no getting out alive. The legendary “Impregnable Cassandra” is accomplished by this man’s overwhelming power.

A massive man standing ten times as tall as the average human. He is the final opponent for the victor of the Gladiator Games to fight; only those who can best this reincarnation of a demon can gain their freedom and a boon from Eden's ruler.

Introduced in the game

"From now on, you are a citizen of Eden. I hope you find what you seek."

The daughter of the founder of Eden, the “City of Miracles,” and its current ruler. In order to become a fine ruler like her father, she listens to the voices of the people every day, and drafts and implements various policies to improve the city. Kenshiro, who hears that Yuria headed towards Eden, goes to visit the Eden ruled by Xsana, but…

"If there's one thing I hate, it's a goddamn martial artist." 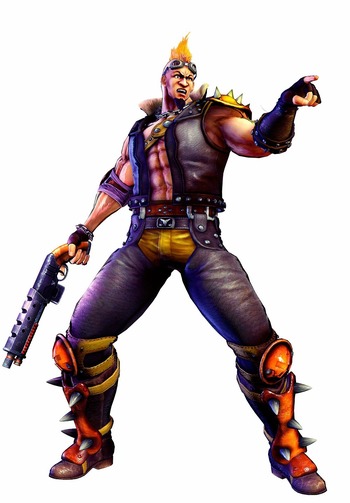 Commanding officer of Eden's Watch. But you probably couldn't tell that by just looking at him.

Commanding officer of Eden's Watch. Upon seeing Hokuto Shinken user Kenshiro’s overwhelming strength, he deemed him to be a monster and immediately imprisoned him in the Eden dungeon. While he does not trust Kenshiro at first, he later opens up to Kenshiro and will eventually become a partner-like character.

The bewitching lady who controls Eden’s nightlife, managing its Nightclub and Colosseum battles. Behind her sassy and bold demeanor, she has a keenly intelligent mind and a knack for business. The people of Eden have come to rely on her, and Xsana trusts Lyra to handle all the city’s financial matters.

The founder of Eden who discovered Sphere City. He achieved frequent feats in his lifetime, building up Eden in a single generation, putting together the walls and Garrison, and so on, but died suddenly several years ago. It seems that even now he is worshiped in Eden as a hero. He was thought to be killed by Xsana herself in revenge after she saw her kill his wife/her mother (it's a long complicated story), but actually survived and now observes his people and his daughter from afar. But if he needs a much closer look, he slips into his "Kyo-Oh" persona.

Isuka (Unmarked Spoilers)
A lieutenant in the Eden Watch who seeks revenge against a mass murderer named "The Ripper". He asks for Ken's help to defeat bounties in exchange for money.
Eden Committee Chairman
A committee chairman who abhors violence and attempts to convince Kenshiro to Turn the Other Cheek, with little success.

Hina
A new hostess Ken saved from thugs harassing her. She is the girl whom Ken can get a job at the Cabaret Club.
Emma
A sexy hostess from the casino Ken recruits when Hina suggested he find more to have for the nightclub.
Liz
An elegant hostess Ken finds praying for the soul of a lost love. She needs to be convinced to live for her lost love who sacrificed himself to save her.
Bright
A power hostess who initially has Hina kidnapped because she can't stand girls who are beautiful as it only reminds her of her own self-loathing appearance as a transwoman. 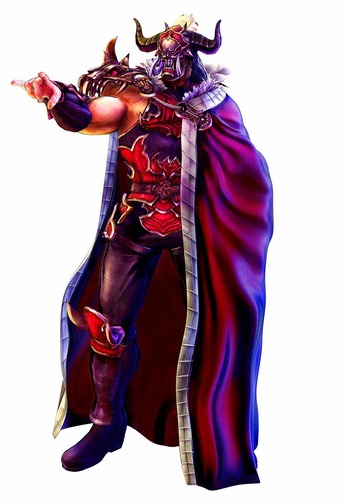 Immortan Joe if he was an Evil Superpowered Martial Artist.

A man with great influence in this troubled world, who took in bandits one after the next to put together his “Army of Ruin.” He is a mysterious kenpo user who is persistent on Eden and attacks it regularly, making him most feared by its people. There's more to it than what he appears to be, however... 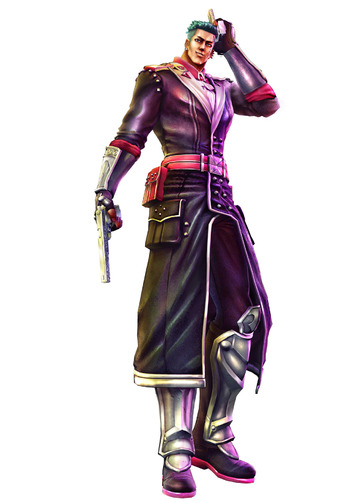 No. 2 of the Army of Ruin, just below Kyo-Oh himself. Contrary to his light voice, he has a cruel and inhuman personality. He uses pistols, which are of value in this age, and has mastered a taijustu that the average swordsman stands no chance against.

Amon
Everyone's favourite assassin from the Yakuza series, reincarnated in the wastelands of the post-apocalyptic world as part of a secluded family to challenge them to a fight. This Amon sought to challenge the invincibility of Hokuto Shinken and to prove that his family is the greatest power in the assassin's side of the martial art spectrum.