Animation / The Legend of Lucky Pie 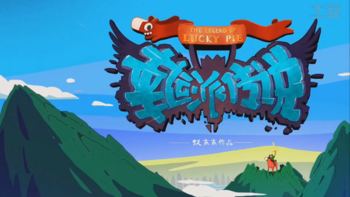 The Legend of Lucky Pie is an independent, Patreon-funded Chinese Mockbuster of Adventure Time. It has fluid animation, simple designs, a laid-back color scheme and folk theme song and follows the adventures of Finn and Jake Expies, Ah-Pie and Lucky, one being an owl-like boy and a miniature, orange-red pony with a long snout (that resembles Pokey from Gumby), respectively.

The characters often have Black Bead Eyes, like most of the Adventure Time cast and the color palette is similar. The color scheme is relaxed and almost pastel, except for the neon-orange horse Lucky. Ah-Pie is fiery in personality like Finn the human but humble around the presence of girls. Ah-Pie is shy around the mermaids, as Finn is around Princess Bubblegum. Lucky is also quick to spring into action around the eel monster, like the tenacious Finn. Ah-Pie, however, has wider, yellow eyes like an actual owl. He also lacks a hat, instead having a feathery head.

The Legend of Lucky Pie provides examples of: