This is the Character Sheet for the Teletoon superhero series, Atomic Puppet. It is primarily based on the character list used by the show's official website. 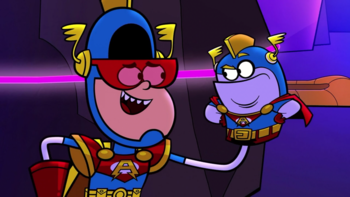 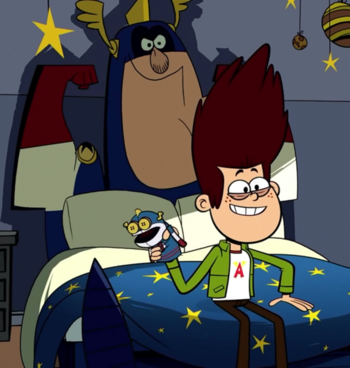 Through all the years Joey spent with his nose buried in comics, never in his wildest dreams did he think one day he'd actually get to be a superhero! But when his idol Captain Atomic is transformed into a puppet, Joey discovers he can reactivate the puppet's superpowers by placing him on his fist. Together, Joey and AP form Mega City's new crimefighting duo Atomic Puppet, and Joey proves to his idol that whenever villainy rears its ugly head, he can count on him to be more than just a helping hand. 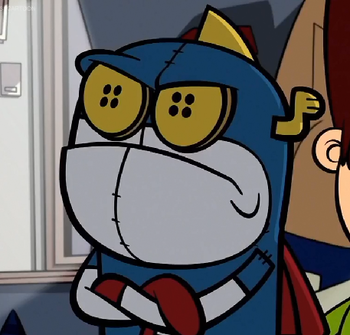 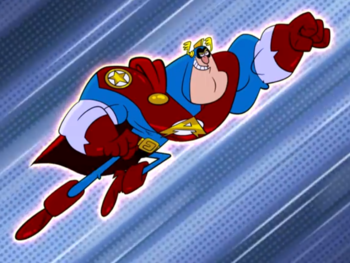 Once Mega City's legendary hero, now just a powerless, living puppet, AP still has all the ego and swagger of Captain Atomic, but is completely dependent on Joey to access his powers. After a lifetime of being able to handle every situation with his brute strength or endless charm, AP now struggles with the idea that he needs Joey's help in order to be the hero the city needs. If AP can figure out a way to swallow his pride long enough, he'll see that Atomic Puppet has a chance to be the greatest superhero Mega City has ever known! 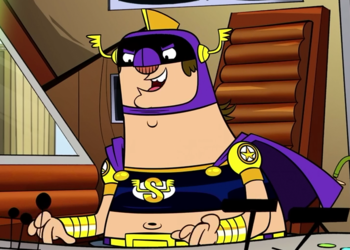 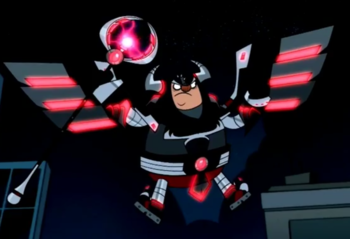 Captain Atomic’s former sidekick. Bitter and bruised over his failed coup to control Captain Atomic, Mookie is fueled by his lust for heroic stardom. He’s tired of living in another hero’s shadow (not to mention his mom’s basement) and he won’t rest until the citizens of Mega City worship him as their one true hero: Sergeant Subatomic, the Nuclear Boy! 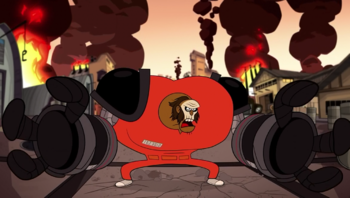 Once Captain Atomic's strongest rival, now Atomic Puppet's most dangerous foe. Professor Tite-Gripp used his super-genius I.Q. to build powerful, mechanical fists to crush his opponents. Unfortunately, his genius I.Q. doesn't always translate to streets smarts, giving Atomic Puppet the 'in' they need to show Tite-Gripp that it takes a lot more than a couple of big metal mitts to snatch Mega City's control from their grasp. 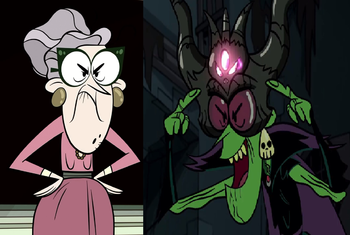 Ms. Erlenmeyer was a cranky science teacher, who felt she had wasted her life away teaching little brats who'd rather goof off and cause trouble than listen to what she had to say. As AP tried to trick Erlenmeyer into letting Joey out of his detention sentence, the situation between Erlenmeyer and Joey grew more intense as they were both pushed to the edge of sanity. By the time AP confessed, it was too late! Ms. Erlenmeyer had unlocked her inner supervillain and ascended into a portal into another dimension. She had finally found her true purpose in life...to destroy Joey Felt! 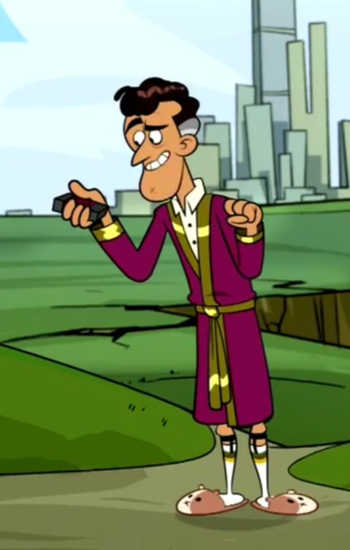 Sure Mega City's eccentric billionaire Rudolph Mintenberg is annoying and obnoxious, but that's the kind of thing you can get away with when you're mega rich! In a perfect world, Mintenberg would be happy living a lavish life overlooking Mega City from his multi-million dollar hilltop compound, but he's bored with that. In fact, you'd have a hard time finding something that doesn't bore him! Unfortunately, the only thing that seems to keep him entertained is concocting various havoc-causing gadgets and experiments that force Atomic Puppet to come and save the day. Of course, that's until he gets bored with that too... 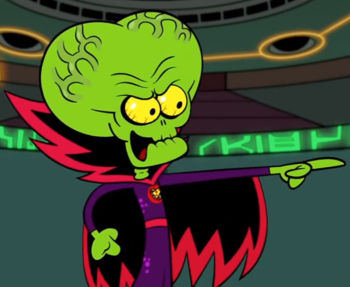 When news of Captain Atomic's disappearance rippled across the galaxy, renowned alien space commander Zorp, assembled his crew to travel to Earth and brainwash the citizens of Mega City with one goal in mind...to capture the citizens and serve them at the Intergalactic Potluck. Instead, Zorp found out the hard way that the city had a new hero and Atomic Puppet sent him back to his galaxy to lick his wounds. Beaten and embarrassed, Zorp is determined to prove he can not only beat Atomic Puppet, but serve them on a silver platter as the main course! 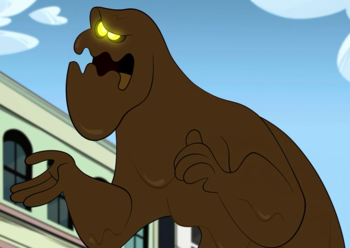 The news of Captain Atomic's disappearance has led to the return of one of his toughest foes, the mighty Mudman (not to be confused with Dirtbag, that's his cousin). Mudman has the ability to not only shapeshift, but to merge with new hosts, taking control of their bodies in the process. His goal is to eliminate Atomic Puppet, take control of Mega City, and prove to any hero in the galaxy that he's the stain of justice that's impossible to get out. 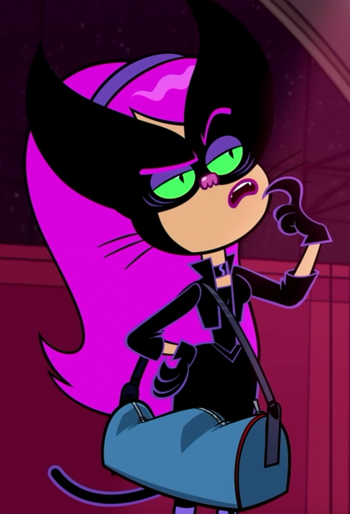 A deceptive and stealthy "cat burglar", Naughty Kitty prowls through the shadows of Mega City in search of the rarest and most luxurious feline breeds to call her own. Unlike some of Atomic Puppet's other more obnoxious and abrasive villains, Naughty Kitty stealthily plans her attacks instead of bursting into action looking for a fight. Be warned, she's not to be taken lightly, once her back is up she's not afraid to use one of her nine lives to exact revenge. 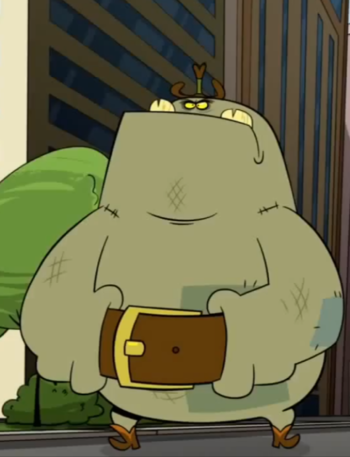 He's not the biggest or strongest villain Mega City has ever seen, but no one fights as dirty as Mudman's cousin, Dirtbag. When this sack of filth rides into town on his giant maggot, he's got only one goal; to turn Mega City into a pig pen so dirty not even his hogs back home would want to roll around in it! 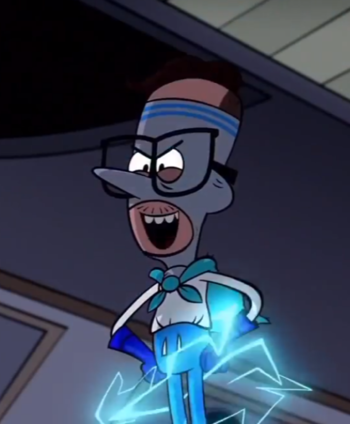 When your only superpower is the ability to steal other powers, people tend not to want to be around you. Such is life for Absorbo Lad, a wannabe superhero who grew tired of being excluded from the "superhero" side and has turned "evildoer" with plans to absorb the powers of the Justice Alliance. Once their powers course through his veins, he will prove once and for all that without their powers, the Justice Alliance is no more a hero than anyone else. 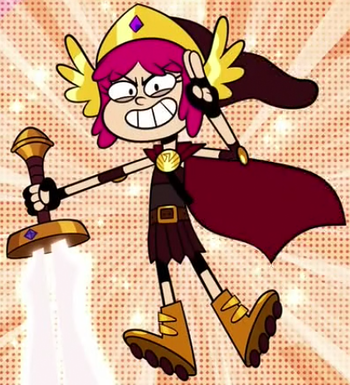 Pauline is possibly the only person who knows more inane superhero minutiae than her friend Joey and it drives him insane! In fairness, Pauline's comic knowledge is in her DNA; her uncle owns the local comic shop and she has been raised on superhero mythology since she was a tiny know-it-all. Pauline is self-assured, quick-witted, and impulsive. She loves to taunt “the puppet” and takes great pride in pushing his buttons. Pauline figured out Joey and AP’s secret early on...but promised to keep it a secret as long as the guys involve her. 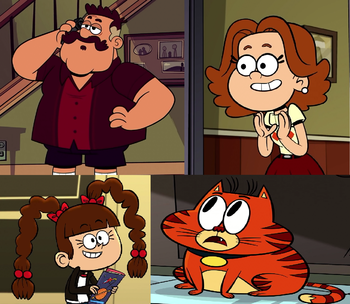 Phil, Vivian, Abbie, and of course Bubbles the family cat, each have their own unique relationship with Joey.

Phil is Joey's rugged, life advice-spewing father, always concerned that his son would rather play with a sock puppet than pull up his bootstraps and take on the world.

Vivian on the other hand is Joey's sweet, hug-fueled mom, worried that her little "Jo-Jo Bear" is going to rush out into the world and get gobbled up by the scary dangers that are out there.

Last but certainly not least is Bubbles, Phil's pride and joy and Joey's only competition for the #2 male in the house. Joey and Bubbles get along great, it's AP who's convinced that Bubbles is secretly an undercover supervillain named "Disastro" who has plans to take out Atomic Puppet from the inside!

Each member of the family might differ in how they interact with Joey, but what they all have in common is that none of them have any idea the kind of superheroic life Joey lives when he leaves the house...or that he's the reason the roof always seems to need repairing! 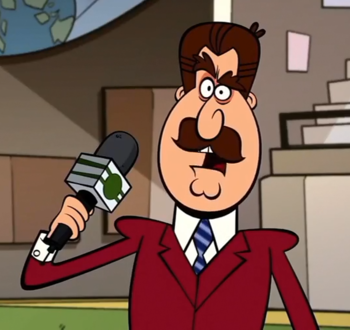 Rex made a career out of covering Captain Atomic's over-the-top heroics. Every night he was guaranteed a top story that would blow his viewers' socks off! Now without Captain Atomic to cover, Rex has been reduced to covering every small story he can get his hands on and is counting on Atomic Puppet to be the hero he needs to cement his spot as Mega City's #1 newsman. 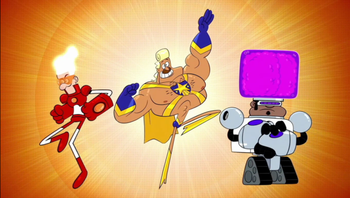 An alliance of the galaxy's fiercest defenders, sworn to bring justice to evildoers and protect the galaxy from villainy. The alliance consists of...

Commander Cavalier, a bronzed beefcake who in the absence of Captain Atomic has taken the reins as leader of the alliance. When forced into battle, Cavalier is known to crush his opponents with his brutish strength and disintegrate injustice with his scorching heat vision. His only known weakness? Being dazzled by his own reflection.

Crimson Beacon, a silent defender of justice and Cavalier's second-in-command. Using his energy spheres, Crimson Beacon has the ability to conjure an infinite amount of tools to help defend the galaxy.

Robo-Ron, the beatboxing brains of the operation and engineer of the Justice Alliance starship. Robo-Ron may not bring much to the table in terms of superheroics but his responsibilities run deep as the main strategist of the Justice Alliance's galactic travels. He's also the architect of any technology they may need along the way.

Missing from the ranks is their former leader Captain Atomic. In the wake of being transformed into a puppet, Captain Atomic went into hiding when he feared his former teammates would mock his new condition. 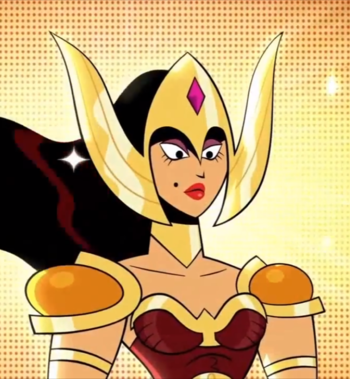 A legendary warrior with lightning quick reflexes, Princess War Tickle used to fight alongside Captain Atomic, frequently leaving him in awe of her raw power. She can often be seen charging into hordes of enemies wielding a giant war axe or broadsword. She can open portals connecting Earth and her home in the Everrealm. She is a celestial guardian, a protector of dimensions. She currently defends the multi-realms. 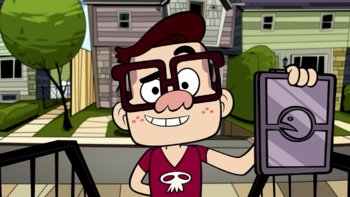 Every neighborhood's got one; the nosy kid who pries around, asks too many questions, and lingers too long to try and nab any morsel of information he can use against you. Warren knows everything about everyone on his block, except for Joey Felt, who he's pretty certain is hiding something...and he plans to find out what!

The Mayor of Mega City 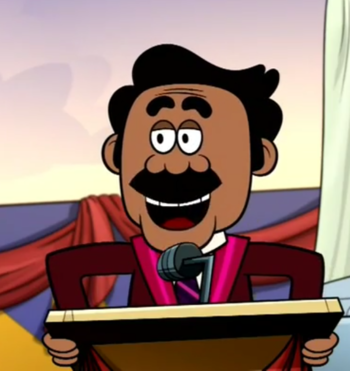 The Mayor loves that the citizens of Mega City feel as safe and secure as they do. What he doesn't love is the cost that comes with achieving that. After all, he's the one on the hook for the bills racked up by all the smashing and crashing in the struggle between superheroes and supervillains, but he never gets any credit! Sure the superheroes do the fighting, but what about the guy who figures out how to pay for it? The Mayor is confident there's a better way to protect the city, whether it's the police stepping up their game or him finding a more delicate hero, he's only going to tolerate Atomic Puppet until he can find a way to replace them. 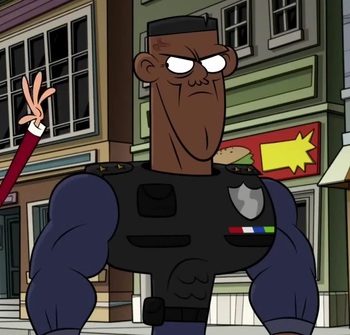 Mega City's new police chief doesn't care for superheroes or the criminal element they attract. Kevlar isn't old school. He's an ex-special ops commando who's all about the tech and making the police department self-sufficient. Gone are the days when trumped-up superheroes do the police department's job. He wants to rid the city of all traces of Captain Atomic, Mookie, and Atomic Puppet and prove once and for all his police force is the only protection Mega City needs.