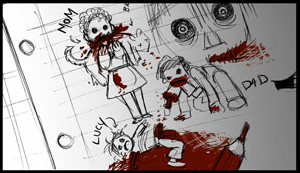 The combination of a disturbing image rendered in a crude, childlike style is a powerfully scary one in and of itself, but just as unsettling is the window onto a child's view of sex/violence/Cthulhu that it gives us. The idea of innocence being exposed to things it finds frightening, or things it can't understand, is a classic way to play off Adult Fear and at the same time deliver a bucketload of Nightmare Fuel rendered in red crayon.

It gets extra points if the suburban mom decides to hang it on the fridge rather than call a child psychologist or an exorcist.

If a Creepy Child draws pictures, they will be this trope. If it's the Monster of the Week the child has been drawing, expect the Nightmare Fuel Coloring Book to come in handy when the heroes come along - after all, now they've got a wall full of pictures of their enemy.