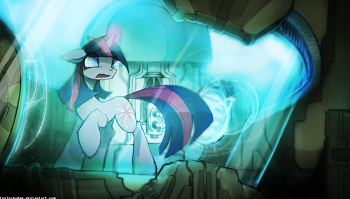 I don't think you're in Ponyville anymore, Twilight.
Advertisement:

by Arad is a My Little Pony: Friendship Is Magic/XCOM: Enemy Unknown and XCOM: Enemy Within (yes, really) crossover fanfic.

Celestia releases Discord from stone and asks the Mane Six to try and reform him. Discord agrees to be reformed, but on one condition, unlike canon: Twilight has to survive a world at war with an existential threat, a world under alien attack, a world facing an... Enemy Unknown. Will she be able to find her way home, or will the other side's paranoia prove too much for her?

. A "trailer" takes up the final chapter of the first story. The war has come to Equestria, with an intensity the aliens have not demonstrated against Earth yet. But those are just the beginning of XCOM's new problems...

, which crosses over the universes of Stardust and Viking ZX's The Dusk Guard Saga, has been released. Word of God is that whilst Fortitude Amicitia will be canon to Mente Materia, it will not be canon for Dusk Guard. Fortitude content has its own section.

, has also been released. It covers what happened to Twilight after she was successfully returned to Equestria at the end of Stardust.

Also has a Prequel, Celestia

, which tells how the fabled Queen Solaria ended up becoming Princess Celestia through Discord's interference in Equestria's distant past.

Due to many Late Arrival Spoilers all post-Stardust content will be placed in their own sections.