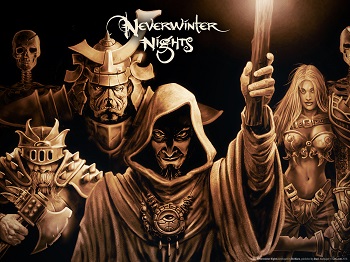 The Frozen North: the name given to the stark and unforgiving frontier that lies beyond the High Moor of Faerun... A bleak wilderness where barbarian clans and tribes of giants roam the land and fierce dragons rule the skies.
But amidst the frozen savagery stands a bastion of civilization: the city of Neverwinter, Jewel of the North. Behind the city's high walls those both hardy and brave carve out an existence from this bleak land under the guidance and protection of the legendary hero Lord Nasher Alagondar.
Yet there are some things that all the courage of the world cannot stand against.
— Prelude of the main campaign
Advertisement:

Two expansion packs Shadows Of Undrentide and Hordes Of The Underdark stepped away from the original campaign and focused on character development, roleplaying, and the intricate storylines for which BioWare is renowned (although only Hordes was actually made by BioWare; Undrentide was instead developed by the Looking Glass expats from Floodgate Entertainment, led by the LGS founder Paul Neurath). These proved to be more popular with fans.

The full game, including the premium modules, is available at GOG.com. In 2017, developer Beamdog announced Neverwinter Nights: Enhanced Edition, which was subsequently released on March 27, 2018 and, later the same year, ported both on Android and iOS. The original campaign was retroactively called The Wailing Death in it.

The original AOL MMORPG from 1991 that shared the same name has its own page.

The Wailing Death provides examples of the following tropes:

Alternative Title(s): Shadows Of Undrentide, Hordes Of The Underdark