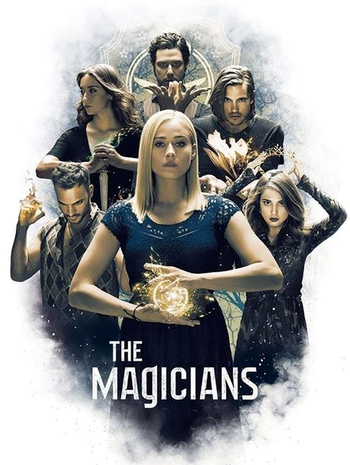 Fantasy gets real.note Clockwise from top: Eliot, Quentin, Margo, Alice, Penny, Julia.
Margo: Magic comes from pain. The best way to get what you want is to be so miserable you don't want it anymore.
Quentin: What kind of system is that? You know, why can't it run on... love? Or cocaine? Or something.
Margo: It's the universe deep-dicking us. Lie back and try and enjoy it.
Advertisement:

The Magicians is a fast-and-loose televised adaptation of the book trilogy by Lev Grossman, that premiered in 2016 and aired for five seasons on the Syfy Channel.

Main character Quentin Coldwater (Jason Ralph) has been a fan of Fillory and Further, a series of fantasy books set in a magical parallel world called Fillory, since childhood. Quentin realizes that he possesses magic of his own, and finds himself entering a Wizarding grad school called Brakebills University. The school offers much excitement and adventure, as well as a colorful host of schoolmates, including the bookish genius Alice Quinn (Olivia Taylor Dudley), Quentin's unfriendly telepathic roommate Penny Adiyodi (Arjun Gupta), the aloof and rebellious Kady Orloff-Diaz (Jade Tailor), and the charismatic and mischievous upperclassmen Eliot Waugh (Hale Appleman) and Margo Hanson (Summer Bishil). Meanwhile, Quentin's best friend since childhood, Julia Wicker (Stella Maeve), fails the entrance exam. She gradually grows obsessed with her newly discovered magic, and endangers herself as she immerses further into New York's magical underground.

When an attack by a mysterious creature called the Beast sets off alarm bells at Brakebills, including blinding the hapless Dean Fogg (Rick Worthy), Quentin discovers that the beloved Fillory of his childhood is not only real, but very dangerous... and he and the others are destined for big things involving it.

The series is a mix of Urban Fantasy and High Fantasy, with the characters splitting their time between the magical land of Fillory and the more mundane fantastic setting of America. It is also a Genre Deconstruction of escapist fantasy — Fillory and Further, in particular, is an obvious analogue to The Chronicles of Narnia. The tropes of works like that and Harry Potter are played with more grit and realism, often at the characters’ expense.

The series concluded in 2020 and can be streamed on Netflix.

Example of:
"Not Wearing Pants" Dream