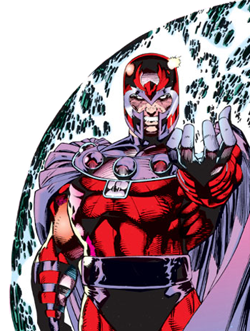 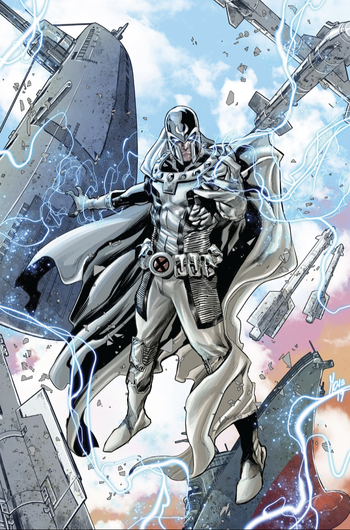 The Master of Magnetism

Advertisement:
"I have been known by many names. Max Eisenhardt. Erik Lensherr. Magnus. Magneto. Each name marks its own sin, and one day I will answer for those offenses. But not today. Only my actions... what I do in the name of all mutants... hold any real meaning."
— Magneto, Magneto Vol. 3 #1

Magneto is a character that appears in comic books published by Marvel Comics, commonly in association with the X-Men. Created by writer Stan Lee and artist Jack Kirby, the character first appeared in The X-Men #1 (September 1963) as the Arch-Enemy of the X-Men.

The story of his life, however, begins rather earlier — a Jew, he was born in Weimar Republic Germany in the late 1920s before moving to Poland with his parents in 1939... and you can venture a guess as to the end result of that. As a young man, he witnessed and endured some of the very worst of what humanity had to offer. His family was murdered when he was just a boy, and dumped in a mass grave before his very eyes; soon after, he was himself sent to Auschwitz, where as a Sonderkommando he was forced, on pain of death, to mete out that same fate to thousands of other innocents at gunpoint, running their gas chambers and furnaces. Lame with hepatitis, all hope and reason crushed under the mad Nazi jackboot, he was ready to admit that so many times he was tempted to resign himself to his black fate.

But if Max Eisenhardt was anything, he was a survivor.

The one good thing he remembered from those years was his darling love, Magda, a Romani girl interned with him, and during the October 7 revolt in 1944 the pair managed to make their escape. They fled to the Ukraine and lived out the remainder of the war and its aftermath in relative peace with her family, and Magda bore them a daughter, Anya. They were happy together, though he hid from his wife a great secret he was only just uncovering himself — he was a mutant, born with the power to manipulate magnetic fields and master the entire electro-magnetic spectrum.

Their peaceful life was not to last. While they lived in the then-Soviet/now-Western Ukranian city of Vinnitsa

(alas, the Romani lifestyle did not suit him), he was cheated out of his pay by his employer and, in anger, used his powers consciously for the first time by throwing a crowbar at him through sheer will alone. In retaliation, driven on by fear of what they could not understand, the people of Vinnitsa formed a mob and burned down the inn where Magda, Anya, and he were living. When he saw his daughter's burning body fall out of her room, prevented from helping her by KGB agents who held him down and battered him repeatedly, he did not take it well. He unleashed the fury of his newfound powers, killing the thugs who held him down, the mob who killed his daughter, and tearing a chunk of their city to the ground. Magda survived, but his power, and his temporary insanity, terrified her into fleeing, leaving him alone to bury their daughter (and when Soviet troops attempted to stop him from doing so, he turned their guns on them and pulled their triggers).

It would be decades before he found out that Magda had been pregnant when she fled. He never saw her again, for she died shortly after giving birth. His last memory of his wife is of her screaming in horror and terror at him.

With pain and anguish and the torment, he fled Europe, and began traveling, eventually making his way to Israel where he did volunteer work in a psychiatric hospital for Holocaust survivors, those who were overwhelmed by the sheer barbarity of it all. Another volunteer at that hospital was a young American named Charles Xavier, and he was destined to be his best friend and greatest enemy. He and Charles discussed many things, foremost amongst them the subject of mutantkind's coexistence with the rest of humanity and the consequences humanity faced with the rise of mutants, though neither revealed to the other that they were mutants.

He saw once and for all that Charles' views and his were incompatible once they were drawn into battle with the Nebulous Evil Organization known as HYDRA, who had abducted their friend Gabrielle Haller because she knew the location of a hoard of Nazi Gold. They both revealed their powers that day and overpowered the HYDRA agents, Xavier with his boundless telepathic might and Erik with his ever-growing mastery over the forces of magnetism. Following the battle, Erik, realizing that his and Xavier's views were incompatible, took the gold for himself and left.

The final nail in the coffin was when he worked for a Western intelligence agency, tasked with hunting down Nazi war criminals while maintaining his cover as a Double Agent for Mossad, and handing them over to Israel for trial. He had fallen in love again with a woman named Isabelle, but his Western masters — who had been well aware of what he was up to, but had up to now condoned it — decided that his latest capture, Hans Richter, was too valuable to surrender to his fate. They recruited him and murdered Isabelle right in front of his eyes, for which he hunted down each one of his controllers and paid them in kind.

In the face of ever growing anti-mutant persecution, he remade himself as Magneto, a living example of mutant superiority, of mutant existence, so as to make a statement that mutants no longer had to hide in the shadows. He declared war on humankind, because he concluded that force was the only thing humans understood, and the only thing that would save mutants from an identical fate. Xavier, now wheelchair-bound, made clear he opposed his plans, and he clashed time and time again with his band of mutant heroes, the X-Men. They thwarted plan after plan, and battled him and his Brotherhood of Evil Mutants, amongst whom were two bitter young mutant twins called the Scarlet Witch and Quicksilver — whom he later learned were Wanda and Pietro, his children by Magda, though unfortunately for him only after his radical ways had proceeded to alienate them from one another. He later found himself leading a second supervillain team, the Acolytes of Magneto who not only believed in his cause of mutant supremacy but went so far as to worship him as a divine mutant messiah.

In the face of endless opposition, from his own kind and his own children, as well as non-mutant superhumans such as The Avengers, who accepted Wanda and Pietro into their ranks, he learned to soften his stance somewhat. He has even joined the X-Men himself from time to time, and worked with them to combat greater mutual menaces. But he still stands by his most core belief. He has seen the lowest depths of human evil; he may have dragged himself from the abyss of his own hypocrisy, but though he is no longer as bent on genocide and domination does not mean for him that mutants are safe. The safety and well-being of his people are of paramount importance, and be assured, he is prepared to do anything to ensure their survival and prosperity, and to avert the repetition of history which would see mutantkind consigned to the death camps.

Because if Magneto lives by any creed, it is this: Never. Again.

Magneto has appeared in: